Riding a century sounded like a good idea when you first signed up. It’s not a race, so there’s no competitive pressure or time limit. You likely registered with at least one friend, so having fun is all but guaranteed. The scenery will be breathtaking. And crossing the finish line will give you undeniable bragging rights. Plus, you’ve biked at least 60 miles in training before, so what’s another 40?

Considering that question is when many people feel the first tendrils of self-doubt. You realize that riding a century is like cycling across Portugal or Italy, or from Philadelphia to Manhattan; that several arduous climbs likely lay between you and the finish; and that 100 miles is long enough to accommodate a range of temperatures and weather conditions. As you continue to mull the distance over, it becomes clear that you’ll be pushing your pedals for at least five hours, and more likely seven or eight.

Still want to do it? Good. The century has been a cycling benchmark for more years than there are miles in the event, and completing one is a considered a badge of honor. Yes, it’s challenging. Yes, you’ll have to log plenty of time in the saddle to prepare for it. But if you follow the tips below, it will also be an experience you’ll never forget.

It’s understandable to feel overwhelmed by the idea of racing 100 miles. Even experienced cyclists pay close attention when the word “century” is mentioned. But the difference between the veteran and the newbie is the ability to trust in his or her training. Put in the work, be smart about how you go about it, and leave the rest to the cycling gods.

In this case, being smart means not overdoing it. In preparing for the Leadville Trail 100 Mountain Bike Race—a torturous, seven-hour grind above 10,000 feet—six-time winner Davie Wiens rarely rode more than five hours during training. What he did do was ride consistently and purposefully, which are the keys to preparing for a century.

Give yourself at least three months, and each week, do one long ride and two to three shorter ones. For the long ride, start with 40 miles at your goal century pace, and add five miles every week or two, but don’t go above 75 miles. The shorter rides can be less than 30 miles, but should have some intensity to them—on an open stretch of road (preferably with a slight grade), do two or three intervals that take you out of your comfort zone. Also hit the gym once a week (strength training is hugely beneficial for endurance athletes), and make every fourth week a recovery week, reducing your total mileage by up to 50 percent and not doing more than one interval workout.

Ride promoters are usually good about setting up aid stations. It’s common to encounter four or five during the course of a century, and the spread is usually generous. At a minimum, there will be water, a sports drink, and an assortment of snacks, so don’t pack your own. Carry two water bottles maximum. Those alone will weigh about three pounds. There’s no reason to carry more fluids or fuel when you’ll encounter a refreshment oasis every 20 miles.

That said, if you’re new to long-distance riding, it might take a few rides to nail down your nutrition. There’s a good chance you’ll bonk (run out of blood sugar and glycogen) at some point—or just start feeling generally rotten towards the end. With this in mind, it never hurts to stow an emergency gel in your jersey pocket, as well as a small snack that you know you like, so that when you hit the aid station at mile 86 and all they have are PB&J sandwiches and grapes and you hate both and you’re tired and you want to go home and whose stupid idea was this anyway, you have a little something familiar to take the edge off.

It’s also smart to check what the aid stations will have in case there’s something that doesn’t agree with you. When in doubt, carry your own hydration supplement (like Beachbody Performance Hydrate) to mix with water to keep the electrolytes flowing. 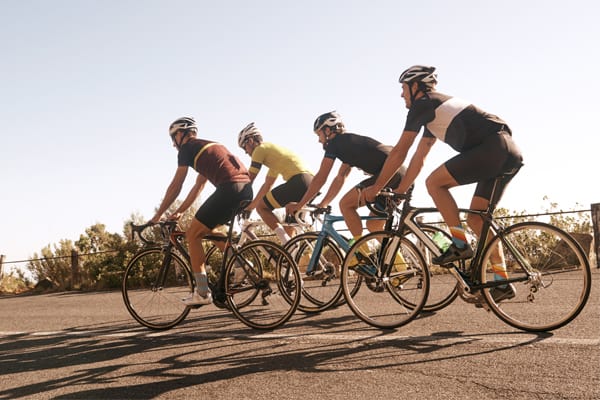 Contact points (hands, feet, and butt) are critical areas for a cyclist, and they need familiar surroundings on century day. Don’t take any chances with untested equipment. The urge to showboat new gear can be strong—especially if you’re cycling with buddies—but a 100-mile ride is not the time to do it.

New shoes, in particular, should stay at home. Think of all the pedal revolutions you’ll be doing: 80 per minute x 60 minutes x six hours or more. Now think of doing them in a pair of brand new (i.e., incredibly rigid and unforgiving) shoes. Our thoughts exactly. Pair your broken-in shoes with socks that also have some training miles to keep your dogs from barking.

Similarly, your saddle should be like an old friend—comforting and supportive. If you’ve spent less than six hours with it, it’s still a new acquaintance and shouldn’t be allowed anywhere near your body on century day. Same goes for your kit.

Gloves and tape are the possible exceptions to the “no new gear” rule. It’s fine if they’re new, but it’s better if they’re not. Logging a few rides with them before the big day can go a long way towards keeping your hands happy.

Deciding what to wear on century day is just as important as not wearing anything new. It can also be challenging, as a century can last from morning until late afternoon and take you through a range of temperatures, microclimates, and weather conditions. Weather also has a nasty habit of defying long-range forecasts, so check it often, check it for locations throughout the race, and keep checking it right up until the day of the event.

Also, don’t forget to pay attention to the wind predictions. Wind is often an overlooked element in cycling, and it’s a good idea to know what its direction and speed will be along the route throughout the day so you can manage your effort accordingly. If a headwind is forecast for the last 25 miles, it’s good idea to conserve your energy during the first 75.

If at all possible, tackle your first century with at least one friend. A riding partner (or two or three) makes the day much more enjoyable, allowing you to not only pass the time with conversation, but also draft off of one another.

If you’ve ever watched NASCAR, then you’ve likely heard of drafting. A driver will tuck in behind another car to cut wind resistance and conserve fuel (i.e., energy). Cyclists do it, too. A rider in the draft works 30 percent less intensely than one in the wind. That’s a boon during any ride, but when you’re doing 100 miles, it can be a lifesaver, especially in a headwind.

Drafting requires you to ride within a bike-length of the person in front of you. That can make new cyclists nervous, so if you’ve never done it, practice beforehand. If you’re riding in a group, the lead rider should peel off and rotate to the back every 20 seconds or so. If it’s just you and a friend, take longer turns (40 seconds).