Ever open up a menu at a hot new restaurant and feel like it’s in a different language? Or read about the latest trendy food, only to realize you have no idea how to say it and are too afraid to ask? You’re in good company, my friend.

Find out which foods you might be pronouncing wrong — and how to eat them.

This is a small, dark berry native to Central and South America. You’ve probably seen açai in some form on the menu at coffee shops, smoothie stores, and brunch spots or spotted in the frozen purée at grocery stores. (Acai spoils too quickly to be sold fresh outside of its native habitats.)

How to say it: ah-sah-EE

How to eat it: Purée it with other berries and your favorite juice or milk (or half a banana or avocado) until thick and smooth. Pour into a bowl, and top with your favorite fruit, seeds and nuts or granola.

Everyone’s seen and tasted this delicious Italian appetizer — grilled bread rubbed with garlic and drizzled with olive oil. Bruschetta is usually topped with chopped tomatoes, vinegar, garlic and basil, but these tasty toasts can be topped in more creative ways: Try them with your favorite cheese and meat or with beans and chopped veggies.

How to say it: broo-SKET-uh

How to eat it: In summer, you can’t go wrong with the classic tomato-garlic-basil-balsamic combo. In fall and winter, swap in roasted butternut squash cubes with sage and fig jam. In spring, use marinated artichokes or a parsley pesto. Or make a meal out of it with this Chicken Bruschetta recipe.

Pro tip: In Italian, the stress usually falls on the penultimate (second to last) syllable of a word. 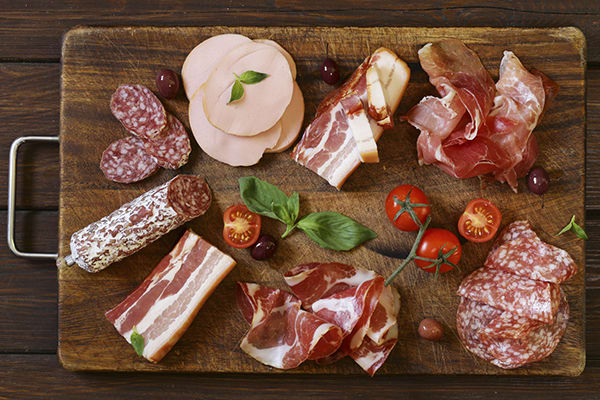 What we call deli or lunch meat and sausage, the French call charcuterie. Charcuterie meats tend to be higher in salt and fats, which is why they’re often served as shared appetizers. Charcuterie — a general term for cold cooked meats — sounds way more appealing than the English translation. Fun fact: Charcuterie was originally a way to preserve meats.

How to say it: shar-COO-tuh-ree

How to eat it: These meats are often highly seasoned and flavorful, so a little goes a long way. Put together your own to control the ingredients, and serve it at your next Walking Dead watching party.

Crudités are traditional French appetizers of raw vegetables served with vinaigrette or a dip. They’re what we call “veggie trays.” (The French can really make anything sound fancy!)

How to say it: CROO-dih-tay

How to eat it: Crudité platters are perhaps the simplest appetizer there is, and they’re a clean eater’s BFF. Serve your favorite vegetables with Spinach Dip or French Onion Dip. Think beyond the usual carrot-and-celery combo, and use halved radishes, jicama slices, baby asparagus, green onions, snow peas, broccolini or endive leaves.

This is a smoky spice that’s commonly used in Mexican, Indian, and Mediterranean cooking, and cumin seeds can be used both whole and ground. Cumin is also a natural carminative, meaning it can help your body get rid of gas.

How to say it: COO-min

How to eat it: Add ground cumin to your taco and burrito seasoning mix and blend into Indian dishes. Stir whole seeds into rice before cooking for extra flavor or mix it into your favorite grilling spice blend. Or try these Cauliflower Nachos, with a smoky boost from cumin.

Edamame is the Japanese term for young soybeans, which are served steamed or boiled in the pod with salt. This sushi bar staple is perfect as an appetizer or as a healthy snack that’s filled with fiber and protein.

How to say it: ed-uh-MAH-may

How to eat it: Pop the beans from the pods, and discard the fuzzy, fibrous shell. Serve them tossed with a smoked salt or sprinkle on gomashio, a sesame-based Japanese spice blend, for more flavor. Use shelled edamame (available in the frozen vegetable section of most supermarkets) in stir-fries or in place of chickpeas in hummus. Or try this Edamame and Radish Salad With Avocado. 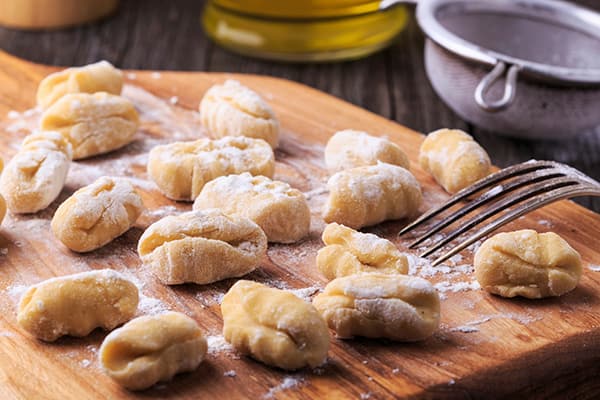 Gnocchi are soft, round dumplings usually made with potatoes and flour, but they can also be made with cheese, egg or other root vegetables.

How to say it: NYO-key

How to eat it: Whether you buy them or make them from scratch, gnocchi can be paired with just about any pasta sauce. Try classic potato gnocchi with Basil Pesto, beet gnocchi in place of the pasta in this Pasta With Kale and Turkey Sausage dish or spinach gnocchi (purée steamed spinach before adding to the dough) with marinara sauce.

Jicama is a large, starchy root vegetable that’s eaten both raw and cooked. Common in Mexican cuisine, it tastes like a starchy apple that’s more savory than sweet.

How to say it: HE-kuh-muh

How to eat it: Slice it into matchsticks and add to your favorite slaw or salad, or slice and serve them on a crudité platter.

Kefir is a fermented milk beverage from Eastern Europe that’s like a sour, drinkable yogurt. Packed with probiotics and protein, it’s usually found in fruity flavors in the U.S., though you can also just drink it plain.

How to say it: kuh-FEER

How to eat it: Use kefir as the base for your next smoothie, or go the savory route and stir in minced garlic and fresh herbs for a tangy dip or sauce. You can also pour it over granola and fruit.

A macaron is a light, crispy meringue-based cookie made from sugar, almond flour and egg whites. These French confections are sold in a rainbow of pastel hues and sandwiched with various creams. Macaroons, on the other hand, are coconut cookies made with sugar and egg whites, and sometimes dipped or drizzled in chocolate.

How to eat it: If you’re an experienced baker, try your hand at delicate macarons and flavor them with everything from rose and orange to pistachio and almond. Macaroons are a bit simpler, so these Coconut Macaroons With Dark Chocolate Drizzle are a great start.

How to say it: NEE-swahz

How to eat it: Whip up your own Niçoise-inspired salad. Start with a bed of lettuce or other dark, leafy greens, then top with various veggies and your protein of choice. Add olives and vinaigrette for flavor.

Pho is a Vietnamese noodle soup made with broth, rice noodles, thinly sliced meat and herbs. The broth is usually either chicken or beef, plus ginger, star anise, cinnamon, cloves, and other spices.

How to say it: FUH (Remember it this way: Faux is false!)

How to eat it: Nothing beats the real deal, but you can make fast pho at home by simmering your preferred spices in store-bought broth (low-sodium), then adding rice noodles, thinly sliced beef or chicken (or tofu cubes), cilantro and mint. Serve with bean sprouts and lime wedges. 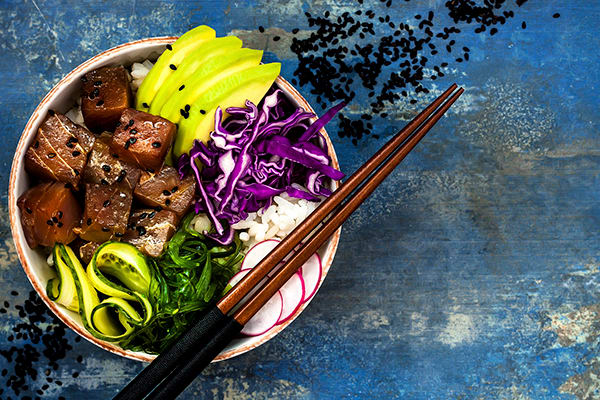 A traditional Hawaiian dish that consists of seafood marinated in soy sauce, poke bowls have caught on here on the mainland. They’re clean, low-carb and fairly easy to prepare if you have the right ingredients.

How to eat it: Use only the freshest seafood. If you’re not a fan of raw fish, you can create a vegan version with sea vegetables and tofu. Try Tuna Poke with Avocado or Salmon Poke with Macadamia Nuts.

A pseudograin (a seed that’s eaten like a grain) that hails from Peru and Bolivia, quinoa is gluten-free and a complete protein, meaning it contains all nine essential amino acids that our bodies need but can’t produce.

How to say it: KEEN-wah

How to eat it: Swap it for rice in stir-fries or sushi, or toss with finely chopped herbs, veggies and a tangy vinaigrette for a quick plant-based meal.

Seitan is wheat gluten that’s been mixed with water or broth and seasonings, then simmered or braised. Vegans and vegetarians often use seitan as a protein-rich meat swap, since it has a chewy texture. You can make it from scratch, using vital wheat gluten (available at most larger supermarkets) and vegetable broth, or buy it pre-made and pre-seasoned.

How to say it: SAY-tahn

How to eat it: Slice it, pan-fry it, and serve as you would chicken or beef cutlets. Or finely dice seitan, season as you would taco meat, then pile onto tortillas with all your favorite fixings.

This hugely popular hot sauce with the iconic rooster label is a bona-fide food star: a whopping 20 million bottles were sold in 2012 and it’s spawned all kinds of swag, from t-shirts and art to cookbooks and even a documentary.

How to say it: see-ROTCH-a

How to eat it: (Don’t you mean, “how not to eat it?”) Seriously, you can put Sriracha on anything: Use it to spice up rice or pole bowls, add it to sauces and salad dressings or mix into your favorite creamy condiments for mild heat.

Seems like you can’t go anywhere these days without reading about the amazing benefits of this golden yellow spice. This earthy, slightly bitter spice is commonly used in Asian and Indian cooking, but it’s popping up everywhere (i.e. every foodie Instagram feed): in smoothies, puddings, and milk.

How to say it: TER-muh-rick (don’t forget that first R!)

How to eat it: Try turmeric in tahini-based salad dressings, on top of popcorn with nutritional yeast, in scrambled eggs or tofu scrambles, and in miso soup.

10 of the Healthiest Microwavable Meals