If you’re not a fan of cooking, the raw food diet may sound like a dream come true.

But does it make sense to limit your diet to only raw foods? Can a raw food diet help you lose weight? And why would you shun healthy foods like roasted broccoli or steamed quinoa?

Here’s what you need to know about the raw food diet.

What is a Raw Food Diet?

A raw food diet is one that excludes cooked foods and relies heavily on raw fruits and vegetables, with smaller amounts of raw or soaked and sprouted nuts, seeds, grains, and some pulses. Raw food diets are trendy, and some might be as extreme as a mono diet. Others include a more balanced mix of food groups.

However, the raw foods movement dates back to the early 20th century, when a Swiss doctor named Maximilian Bircher-Benner published his work on the benefits of eating “a balanced diet of raw vegetables and fruit.” His research was based on the second law of thermodynamics, which states that the more energy is changed or transferred (i.e., through cooking), the more it’s wasted or lost.

He also pointed out that no other species cooks their food. (Fun fact: Dr. Bircher-Benner is known for creating the original overnight oats, still known as bircher muesli in Europe.)

Today’s raw diets stick with Bircher-Benner’s “raw is better” philosophy, but most adherents follow their own interpretation. “Just like a vegan diet, there are some raw food followers who may be more lax or stricter,” says Krista Haynes, R.D., C.S.S.D., and nutrition manager at Beachbody.

“While there isn’t one set macronutrient breakdown or a master ‘eat this, not that’ food list that spans all raw food dieters, there are certain ‘rules’ that they follow — mainly the idea that the majority of your diet consists of raw foods — meaning foods that haven’t been ‘cooked’ above 118 degrees Fahrenheit,” she explains.

But, raw foodies sometimes deviate from those rules. “Some choose foods that aren’t heated at all, some choose to soak or sprout foods, some rely heavily on foods higher in fat while others may rely more on low-cal fruits and veggies, and some may even eat raw meat or eggs,” says Haynes. 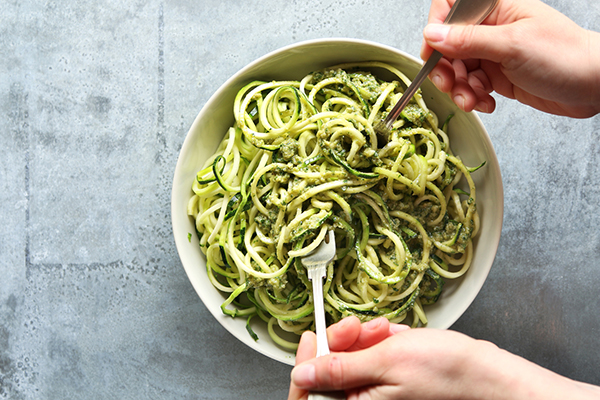 What Can I Eat on a Raw Food Diet?

Raw food devotees believe food is healthiest when eaten in its natural, uncooked form. As the theory goes (and remember that not all theories are proven), cooking food can produce toxins and zap the nutritional value of foods. What can you eat on a raw food diet? If you don’t need to cook it, you can eat it.

Once you remove heat from the equation, it automatically rules out any foods that you need to cook in order to enjoy them — like pasta, rice, beans, and meat (though some fringe followers due eat raw meat and technically sashimi would be allowed).

And because veggies can’t be baked, boiled, sautéed, or stir-fried, that means healthy swaps like zucchini noodles and cauliflower rice are only allowed if you eat them raw.

It also eliminates foods that are heated before they get to you — like pasteurized dairy, processed foods (even frozen and canned fruit or vegetables would be off-limits), and pretty much everything containing refined sugar, caffeine, and alcohol.

If that sounds a little intense, you’re right — the raw food diet is one of the strictest plans out there. Raw food followers typically aim to eat raw most of the time, but there is a little bit of wiggle room.

Still, a raw food diet plan will mainly consist of dark leafy greens, other fresh produce, sprouted grains, nuts, and seeds, and maybe some sashimi if you’re not following a raw vegan diet. 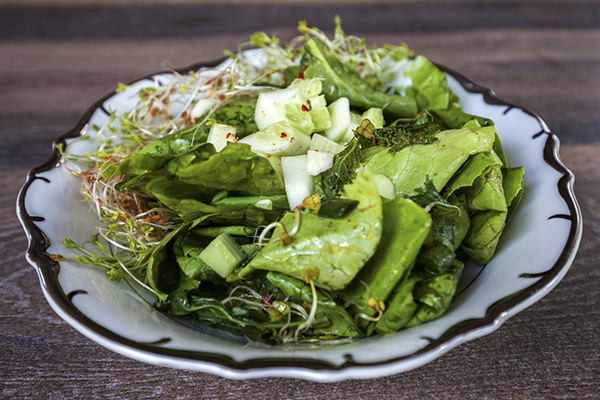 Is a Raw Food Diet Good If You Hate Cooking?

Remember how we said a raw food diet might appeal to you if you hate cooking? Well, since food is allowed to be heated to a certain temperature, plenty of cooking techniques are “allowed” on a raw food diet. You could eat foods like “live” lasagna, beet ravioli with cashew cheese, and apple pie with a walnut-date crust.

How is that possible? On a raw food diet, dehydrating, soaking, and sprouting can replace roasting, sautéing, and stir-frying, but because the temperature can’t exceed a certain range, the “cooking” time often goes up. Instead of minutes, recipes are measured in hours — especially those that require a dehydrator.

And even if dishes are truly “raw,” they will require you to prep all that produce. So, if you’re looking for an excuse not to spend time in the kitchen, a raw food diet will disappoint you.

What Are the Benefits of a Raw Food Diet?

We’ve established that a raw food diet may feel overly restrictive, and it can be more time-consuming than you’d expect to prepare your “raw” meals. But what are the benefits of a raw food diet? There is one clear upside: You’ll eat more whole foods — and a whole lot less junk food. That’s definitely a good thing.

“The single biggest benefit of a raw food diet is that many of the foods we traditionally consume raw — like salad, fruits, nuts, seeds, and certain whole grains — are among the healthiest foods available for human consumption,” says Andy DeSantis, R.D., M.P.H., a dietitian based in Toronto.

But are raw foods really more nutritious than cooked foods? It depends. Research does suggest that certain types of cooking can produce more potentially harmful substances called heterocyclic amines than others. And of course, a diet that revolves around fast food and refined sugar isn’t going to be the healthiest choice.

As far as cooked vegetables go, however, it’s a little less clear-cut. Some veggies do lose a bit of their nutritional value during the cooking process. For example, broccoli loses about one-third of its vitamin C content when boiled (but it loses almost none when it’s steamed). 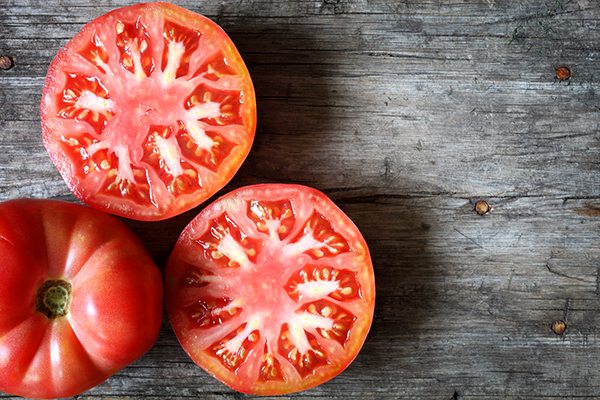 And there are plenty of other reasons to cook certain foods: “There are certain foods that many people find easier to digest when cooked, including raw veggies,” says Haynes. “And some foods are inedible or unsafe to consume if not cooked, like beans, grains, and animal proteins.”

While there are enzymes in raw foods, they aren’t necessary for digestion. “Digestive enzymes are produced in the body, so we don’t need to eat enzymes through food for proper digestion,” she says.

One more important factor to consider — if you don’t like raw veggies, you’re not going to eat them. Case in point: I like roasted cauliflower, but there’s no chance of me crunching on raw florets.

So even if cooking cauliflower lowers the nutritional content slightly, it would still be better than the zero vitamins and minerals I’d get if raw cauliflower were the only option and I opted not to eat it.

“For those who don’t like the taste of raw vegetables, it’s much better to eat cooked versions than none at all,” says Haynes. “The best thing is to choose a variety of foods, both raw and cooked, for a well-rounded, nutritious diet.”

DeSantis agrees: “The best advice is to enjoy a variety of vegetables, prepared in a variety of different ways.”

What Are the Risks of a Raw Food Diet?

What are the risks of a raw food diet? First and foremost, the raw food diet is restrictive. And, as you know, when a diet is too restrictive, it’s harder to stay on track for the long haul. “It’s hard to eat out, or on the road, or at social functions,” says Ashvini Mashru, R.D.N.

Also, because there are so many foods on the forbidden list, getting the nutrients you need can be a challenge. “Raw food diets are extremely limiting and are often lacking in essential nutrients,” Haynes says.

If you’re trying to subsist on raw foods alone, it could even “…be dangerous if not planned out in advance,” she cautions. “It is doable but would need extreme attention to detail that the average Joe would most likely find difficult.”

Take protein, for example — not only is the raw food diet typically meat-free, but some of the best vegetarian sources of protein are also banned, so it’s even hard to get your recommended intake. Yogurt and cottage cheese are typically pasteurized, for example. And eggs and most beans need to be cooked, while tofu is prepared in such a way that it’s not a raw food.

Then there’s the issue of fiber, one nutrient that you do get plenty of when following a raw diet. Most of us don’t get enough fiber, but there can be too much of a good thing. Suddenly switching to a high-raw or all-raw diet may drastically increase your fiber intake. While there’s no specific quantity of fiber that is considered too much, Haynes says, “it’s best to increase fiber intake slowly to allow your body time to adapt.”

She advises drinking of plenty of water to keep that fiber moving through your system, or it could cause constipation. “This is the exact opposite of what one may expect after a large dose of fiber,” she says. “If someone is following a raw diet and realizes certain foods aren’t agreeing with them, then make adjustments just like you would on a non-raw diet.” (That is, choose foods higher in healthy fats and protein and lower in fiber.)

“Nutrient deficiencies while following a raw diet are way more likely to come from lack of consumption of certain nutrients from foods or inadequate supplementation versus nutrients bound by consuming too much fiber,” says Haynes.

Will a Raw Food Diet Help Me Lose Weight?

Eating more fruits and veggies — and fewer processed foods — is always a healthy habit. And needless to say, if you banish pasta, burgers, chips, and cookies from your diet, you’re probably going to see some positive results on the scale. But it’s not the lack of cooking that will suddenly spur your weight loss.

“There is nothing necessarily magical about a raw food diet that will cause you to lose weight,” DeSantis says. “But eating more healthful, nutrient-dense foods may help you better manage your weight.”

You can get those benefits from a plant-based diet (like the vegan version of 21 Day Fix), without swearing off beans, grains, nuts, and all those other healthy staples that make your meal plan more manageable. And the restrictive rules of the raw food diet can make it hard to sustain over the long term, so you may not stick with your raw food eating plan long enough to lose weight.

There’s no reason to stop cooking your food. If you’re in the mood for raw peppers or sprouted lentils, awesome. But if you’re craving roasted chickpeas, cauliflower nachos, or grilled veggie skewers, start cooking! There is nothing magical about raw foods and harmful about cooked ones.

If you feel inspired by the raw food diet, Mashru suggests adding some raw food recipes to your meal plan. But getting too hung up on following a plan “perfectly” can get in the way of your weight-loss goals, so focus on getting more lean protein, fruits, veggies, whole grains, and healthy fats in your diet — and stress less about how they’re prepared.