The name of the game when it comes to human survival is adaptation. When you do a hard workout program or a low-calorie diet, your body doesn’t know you’re doing it on purpose and it doesn’t know how long this new stress will continue, so it adapts to survive the new situation with minimal breakdown — and that can lead to plateaus.

And that puts you in the odd position of having to outsmart your body in order to get results. Luckily, you have zigzag dieting — the most powerful tool in your nutrition arsenal for adjusting your diet to deal with these plateaus.

What Is a Zigzag Diet?

Also referred to as “refeeding” in bodybuilding circles, it’s a technique I’ve been using for years — and it’s super simple to figure out.

For the purposes of this article, we’ll be looking at zigzag dieting as a plateau-busting tool, so your caloric baseline will be whatever you’re eating when that plateau kicked in. You may be an endurance athlete eating 3,500 calories a day and struggling to perform, or someone trying to lose weight at 1,200 calories.

Just keep in mind that if you’re down at 1,200 calories and not losing weight, in all likelihood you’re not eating enough, so don’t go below 1,200 when you zig and zag.

No matter which plan you follow, your body will tell you if it was a good idea. Your workouts should improve almost immediately and/or the scale should move within the week.

How Many More Calories Should I Eat? 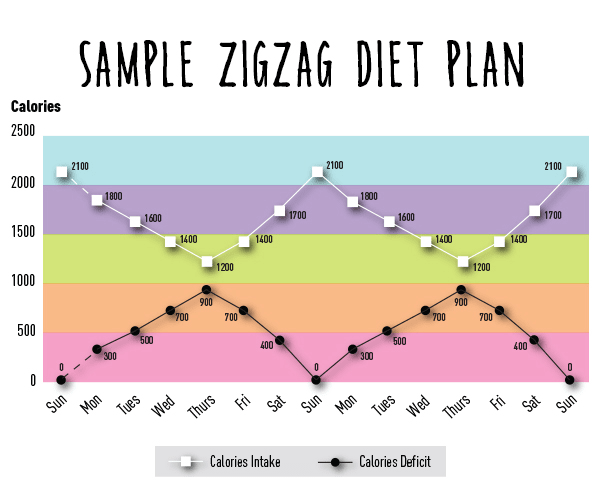 The bigger and more active you are, the higher number of calories you should add or subtract. Most people move in a 200 to 500 calories per day range (or more, as you can see in the image above, though that’s more of a deficit than I’d use unless I was well versed in it). Most people will stay in the 200- to 300-calorie range. For others, such as serious athletes, 400+ calories comes into play — but don’t get too caught up in the numbers.

For the most part, zigzagging is fine over long periods of time. However, when it comes to weight loss, once you’ve reached your goal, you’ll want to push your overall daily calories more toward the higher side of the zag.

Also, your body can also get wise to the tactic and resume your plateau. When this happens, increase your diet on all days by 200 to 300 calories.

How Is Zigzagging Different From Intermittent Fasting and Yo-Yo Dieting? 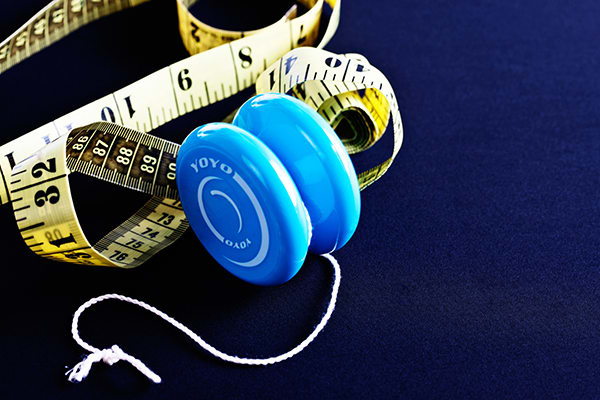 Unlike yo-yo dieting, zigzagging won’t negatively affect your metabolism. Yo-yo dieting means eating at an unhealthily low calorie count for weeks at a time — and then binging all the hard-lost pounds back. Eating like this puts your body into a stress state for a prolonged period, which can wreak havoc on your stress hormones.

On the other hand, zigzagging has you eating different amounts each day in a controlled, sensible fashion, which is more of a natural way to eat. If anything, it has the opposite effect on your hormones, convincing your body that you’re in less of a stress situation, so it’s less inclined to hold onto emergency fuel stores (body fat) or slow down energy systems.

With zigzag dieting, you continue to eat the whole time, just in different amounts — and you’re trying to minimize the stress state. While neither is backed by overwhelming scientific research, both have decades of anecdotal evidence in fitness circles backing them up, so I recommend trying both.

How a Zigzag Diet Can Break a Plateau 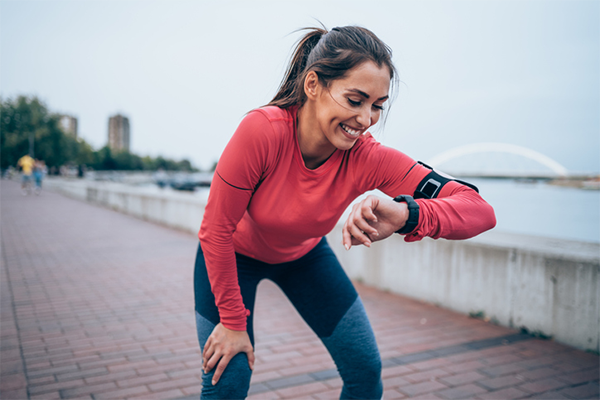 Say, for example, you’re eating 1,500 calories a day and you’ve lost weight. But now your weight loss has stagnated. That’s because the new, fitter you has a different body composition than the former you. You have more muscle and a higher basal metabolic rate (BMR) — the calories you burn in a day just by existing.

In order to continue your weight loss, you need to eat more, because 1,500 calories isn’t enough, causing your body to react in a number of ways, including slowing down your metabolism and actually reducing the amount you fidget. (Yes, fidgeting burns calories.)

Let’s say you run a calorie calculation and determine that you need to 1,500 calories per day. (Here’s an article to help you figure out how many calories you should be eating.) You don’t want to jump straight up to 2,500 calories. First, it would cause some shock to your system and second, calculators — even sophisticated ones like the Mifflin St. Jeor equation — only give ballpark figures, so you’re not 100 percent sure of the first number, you can’t be certain of the second one, either.

The most effective thing to do is to subtly zigzag your caloric intake, basically shifting calories in small amounts that don’t overshoot your needs, but are still dramatic enough so that you can observe if they’re helping.

In this instance, I would recommend eating 1,800 calories per day three to four a week and 1,500 calories on the other days. Note how your body responds. My expectation is you’d feel good on the higher calorie days and famished on the lower calorie days.

If I’m wrong about feeling famished and it’s working, stick with it. If you are famished, after a week or two, bump up your calories to around 2,200 calories for four to five days and 1,500 calories on two days. Do this for about a week. If you’re still starving on the low days, try bumping them up to 2,000 and see how you respond.

You can tell when you’re eating too many calories because you feel full and you’ll feel more lethargic at the beginning of workouts. You want to be energized, but not hungry and not stuffed. In other words, once you get it down, you should be getting results while feeling great. Sounds like a good plan to me!