Let’s be honest, when it comes to physical attraction, women often look for men with a little meat on their bones. Muscles represent resilience, toughness, and — again with the honesty — sexiness! During college, there was a reason why my roommate would always demand that we “go where the biceps are.” Why? Because biceps are hot. And they’re an easy muscle to show off. In fact, I’ll bet that you’ve been “showing” your strength by flexing your biceps — even those string bean “biceps” that you so valiantly rocked back in sixth grade. Think of the flex you could have with stronger, better biceps.

But, biceps aren’t just for the boys. Ladies, if you want lean, sculpted arms like Jennifer Aniston, Jessica Biel, or Cameron Diaz, biceps workouts are absolutely essential. Slimming down your arms by lifting weights will give you biceps that will make you look that much more amazing in your tank tops, little black dresses, and your bikinis on the beach this summer! Oh, and don’t be concerned that you’ll “bulk up.” You will build muscle, but since muscle is denser than fat, you’ll look lean and defined — not Hulk-like.

However, biceps aren’t just about beauty. The biceps are important for many common functional movements — from loading the dishwasher to hauling heavy boxes. Increasing your bicep strength not only improves your appearance, it can help you go about your daily routine.

Anatomy of the Biceps

The muscle most prominent when someone flexes their guns in the classic “which way is the beach?” pose is the biceps brachii. It belongs to a group of muscles comprising what’s called the anterior compartment of the upper arm. There, you’ll also find the brachialis and the coracobrachialis. We’re going to focus on the first two, which are the prime movers in bending, or flexion, of your elbow.

The biceps brachii is by far the larger of the two flexors, but the brachialis, located underneath it toward the outside of the upper arm, is actually the stronger flexor. That’s due to its proximity to the elbow, making it the prime mover during a biceps curl.

While stretched over the humerus, the biceps brachii isn’t actually attached to it. It’s comprised of two heads — short and long — that flex the arm at the elbow and the shoulder, as well as rotate, or supinate, the hand into a palm-up position. Both heads attach at the scapula, fusing together toward the bottom of the humerus at the upper forearm.

The two muscles are so intermingled, any moves you would perform to hit your biceps brachii will also qualify as brachialis exercises.

5 Exercises to Add to Your Biceps Workouts

Most people work biceps in isolated exercises, working only one muscle or muscle group at a time. Isolated exercises improve the looks of these muscles as well as their overall strength, but it’s important to train for function too.

Functional movements — also known as compound exercises — are movements that help you train for the motions you perform in everyday life. They are multi-joint movements that work several muscles or muscle groups at a time. For example, when you pick up your child, you are not only using your legs and your core, but you are also working your biceps. All together, this is a functional movement or compound exercise.

Work some of these exercises — some isolated, some compound — into your biceps workouts to build the arms of your dreams. All of these moves can also be done with dumbbells, which can force you to put more emphasis on good form to keep each arm equal to achieve better biceps.

The standing curl is the foundation of a biceps-building routine. Start with feet together or with one foot in front and one foot in back if you need more stability. With your arms fully extended at your sides holding a barbell or dumbbell, keep your elbows tucked in close to your body, and slowly curl the weight(s) up. At the top of the curl, squeeze your biceps and slowly lower the weight(s) back down. Make sure to keep your elbows close to your body and don’t let them move at all during your rep.

Place your feet shoulder-width apart or stand with one foot in front and one foot in back. Begin the exercise with both arms extended at your sides, palms facing forward. Slowly curl one arm up to shoulder height and squeeze your biceps at the top. Slowly lower the dumbbell down and alternate arms. Make sure to keep your elbows close to your body and don’t let them move at all during your rep. If your elbows move, you will take the exercise’s focus off of the bicep, which wouldn’t help you build the lean muscle mass you were aiming for. 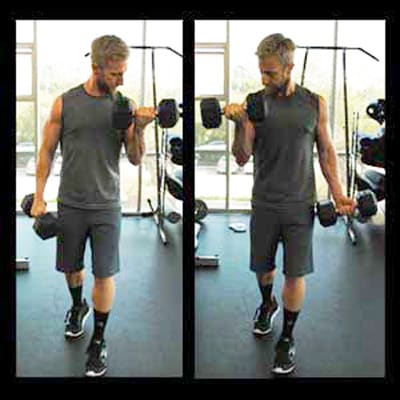 Place your feet shoulder-width apart or stand with one foot in front and one foot in back. Begin the exercise with both arms extended at your sides, palms facing each other. While keeping your palms facing toward each other, slowly curl the arms up to shoulder height and squeeze your biceps at the top. Slowly lower the dumbbells back down. Make sure to keep your elbows close to your body and don’t let them move during your rep. Maintaining control during the downward movement of the hammer curl is just as important as controlling the lift when it comes to building better biceps.

This compound exercise works your biceps, latissimus dorsi, and abdominal muscles, among others. With your palms facing you, put your hands on a chin-up bar, shoulder-width apart, engage your lats, and pull your body up so that your chin goes over the bar. Lower yourself back down so that your arms are completely extended. Repeat. While doing a chin-up, make sure to keep your muscles engaged so that you don’t stress your skeletal structure and its connective tissues.If you cannot do a chin-up on your own, do not fret! Try using the P90X Chin-Up Max, which allows you to adjust the amount of support you get so you can work your way up to unassisted reps.

The supinated bent-over row works the biceps, the latissimus dorsi, the hamstrings, and some of the muscles in the back. Start with your feet shoulder-width apart and your hands on a barbell or with a dumbbell in each hand, palms facing away from your body. Bend over so that you feel your hamstrings engage. Keep your back flat and chest expanded and pull the barbell into your body until it is just below your chest as if you were rowing. Lower the weight(s) back down and repeat.