Love them or hate them, every year more than 35 million pounds of that waxy oxymoron, aka, candy corn, is bought, handed out, and eaten by trick or treaters all across America.

At least five pounds of it sits next to me as I write this; I can smell the sugar wafting from the open packages and it’s giving me a contact high. In this state of mind, let me tell you what I learned about what the heck is actually in them, and how people really feel about candy corn when they stop being polite and start getting real. 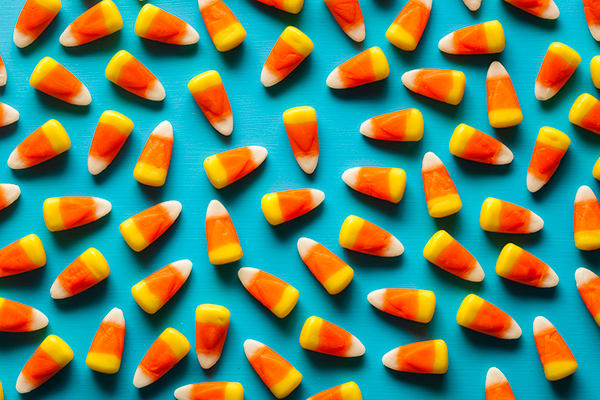 You won’t be be shocked to hear that the dominant ingredients in candy corn are sugar and corn syrup. These are mixed with other flavorings and ingredients to create a wet mixture and could include added sugars like honey or dextrose*.

(Pro tip: Beware of the many names that sugar hides under. Any word that ends in “-ose” — i.e., fructose, dextrose, maltose, glucose — is just another name for sugar.)

Depending on the maker, glazes, fondant, marshmallow, gelatin, carnauba wax, hydrogenated oil, or other oils, are added for texture, bite, and a glossy finish. (Who can resist glossy wax?) Artificial colors are added to the same base to make all three colors.

A serving of classic candy corn is 19 pieces and contains 140 calories and 28 grams of sugar. That’s seven teaspoons of added sugar; for reference, the American Heart Association’s daily limit for sugar is six teaspoons for women and children, and nine for men.

Why Do People Hate Candy Corn?

It tastes like stale, fake stuff
“I’m so confused. What is this trying to taste like?” asked Fred Gooltz, a TV writer and my husband. Trying to put his finger on it, he said, “It tastes like old dried-up doughnut filling. I took a bite of an old rotten Boston cream doughnut when I was eight — it had gotten hard and tasted like very sugary, fake milk product of some kind. This is what candy corn tastes like.”

Artificial colors and flavors come in every bag, and the “real” ingredients include a lot of sugar, more sugar, another sugar, salt, hydrogenated fat, another sugar, and then maybe some waxy stuff. All told, there are anywhere from 12-17 ingredients, mostly sugar. Sure, it’s fat-free and cholesterol-free, but just… no.

Why Do People Love Candy Corn?

Nostalgia
I was surprised at how many of my dietitian colleagues indulge once a year and have a soft spot in their hearts for this tri-colored sugar bomb. Worth noting: The majority are in the hater camp, saying things like “hate it,” “tastes like sugar-coated wax,” “repulsive,” “waxy nothing,” and “ew.”

Because They’re Canadian
“Candy corn? Never heard of it,” said a visiting Canadian I recently met at a party. His aunt, however, gushed that she knew exactly what they were: “My friends are obsessed, they can’t get it there — they beg me to bring it back from my visits to the U.S.”

Because They’re American
Candy corn is an American invention, created by Wunderlee Candy Company employee George Renninger over a century ago. The unique design was a hit and it’s remained unchanged since then, according to the National Confectioners Association.That was in 1880 and about two decades later, Jelly Belly Candy Company (then Goelitz Candy Company) got in on the game, and are making them to this day, among other brands, such as Brach’s. 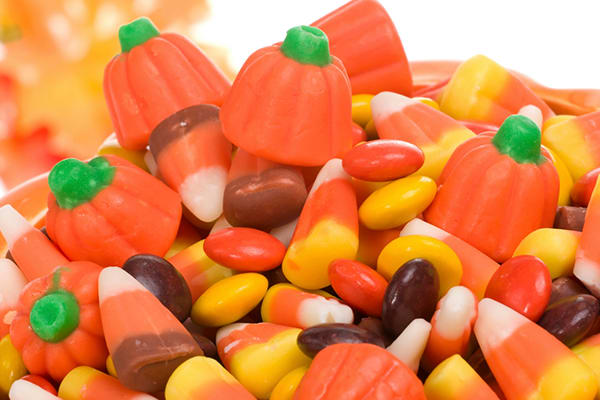 Keep in mind that I do not have a sweet tooth, and do not regularly eat candy corn. Until now, I was an undecided voter. Read on for my unscientific survey of some popular brands and see which one what swayed me:

After much internal debate, my vote goes to: Kroger’s candy corn. The texture is soft and mellow. More importantly, it doesn’t taste overly sweet — relatively speaking. (Unfortunately, that’s just perception, because it has just as much sugar as the others!)

In all seriousness, can candy corn be a little sweet reminder for people with a deep nostalgia for it? Sure. Is it something you need in your life? Absolutely not. Choose wisely — you only get one life.

What Is the Bro Diet, and Is It Healthy?

6 Edible Seeds That Are Bursting With Nutrients