Sagi Kalev likes to make every moment count, and he has a lot to show for it.

He’s created several successful weightlifting programs (including Body Beast, The Master’s Hammer and Chisel, and A Week of Hard Labor), has twice won the title “Mr. Israel,” is both a certified nutrition specialist and a functional diagnostic nutrition practitioner, and has appeared on the cover of more than 50 international fitness magazines.

One thing that helps Sagi connect with the audience is his motivational music mixes.

One of his weightlifting playlists includes classic and current hip-hop songs, hits from Eminem, The Notorious B.I.G. and Jeremih, and inspirational theme music from professional wrestlers Brock Lesnar and Roman Reigns.

And of course, there’s also “Eye of the Tiger,” because what mix of this nature would be complete without it?

“It’s really about having fun. That’s what people are coming for,” Kalev says. “You’re not going to get in shape in just one workout, but there are some things in a live workout that you will never forget.”

One of Kalev’s most important goals for his live workouts is to keep everyone motivated and on the same page, working together.

He’s serious about that and isn’t afraid to take away someone’s phone if they’re using it during his workouts.

“I make it fun — I will sit next to the person on the floor, like, ‘I got your phone now, and you can’t do anything about it because I’m the Beast.'”

Below, Kalev walks us through why he picked certain songs for his weightlifting playlist, and some of his general guiding principles when putting together a mix for his live workouts. 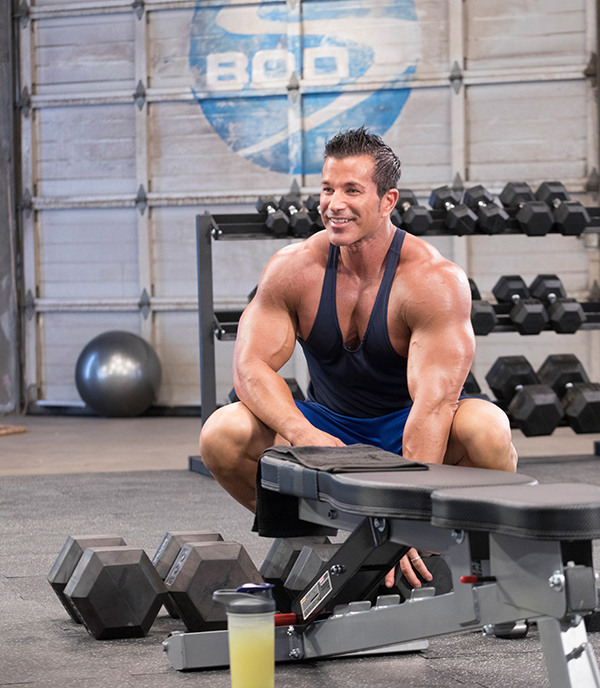 “What I Live For”

“I like the lyrics in this song. I also like the way it starts, how it goes up in the beginning, down in the middle, and then up again.”

“The Next Episode” (featuring Snoop Dogg, Kurupt and Nate Dogg)

“In my mixes there are some songs where I like the intro, or there’s something in the middle I like. Or, the song stops and a speaker talks about something inspiring. Each song is picked on purpose.”

“Eye of the Tiger”

Album: Eye of the Tiger

“This is in Rocky III. Everybody knows this song. It’s kind of fun, and you can do some funny dance moves to it. You can be playful and not so furious.”

“There are a lot of songs that mention being a ‘beast’ or ‘beast mode.’ This a reminder that you’re not in a wimpy workout—you’re in a Beast workout.”

Album: N/A
“Sometimes I like to change the mood of the workout. I’m going to kick your butt, but you will also laugh. You will bust your ass, and you will also have tons of fun.”

“Roman Reigns (Heart of a Warrior)”

Album: Heart Of A Warrior

“Just look at the name of the song. It tells you what it’s about.”

Album: Southpaw (Music from and Inspired By the Motion Picture)

“Eminem has done my Body Beast workouts. When I was filming the program, lyrics from two of his songs were in my locker room, printed on a wall. Each time before I filmed, I read the lyrics and listened to the songs.”

Album: The Remix vs. The Original

“I played the piano for eight years. Just like in dance, or music, you have eight counts. That’s how my brain thinks about moves in a workout, and how to count through them.”

“I wanted a mix of songs that could start with a warm up, then go really high, and then go a little bit lower. It’s like a symphony.”

“Imma Star (Everywhere We Are)”

“You can’t go and just destroy someone during a live workout because there are so many people on different levels. You want to mix it up. I know that after a few high-intensity songs and really powerful moves, we should go to a move that it’s not going to be as hard, which is where this song comes in.”

“I would say that this weightlifting playlist is just another tool for my workouts. You think you’re only coming for a workout, but really, my intention is that when you leave you have gotten something from me that will change something in your life.”

“I’m shaking my booty with this song. At first I’m serious, and then suddenly this song comes on and I’m dancing. It makes everybody crack up. Me being silly and funny and dancing in a workout… people don’t expect that.”

Cue up this weightlifting playlist for your next workout from Sagi, like Body Beast, The Master’s Hammer and Chisel, or his brand-new program on Beachbody On Demand, A Week of Hard Labor, coming out in September.