What makes the squat thrust so effective? Using only your bodyweight, it repeatedly hits many of the major muscle groups in both your upper and lower body, thereby creating a huge oxygen demand and a significant cardiovascular challenge when performed at high intensity. And it only requires about six feet by three feet of floor space.

Together with its more diabolical cousin — the burpee — the squat thrust is a classically challenging movement, so fiendishly tough that drill sergeants, trainers, and exercise instructors often dole out reps as punishment. Arrive five minutes late to your fitness class? That’s 10 reps. Miss an obstacle in a mud race? Thirty reps. Drag your heels through your a basic training run? Fifty reps.

So you’d best learn how to do it right.

At first glance, the squat thrust looks simple: From a standing position, you squat down, place your hands on the ground, kick back into a push-up position, and then reverse the move. But the movement’s benefits — and its potential perils — lie in the details.

When you jump back to push-up position, don’t let your hips sag below the level of your shoulders and heels. This can lead to sudden, forceful extension of the lower back — a recipe for back pain.

As with any exercise, stop and rest if you become too exhausted to perform the move with proper form. Just because it doesn’t involve barbells or dumbbells doesn’t mean it can’t injure you if you do it wrong.

Working with an instructor who insists you squat thrust till you’re begging for mercy? Unless that instructor is named Gunnery Sergeant Patton and you’re three hours from the end of Hell Week in SEAL training, find another instructor.

Even if you’ve never heard of the squat thrust, it’s likely you have heard of the burpee — a move named for exercise physiologist Royal H. Burpee, who invented the movement as a quick way to assess fitness. “A burpee follows the same basic movement sequence, but also includes a push-up and a jump,” says Beachbody Senior Director of Fitness and Nutrition Content Trevor Thieme, CSCS.

Breaking that down a little: The first few steps of the burpee are the same as for a squat thrust — bend and kick your feet out to push-up position. Once there, though, you’ll perform a full push-up — chest to within a few inches of the floor, and then back up again, keeping your body rigid — before you jump your feet forward. Then, from the crouched position, explode upwards, jumping as high as you can while reaching your arms toward the sky.

If you want to make the squat thrust tougher than it already is, in other words, make it a burpee.

Still not satisfied? If you’re a glutton for exercise punishment, you can get still fancier with these options.

Once in push-up position, jump your feet out wide, then back again — as if performing a horizontal jumping jack with just your feet — before standing up.

Instead of standing up to finish the move, jump as high as you can, drawing your knees toward your chest before landing softly and immediately beginning your next rep.

Perform the squat thrust holding two dumbbells throughout the movement. Keep the weights light so you can perform each rep explosively.

What Muscles Does the Squat Thrust Work? 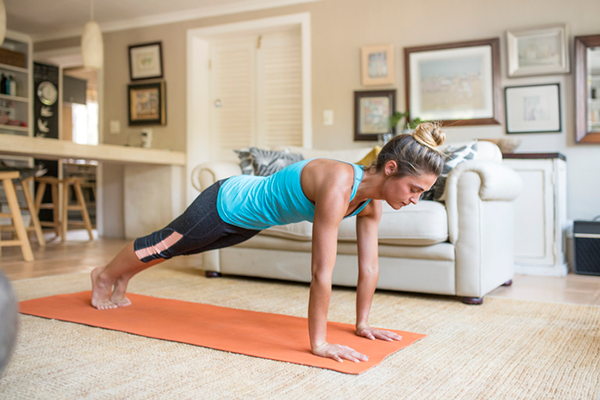 One of the benefits of squat thrusts is that they work so many different muscle groups. Some of the biggest contributors:

Squatting and standing work your glutes, quadriceps, and hamstrings. If you perform a vertical jump at the end of the move, you’ll also hit your calf muscles.

When you assume the push-up position, your chest, shoulders, and triceps engage to keep you properly aligned. If you perform a burpee, they work even harder.

Almost every muscle between your legs and shoulders — including your glutes, abdominals, obliques, and spinal erectors — engages to keep your body stable, your spine supported, and power transferring efficiently between your limbs.