But when you look around the average gym, you see a whole lot of the exact opposite: wasted motion, lousy alignment, shoddy body mechanics, and poor overall form on even the most common exercises.

Never mind that these weightlifters may be getting a pump or a burn in their muscles — they’re also practicing bad movement patterns that can eventually lead to diminishing results at best, and poor posture, bad alignment, and physical harm at worst.

Below are seven common exercises that most weightlifters get wrong — along with how you can clean up your technique on each.

Follow our tips and you’ll not only build more muscle and athleticism, but you’ll also improve proprioception — your sense of body position and alignment — which can reduce your risk of injury and enhance athletic performance.

Your joints will thank you. 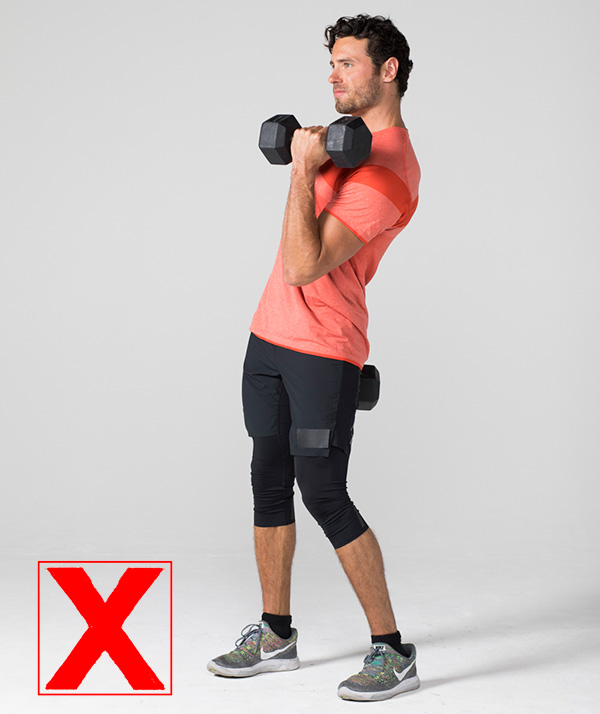 Too much body English.

Curls should be simple — they only require you to move one joint. But lordy, do people figure out ways to screw them up.

They thrust their hips forward to swing the weight upward. They move their upper arms forward to cheat their way through the sticking point. They lift the weight all the way up to their shoulders.

And in the process, they shortchange their results and (worse) increase their risk of injury. 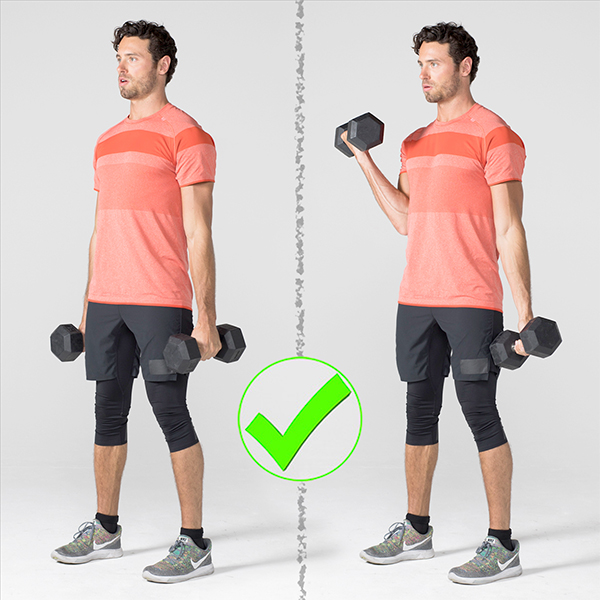 Don’t worry about lifting big weights. Instead, focus on form and using weights that aren’t so heavy they force you to compromise it.

In practice, that means not allowing your elbows to leave your sides, your hips to move, or the weights to touch your shoulders. If you do the exercise properly, they won’t get that far. The only parts of your body that should move are your forearms and hands.

Here’s how to do a perfect curl:

• Stand tall with your feet shoulder-width apart, your hips in line with shoulders and ankles, your back flat, and your eyes looking straight ahead.

• Hold a pair of dumbbells at arm’s length by your thighs, palms forward.

• Keeping your elbows tucked, curl the weights as high as you can without moving your upper arms. Pause, and then lower the weights back to the starting position. 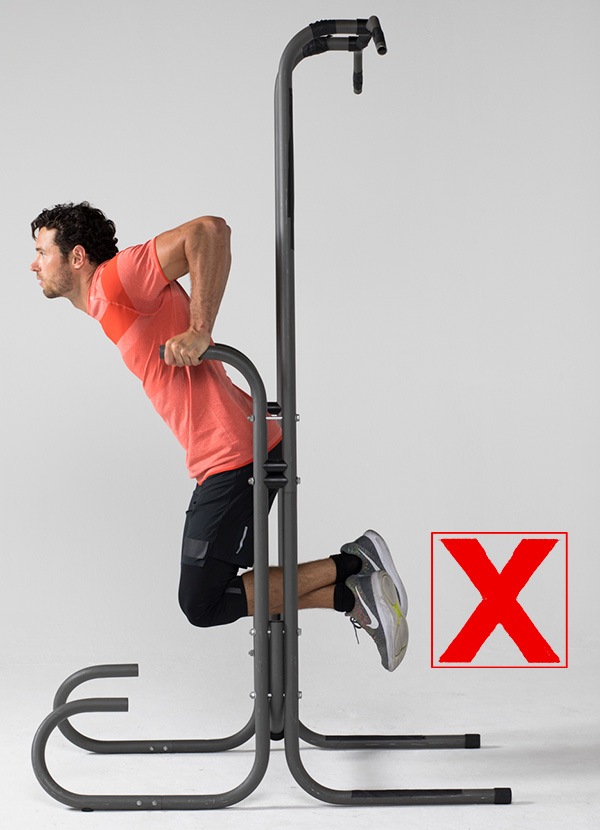 The problem: Keeping your torso vertical, flaring your elbows, not dropping low enough

The first two mistakes are very tough on your shoulders. The third one is a cheat that limits the effectiveness of the move. 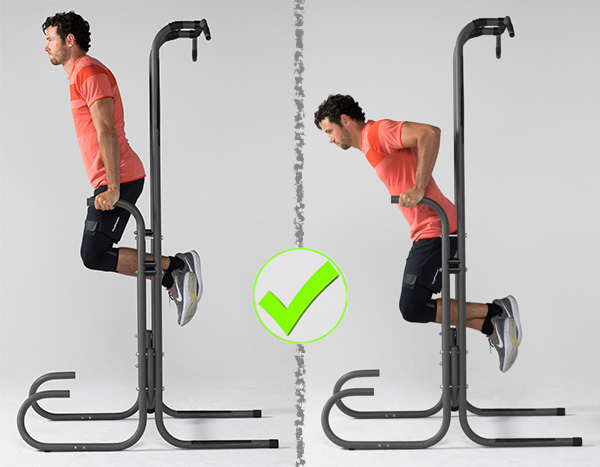 A correctly executed dip is an incredibly effective upper-body builder that nails your triceps and works your chest.

Do it wrong and you’re in for a world of hurt — not to mention looking and feeling awkward as hell.

• Grab the handles of a dip station and lift yourself so that your arms are straight. Cross your ankles behind you. This is your starting position.

• Keeping your forearms vertical and elbows tucked (not flared), allow your torso to lean forward as you lower your body until your upper arms dip just below parallel to the floor.

• Reverse the movement to return to the starting position.

Make it easier: Strap an exercise band between the bars and place a knee or two in the loop as you perform the exercise. The band will help lift you out of the low position. 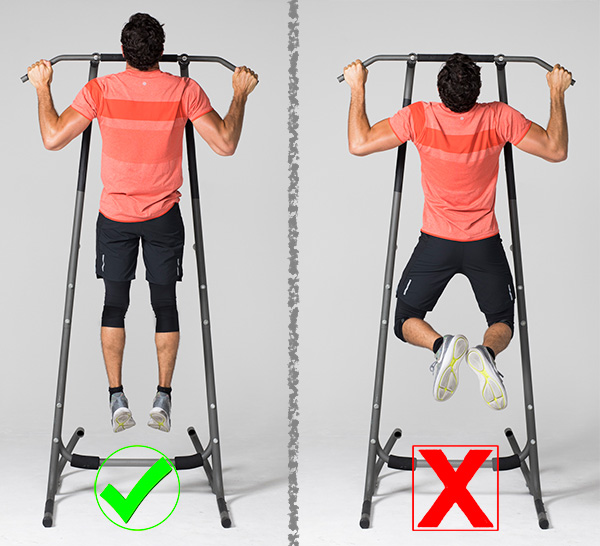 The problem: Not completing the full range of motion.

Most people fail to straighten their arms fully at the bottom of the pull-up (a position called a dead hang), and many fail to pull themselves high enough as well.

This robs you of much of the muscle-building potential of this always-effective, super-tough exercise.

How to fix it: …is pretty obvious — try to pull your upper chest to the bar (or at least your chin), and lower yourself all the way back to a dead hang during each rep.

If only it were that easy. While one of the more common exercises, the pull-up is still one of the toughest body-weight moves most gym-goers practice regularly: An informal online poll suggests the average man can perform just one pull-up; the average woman not even that. Talk about an ego check.

The key to doing multiple pull-ups, as with any other exercise, is to reduce the weight you’re using.

On the pull-up, you can accomplish that with a Chin-Up Max assistance band, which hooks onto the pull-up bar and loops around your feet. As you lower your body, the band stretches — giving you more help on the way up. 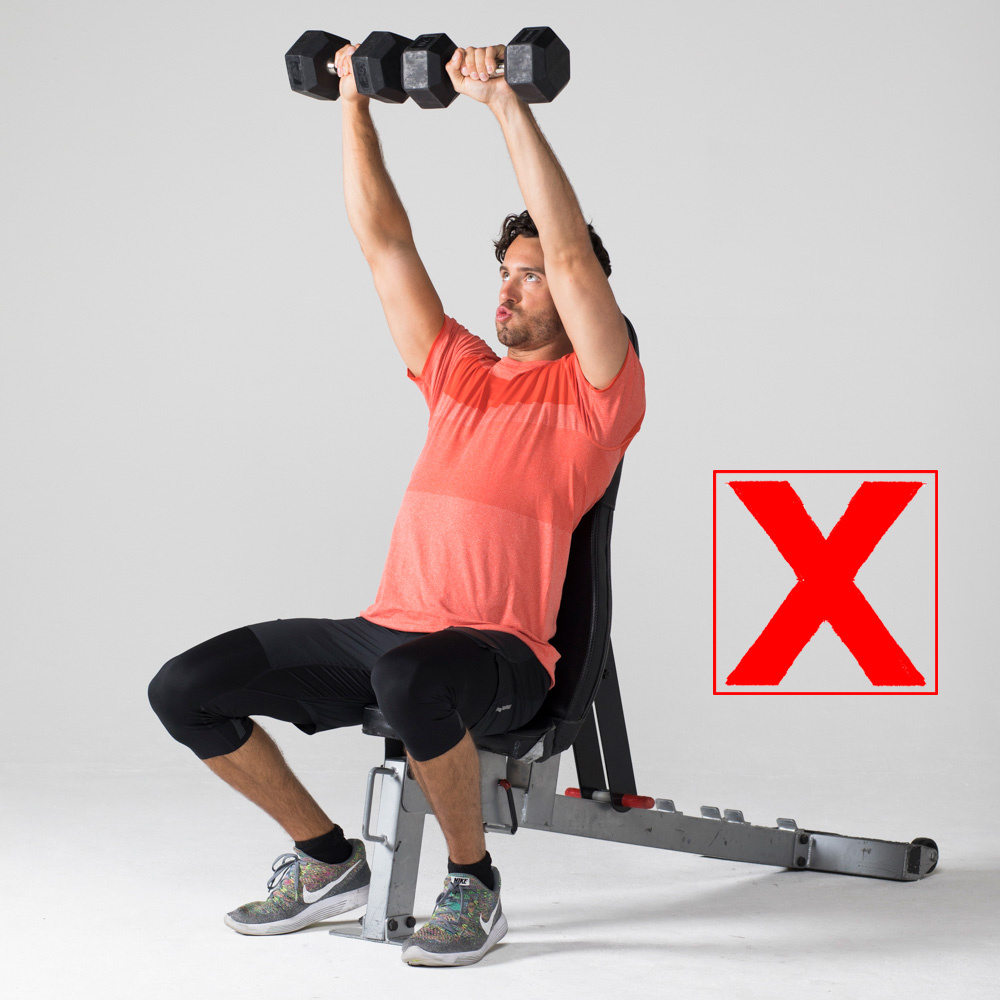 The problem: Arching your back excessively, flaring your elbows, tilting your forearms inward, poor shoulder mobility 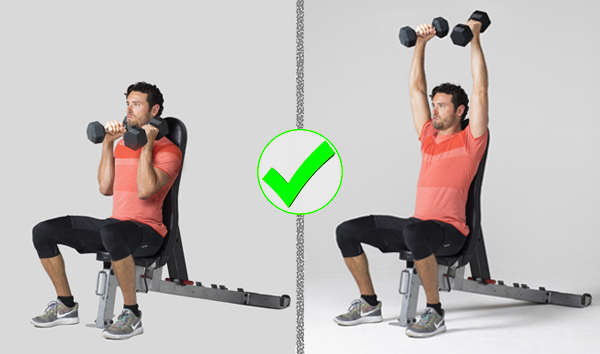 How to fix it: Leaning backward is your body’s way of pulling your chest muscles in on the pressing action and compensating for a lack of shoulder mobility.

Keep the focus on your shoulders by trying to stay bolt upright as you press.

Just as important, people often incorrectly perform the move with their palms forward and elbows flared out to the sides as if holding a barbell.

That position increases the strain on your shoulders, and thus your risk of injury. A much safer, more effective variation is to start with your elbows tucked and palms facing each other, pressing the weights directly above your shoulders.

Which brings us to another important point: If, when pressing the weights above your shoulders, you’re unable to bring your biceps beside your ears without arching your back or craning your neck, you shouldn’t perform the move at all. At least, not until you develop the shoulder mobility required to do it properly. 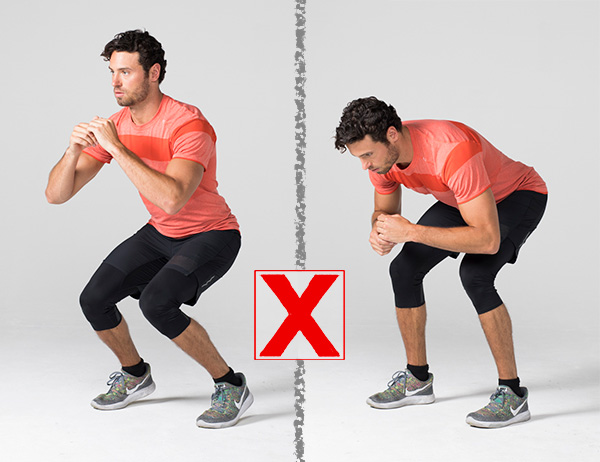 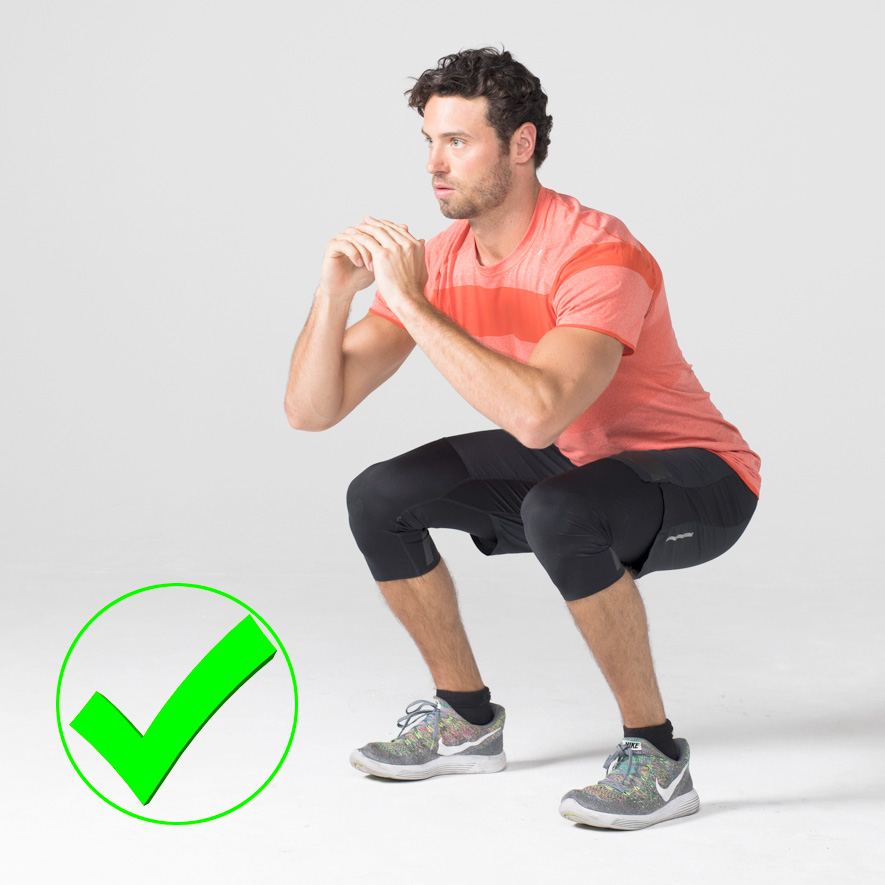 How to fix it: Toddlers squat with ease. For the rest of us, though, squatting with good form is a tall order; years of sitting — or more accurately, slouching — in front of a TV, in a car, at a desk, etc., have ruined us for this once normal and effortless movement pattern.

Furthermore, modern life rarely asks us to perform a low squat unsupported, so most people lack the core strength and hip/ankle mobility necessary to comfortably assume this position.

• Start by making yourself “tall and skinny,” standing upright with your feet hip- to shoulder-width apart. Your weight should be on your heels — evenly distributed between left and right — throughout the movement.

• Keeping your back flat, push your hips back, bend your knees, and lower your body until your thighs are at least parallel to the floor (or as low as you can get them).

Keep your head aligned with your spine (you should be looking at a spot several feet in front of you on the floor at the bottom of the move), and don’t let your knees cave inward.

• Reverse the movement to return to the starting position.

For those who have trouble dropping all the way down into a full squat due to poor ankle and/or hip mobility, withhold adding weight until you can perform the body-weight version using proper form. 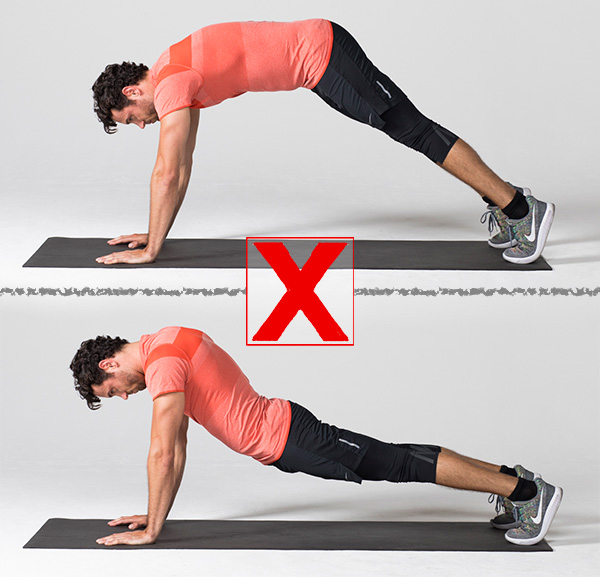 The problem: Many people raise their hips too high, or allow them to sag, increasing strain on the lower back 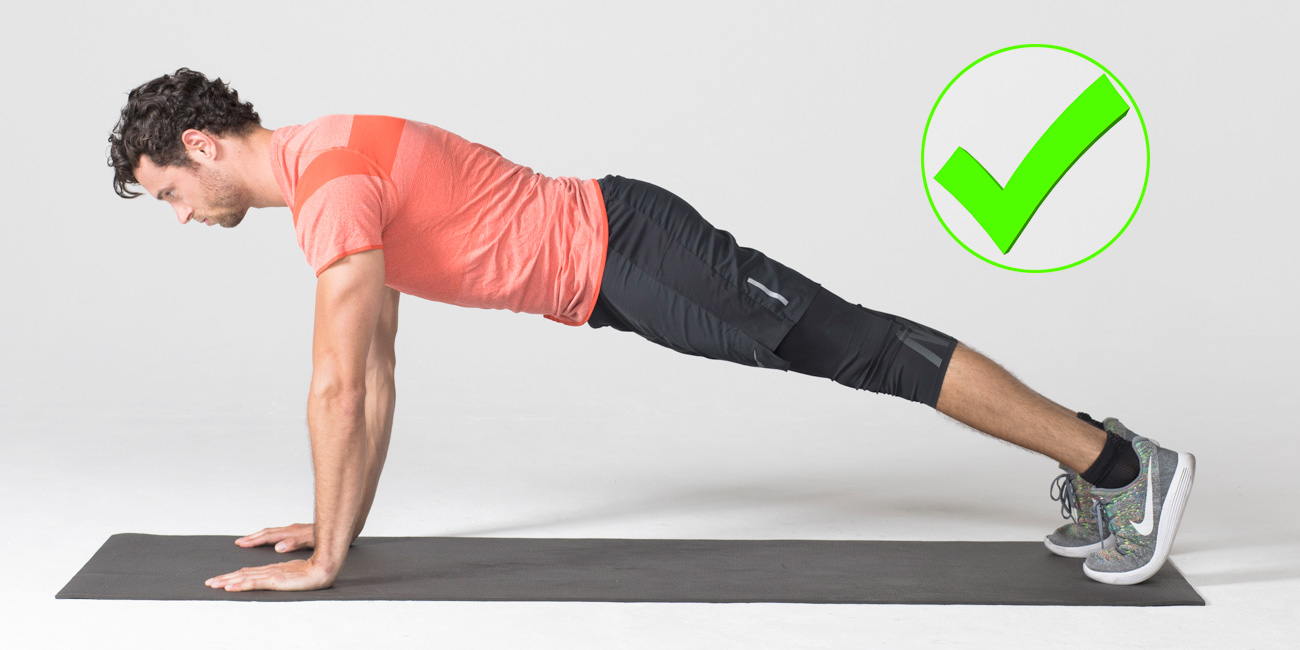 How to fix it: To feel what it’s like to nail proper form on the plank — stand with your back to a wall and your heels against the baseboard.

Your butt, upper back, and the back of your head should touch the wall.

This is the position your legs, trunk, and head should assume when you perform plank variations: a straight line from your head to your heels.

Additionally, make sure your weight is on your forearms, your elbows are directly below your shoulders, your core is braced, and your glutes are clenched. Your feet should be hip-width apart.

Having trouble finding that position when you’re horizontal? Grab a long dowel and have a training partner place it on your back. The dowel should touch your glutes, upper back, head, and heels — just like the wall does when you stand. 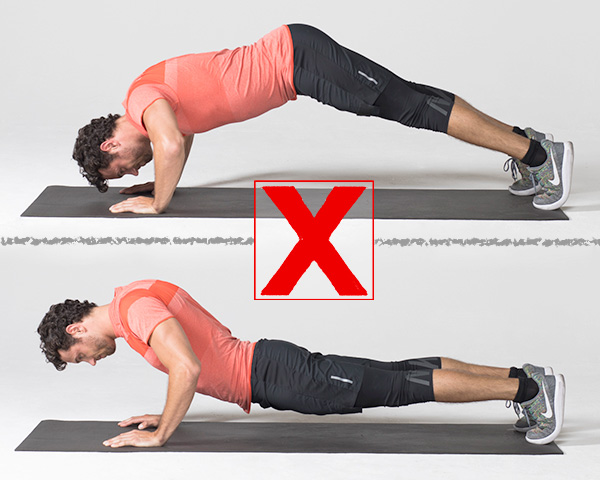 Many people press their elbows out to the side (more than 45 degrees relative to their torsos) as they lower themselves to the floor. That’s hard on your shoulders.

They also allow their hips to droop, which is hard on the lower back.

• Assume a plank position — this time with your arms straight and your hands in line with (but slightly wider than) your shoulders. Clench your glutes and brace your core to keep your body straight from head to heels.

• Keeping your head in line with your spine (look down, not forward) and elbows tucked, lower your body until your chest is within a few inches of the floor.

When you do the move properly, your head, elbows, and upper body form an arrow shape (as opposed to a “T”) when viewed from above.

• Pause, and then push yourself back up to the starting position as quickly as possible.

If you find the classic push-up too tough, perform the move with your hands on a sturdy, elevated surface (box, bench, etc.), and gradually move closer to the floor as you become stronger.

That’s a better option than knee push-ups, which don’t condition the right movement pattern or activate all of the right muscles to build the strength you’ll need to perform the standard push-up with good form.

Practice makes perfect, and there’s no better practice for the aforementioned moves than Beachbody’s library of hundreds of workouts on Beachbody On Demand.

7 Things Fit People Do at Work

Amoila Takes 6 Weeks of THE WORK on the Road