For as long as six-packs have been a thing, there’s been debate about how to best sculpt them. And while we’ll likely never know precisely what exercises the Greeks and Romans did to forge the chiseled cores immortalized in their bronze and marble statues, chances are they did some variation of the two exercises underlying the ongoing abs training debate of our times. But in the case of sit-ups vs. crunches, which are better overall?

Sit-Ups vs. Crunches: Which Are More Effective?

Viewed with an undiscerning eye, the sit-up and the crunch look pretty similar; both place you on your back with your knees bent, feet flat on the floor, and fingertips touching lightly behind your ears. But once you get past that starting position, the two exercises begin to differ, explains Beachbody Fitness and Nutrition Content Manager Trevor Thieme, C.S.C.S.

When you do the crunch, you only lift your head and shoulders off the floor, isolating your abs. “But when you do the sit-up, you raise your entire torso, requiring you to engage more muscles throughout your core, as well as your hip flexors and rectus femoris [one of the heads comprising the quadriceps],” says Thieme. “But that doesn’t necessarily make the sit-up a more effective core exercise — especially when you consider its potential impact on the spine.”

When you perform the sit-up, it’s extremely difficult to avoid rounding your lower back as you lift your torso off the ground. “Research shows that the cumulative effect of such repeated spinal flexion increases your risk of back pain,” says Thieme. The sit-up triples down on that risk by also repeatedly pushing your flexed lumbar spine into the floor and potentially overworking your hip flexors; the resulting tension can tug on your lumbar vertebrae.

People often commit the same form flaw when performing the crunch, rounding their lower backs as they contract their abs. “But it’s easier to perform the crunch without flexing your lumbar spine,” says Thieme.” Just keep it pressed into the floor. If you can do that, the exercise doesn’t increase your risk of back pain any more than the bench press, squat, push-up, or any other exercise.”

It bears mentioning in the ongoing battle of sit-ups vs. crunches that the difference in caloric burn between the two exercises is inconsequential. “You’re not going to burn many calories while performing either one,” says Thieme.

Also worth noting is that neither exercise will help you burn belly fat directly, because your body doesn’t work that way. “You can’t target fat loss like you can muscle growth,” says Thieme, adding that you can only lose overall body fat. “But as your body fat decreases, your abs will reveal themselves.”

As part of a comprehensive workout, both the sit-up and the crunch can help make that happen by contributing to an increased metabolic rate for up to 72 hours after you finish exercising. “They alone can’t shrink your belly,” says Thieme. “But they can certainly help speed overall fat loss by helping to crank up your metabolic furnace.”

Verdict: While the sit-up engages more muscles, the move can potentially place more stress and strain on your spine, making the crunch a preferable exercise — if you perform it with good form (i.e., without rounding your lower back). Otherwise, the crunch is no safer than the sit-up.

How to Make Sit-Ups and Crunches Safer

While the consequences of incorrectly doing either exercise outweigh their benefits, there are form cues and variations that can make both safe and effective.

Lock your lower back into position

To safely get as much out of the sit-up or crunch as possible, attention to form is paramount. As mentioned previously, the most common mistake people make during both exercises is rounding their lower backs. To head off that hazard, set up either move by pressing your lower back into the floor. As you rise off the floor in the sit-up, keep your core braced and your back flat to minimize the stress on your spine.

Go beyond the basic crunch

To best strengthen your entire core, Thieme recommends occasionally switching things up with crunch variations and other core exercises, such as the hollow hold, side plank with crunch, and bicycle crunch. Each will recruit a different assortment of core muscles and challenge those muscles in a slightly different way. The more comprehensive and varied your core exercises are, the stronger, more functional, and more defined your core will become.

Invented by renowned spine biomechanics researcher, Stuart McGill, Ph.D., the McGill curl-up prevents you from flexing your lumbar vertebrae. “It entails the same movement as a crunch, but by keeping one leg straight and positioning your hands underneath your lower back, you’re forced to maintain its natural arch as you curl your head and shoulders off the ground,” Thieme explains. In short, perhaps more than any other core exercise, it minimizes the stress on your spine.

How to do the McGill curl-up 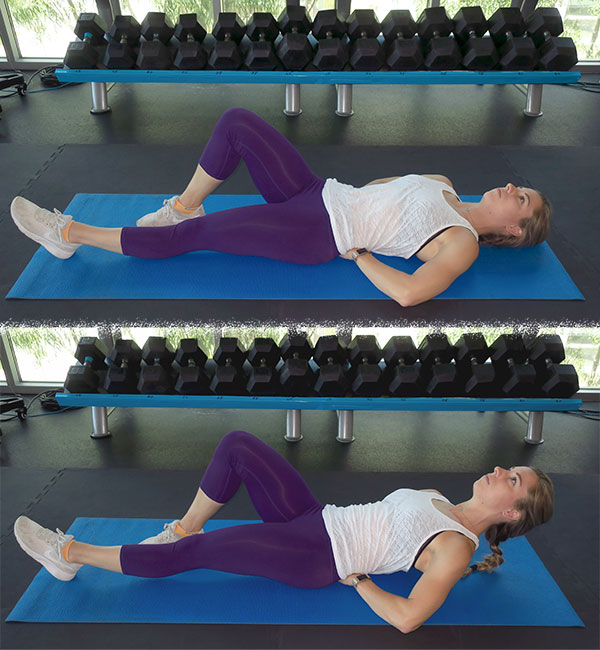