Think resistance bands are just about saving space? Or that they’re “too easy” to score you the results you want? Think again.

Whether you’re looking to add resistance training to your regimen, or want to build on the strength gains you’ve already made, exercise bands can be a valuable tool in your muscle-building repertoire.

Unlike dumbbells and barbells, exercise bands create constant tension throughout a movement.

“In so doing, they increase the time that the working muscles are under tension,” Thieme says, adding that “time under tension” is a powerful growth stimulus. “They also alter an exercise’s resistance curve.”

The point in each rep when the exercise feels hardest is the curve’s peak. In the biceps curl, that’s typically the mid-point of the movement (when the elbow is bent 90 degrees), for example.

As you bring the weights closer to your shoulders, the exercise becomes easier.

“But performing the exercise with a band changes that,” says Thieme. “Not only does the band keep your muscles under constant throughout each rep, but it also maximizes the resistance at the point in each rep when it’s typically the lowest — at the top,” says Thieme.

Another key difference between free weights and resistance bands is the direction of the resistance.

With barbells or dumbbells, you’re essentially limited to fighting the downward pull of gravity.

But with resistance bands, that resistance can come from almost any angle. As a result, bands can challenge your muscles in unaccustomed ways, hitting the refresh button on adaptation and growth.

How to Choose Exercise Bands

If you’re ready to take the plunge and create your home gym, you’ll be glad to know that resistance bands are some of the most cost-effective pieces of fitness equipment that you can buy. 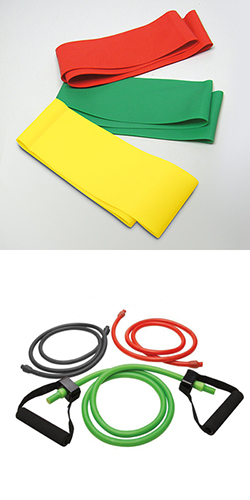 First, consider whether you want to use flat resistance bands, tubed ones, or some combination of the two types.

Thanks to a more equable distribution of pressure, they’re also less likely to leave red marks compared to tubes, making them ideal for any exercise in which the band will wrap around or press against a body part.

Some flat resistance bands come in loop form, allowing you to you wrap them around your knees when performing the clamshell, or your ankles when doing the lunge, for example.

Others come in individual strips, and are ideal for exercises such as push-ups (although these too can be turned into a hoop with a simple knot).

Because wrapping tubed bands, which are made of dense rubber compounds, around your hands would be uncomfortable, tubed bands have handles or other attachments at each end.

When performing exercises in which hand position is important (do you want an overhand, underhand, or neutral grip?), the handles are very helpful in maintaining the correct orientation.

Try them for rows, biceps curls, and chest presses.

When shopping for exercise bands, you’ll also want to weigh what levels of resistance you want — 5 to 15 pounds, 15 to 30 pounds, the options are almost endless.

(Remember, you can always make small adjustments to a band’s resistance level by positioning yourself closer to or farther from the anchor point.)

You’ll also want to think about what you’re going to use as an anchor point for your resistance band when performing moves such as rows, presses, or chops.

Do you have a pole or post around which you can loop the band? Or do you need an attachment kit to secure the band to a door?

Once you’ve got the right resistance bands, it’s time to put them to use with these exercises straight from Beachbody On Demand programs.

• Lay a resistance band on the floor, stepping your feet onto its center hip-width apart (you can loop the band around each foot if you need less slack). Hold the left handle in your right hand and the right handle in your left hand so that that the band forms an “X.”

• Keeping your back flat, core braced, and arms extended toward the floor, push your hips back and hinge forward, bending your knees slightly as you lower your torso until it’s almost parallel to the floor. This is the starting position.

• Row the handles to the sides of your ribs, squeezing your shoulder blades together at the top of the movement.

• Pause, and then lower the handles back to the starting position.

• Anchor a resistance band at chest height. With your back to the anchor point, hold the handles at shoulder height with your palms facing forward, and walk forward until you feel tension in the band. Step your right foot back into a staggered stance. This is the starting position.

• Keeping your core braced, extend your arms up in front of you at a 45-degree angle.

• Pause, and then slowly reverse the movement to return to the starting position. Do all of your reps, and then switch to a decline press.

• Bring the handles to the sides of your torso, and flip your hands so that your palms are facing up.

• Keeping your back flat and core braced, press the handles forward, so that your arms are angled toward the floor when fully extended.

• Pause, and then slowly reverse the movement to return to the starting position.

Benefits: In addition to helping strengthen your shoulders, this exercise will also work your triceps and emphasize core stability.

• Lay a resistance band on the floor, stepping onto its center with your right foot, keeping your left foot behind you in a staggered stance. Grab the handles and bring them to shoulder height, palms forward, with the band running along the backs of your arms.

• Keeping your torso erect and your core braced, press the handle in your right hand directly above your shoulder until your right arm is fully extended.

• Lower it, and repeat with the handle in your left hand. Continue alternating sides.

Benefits: Show the sides of your shoulders some extra love with this creative move, which includes a glute kickback to help build your backside and boost balance.

• Lay a resistance band on the floor and step onto it with your left foot slightly left of center.

• Grab a handle in each hand. Bring the right one to your right hip and raise the left one to hip level in front of you with your arm straight.

• Shift your weight onto your left leg and touch the floor with the toes of your right foot behind you. This is the starting position.

• Keeping your back flat, abs engaged, and your left arm and right leg straight, simultaneously raise the left handle to shoulder height in front of you and lift your right foot off the ground behind you.

• Reverse the move to return to the starting position.

Benefits: If regular bird dogs are no longer challenging enough, take your core and glute work to the next level with the addition of a resistance band.

• Lay a resistance band on the floor, and step your feet hip-width apart onto its center. Loop the right end of the band around your right arch and repeat with the left.

• Grab the handles, and get on all fours, with your hands directly under your shoulders, and your knees under your hips. The band should run along the outsides of your legs.

• Keeping your back flat and core braced, extend your right arm in front of you and your left leg behind you.

• Slowly reverse the move to return to the starting position, and repeat for reps.

• Do all of your reps, switch sides, and repeat.

Benefits: With this variation, you’ll maintain constant tension in your biceps for the entire set, increasing your burn and muscle-building potential.

• Lay a resistance band on the floor and assume a staggered stance with your right foot on the center of the band. Grab a handle in each hand, and raise them in front of you with your elbows at your sides until there is tension in the band. This is the starting position.

• Keeping your elbows tucked, curl the handles toward your shoulders as far as you can.

• Pause, and then return to the starting position. Switch legs halfway through each set.

• Secure a resistance band on the top of a door or anchor point of comparable height.

• Grab the handles, kneel on one knee, and straighten the other leg in front of you.

• Pull the handles to your shoulders, so that your palms face back and your elbows are by your sides. This is the starting position.

• Keeping your elbows tucked, your back flat, and your chest up, extend your arms fully, pulling the handles toward the floor. Pause, and then return to the starting position.

• Switch legs halfway through each set.

Benefits: This Pilates-inspired core move rolls the advantages of a plank, a sit-up, a superman, and more all into one.

• Sit on the floor with your knees bent, feet together. Place the resistance band over the tops of your feet, and then loop it around each arch, pulling the handles up between your legs.

• Bring the handles to the center of your chest (knuckles touching), lift your legs off the ground (shins parallel to the floor), and balance on your sit bones. This is the starting position.

• Keeping your back flat, abs engaged, and heels off the floor, extend your legs straight in front of you as you lower your torso to the floor.

• Extend your arms out to your sides and then sweep them toward your knees before pulling the handles back to your chest as you raise your legs and torso to return to the starting position.

High on the list of questions people ask about Beachbody exercise bands is their equivalent dumbbell weights.

While a lot hinges on how you use them — the shorter you make the band, the greater resistance — there are general weight thresholds associated with each color. 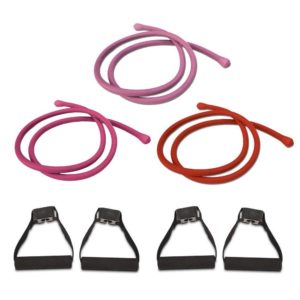 Using approximately three feet of band (or stepping onto the center of it), the following resistance bands are the equivalent of using the corresponding weight of dumbbell.