If you do all of your squats with both feet on the ground, you might be missing out. Trainers and exercise scientists have long touted the importance of unilateral exercises, or “one sided” movements that work limbs independently. And the pistol squat is a perfect example.

While the right and left sides of our bodies might appear to be symmetrical and balanced, they’re rarely equal in strength, power, and mobility. Indeed, your dominant side often compensates for your non-dominant one without you even being aware of it. As a result, muscles on your dominant side become slightly stronger, leading to an imbalance that increases your risk of injury.

Being a unilateral exercise, the pistol squat isolates the muscles in each leg, specifically the quads and glutes, forcing them to work without the help of their counterparts on the opposite side. This variation of the single-leg squat may feel awkward at first (cue the wobbly Bambi legs), but over time, the pistol squat may help even out muscle imbalances. And that’s just one of the move’s many benefits (more on those later).

How to Do the Pistol Squat With Perfect Form 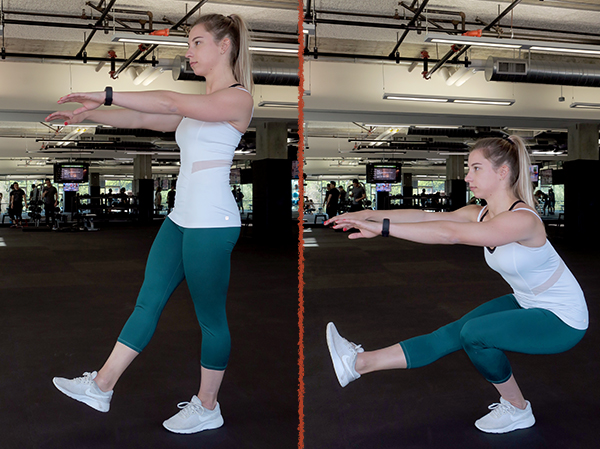 How to Make the Pistol Squat Easier

One-legged squat progressions like the pistol are challenging for even the most advanced athletes, so don’t be afraid to scale the movement as needed. “Never sacrifice form in order to complete a rep. If you can’t do at least five full reps, modify it,” says Trevor Thieme, C.S.C.S., senior fitness and nutrition content manager for Beachbody.

You can make it easier by squatting onto a bench, box, or chair. Another option is to hold onto a wall, railing, pole, or other stable support for balance and leverage. As with any squat variation, you can also reduce the difficulty by limiting the depth of your squat.

How to Make the Pistol Squat Harder

Looking to really challenge yourself (or maybe just show off a little)? If an unsupported pistol squat still isn’t hard enough, add weight by holding a dumbbell out in front of you. You can also escalate the overall difficulty of this single-leg squat by slowing down the movement; count to three as you lower your body, and then pause for one second at the bottom before standing back up. Of course, you can also combine both progressions into the same move. The key is to find the pistol squat progression that works for you. We’re particularly fond of the following one.

How to Do a Dumbbell Pistol Box Squat

Appears in: The Master’s Hammer and Chisel >> Chisel Balance (as the “Leg Squat Sit”)

Bonus Tips for the Pistol Squat

To get the most out of any single-leg squat,Thieme recommends focusing on ankle mobility. “It won’t matter if you’re strong enough to perform the exercise if your ankles lack the range of motion necessary to allow you to execute it with good form,” he says. Performed regularly, ankle exercises can help improve ankle stability and mobility.

Benefits of the Pistol Squat

Reaping the benefits of the classic pistol squat is a bit of a catch-22. Performing even a single rep with perfect form requires not only a high degree of strength, power, balance, stability, and coordination, but also solid hip, knee, and ankle mobility, Thieme explains. “But it also helps you develop those same skills,” he says.

In short, if you’ve already built a solid fitness foundation, the classic pistol squat can help you make it even stronger — but you need that foundation. “So don’t hesitate to modify,” says Thieme. “If you can’t perform at least five unassisted reps of the classic move with perfect form, regress the exercise [using the modifications above] until you can.”

What Muscles Does the Pistol Squat Work?

Your quads are comprised of four muscles on the front of your femur (thighbone) that are responsible for straightening your knee. They consist of the rectus femoris, the vastus lateralis, the vastus medialis, and the vastus intermedius. Along with your glutes, they assume the majority of the workload during the pistol squat.

There are three primary muscles that form your butt. The one you’re most likely familiar with is the gluteus maximus, which is one of the body’s largest muscles, and is chiefly responsible for extension of your hip, as well as your butt’s overall shape. The gluteus medius is located toward the outer edge of your rear, and mostly handles abduction (raising to the side) and rotation of your leg. Finally, the gluteus minimus, buried beneath its bigger brothers, performs a supporting role in pelvic stabilization and leg rotation.

Your core includes all of the muscles in your lower torso, as well as your glutes and trapezius. You’re likely familiar with the rectus abdominis (i.e., abs), which is a single muscle (not six) that spans from the bottom of your ribs to the top of your pelvis. It’s primary task is flexing the lumbar spine, which is what you do when you perform a crunch.

Buried under the rectus is the transverse abdominis, which helps stabilize the spine and pelvis during movement. And framing the anterior muscles of your core are your obliques, which control rotation of the torso and lateral (side-to-side) flexion of the spine.

Seldom regarded among the marquee muscles forming your your core are the spinal erectors of your back, which provide crucial stability for your spine during movements like the pistol squat. Other muscles include the multifidus, latissimus dorsi, glutes, traps, and diaphragm.

How to Sculpt an Hourglass Figure