If you want big, strong, tough quads, then you need to introduce them to stimuli beyond what they’re already used to. That means adding tough quad exercises to your leg workouts.

“When training for strength or mass on your thighs, it’s important to stick to complex movements like squats or lunges, which allow you to lift heavier,” says Beachbody fitness expert Cody Braun.

Formed by four large muscles on the fronts of your thighs, the quadriceps straighten your knees (such as when you stand up from a seated position), and prevent them from buckling (such as when you land after striding, stepping, or jumping).

Over the course of an average day, your quads might help you scale several flights of stairs, carry you across miles of city blocks, and push you up from a chair dozens of times. Throw exercise into the equation, and they become even more central; squatting, lunging, running, jumping, and virtually every form of locomotion all require tremendous strength, power, and endurance in the quads.

“Since the quads are a large muscle group that can exhaust quickly, you can expect Bambi legs after a tough leg day,” says Braun. While we can’t make quad training easy, we can help make it effective.

9 of the Best Quad Exercises

Below are some of the most quad-searing moves available in Beachbody On Demand‘s rapidly growing library of muscle-building, fat-burning, professionally-designed workout programs. Some of these quad exercises require basic equipment such as a bench or a pair of dumbbells, but many require nothing more than your body weight, a few square feet of space, and a megaton of mental toughness.

Pick two or three moves from the list below any time you want a kick in the quads, or as a supplement to any Beachbody On Demand program you’re currently doing.

What it does: Works the quads in conjunction with the hamstrings and glutes.

What it does: Strengthens the quads in a lengthened position.

Front to back lunge

What it does: Builds unilateral strength and size in the quads, glutes, and hamstrings, while challenging full-body balance.

What it does: Strengthens and builds the quads, glutes, and hamstrings.

• Assume a “prisoner squat” position: hands behind your head, elbows wide, knees and hips bent into a half squat. This is your starting position.

• Keeping your back flat and your core engaged, step backward with your right foot and place your right knee on the floor.

• Follow with your left knee and assume a kneeling position.

• Step forward with your right foot, then your left foot, and return to the starting position — that’s one rep.

• Repeat the entire sequence, starting this time with your left foot and continuing to alternate your lead leg on each rep.

What it does: Improves explosive power in the quads, glutes, and hamstrings; challenges coordination and athleticism.

• Stand with your feet shoulder-width apart, and drop as low as you can into a squat position: legs bent, hips back, chest up, back flat, gaze forward.

• Explode upward, jumping off the floor and rotating 180 degrees in midair to your right.

• Repeat the movement, this time rotating 180 degrees to your left.

What it does: Works the quads while activating and strengthening the glutes, building core stability.

• Assume an all-fours position on your palms and the balls of your feet. Your back should be flat, your hands below your shoulders, and your knees bent 90 degrees below your hips a couple of inches above the floor.

• Keeping your toes pointed toward the floor, extend your right leg directly behind you until it’s straight and parallel with the floor.

• Return to the starting position and repeat with your left leg.

• Continue alternating sides for 1 minute, keeping your knees off the floor for the duration of the set.

What it does: Emphasizes the lowest, most challenging portion of the squat exercise, building strength and endurance in the quads, glutes, and hamstrings.

• From a wide stance, drop into a deep squat position: knees bent, chest up, back flat, hips low, gaze forward. Press your palms against one another at your chest in prayer position.

• Keeping your back straight and your chest lifted, rise two inches from the squat position.

• Reverse the move and repeat, performing mini-pulses in and out of the deep squat position for 30 seconds.

What it does: Works the quads (along with the glutes and hamstrings) through a compete range of motion, while also providing a dynamic stretch in the hip flexors and quads of your back leg.

• Stand facing away from a box or bench holding a pair of light- to medium-weight dumbbells at your sides, and place the toes of your left foot on the bench behind you.

• Keeping your torso upright and your gaze forward, lower your body until your right thigh is parallel with the floor (your left knee should not touch it).

• Reverse the move, and repeat for reps, then switch sides. Perform an equal number of reps on each.

What it does: Builds explosive power in the quads, glutes, hamstrings, and calves; improves full-body coordination and athleticism.

• From a hip-width stance, jump and rotate 90 degrees in midair to your right, landing in a lunge: right foot in front of your left, right thigh parallel with the floor, both knees bent 90 degrees. Your left arm should swing in front of you, your right arm behind you.

• Explode out of the lunge position, jumping 90 degrees back to your left into a forward-facing shoulder-width stance.

• Immediately jump a few inches off the floor, landing in a wide stance, and drop into a squat with your hips back, chest up, back flat, and palms together at shoulder level.

• Explode out of the squat position, jumping back to a shoulder-width stance.

• Immediately, jump again, rotating 90 degrees in midair to your left, and landing in a lunge, this time with your left foot forward.

• Continue cycling through the entire sequence for 30 seconds, performing an equal number of lunges on both sides.

The Muscles of the Quads

The quads are four distinct muscles on the front of your thighbone (femur): the rectus femoris, the vastus lateralis, the vastus medialis, and the vastus intermedius. 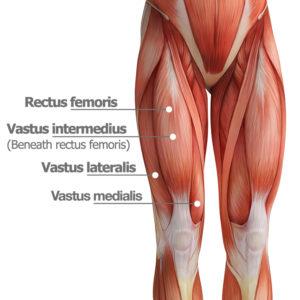 • The rectus femoris originates at two points on the pelvis, runs down the front of the femur, and attaches to the kneecap (patella). Unlike your other quad muscles, it crosses two joints — the hip and the knee — and you’ll feel it working (and possibly cramping) when you lift your leg straight up in front of you.

• The vastus lateralis is the meaty muscle on the outside of your thigh, the one that sweeps outward on a beefed-up bodybuilder’s upper leg. It originates at the top, outer portion of your thigh, and attaches to the kneecap and tibia.

• The vastus medialis is the teardrop-shaped muscle visible just above and to the inside of the knee. It runs along the inside of your femur, and is particularly active as your legs lock out.

• Finally, the vastus intermedius is the George Harrison of the group, quietly doing its job while obscured beneath and between bigger, flashier players. It runs along the center of your femur, underneath the rectus femoris.

The rewards of quad training are many: strong legs don’t just help you run fast, jump high and look great, they’re also a key factor in aging, and even cognitive aging.

While you’re hammering your way to becoming Quadzilla, however, remember that the best quad workout in the world is only as good as your ability to recover from it. So after you crush it in the gym with a serious quad workout, be sure to supply your body with the macro- and micro-nutrients it needs to rebuild and repair the muscle tissue you broke down during your uber-tough quad workout.