Skip to content
October 11, 2017 | BY: Rachael Schultz and Kristy Alpert

Crush your daily INSANITY or P90X workout, and the pounds will melt off. But that doesn’t mean gentler workouts, such as yoga, can’t help you lose pounds, too. The Beachbody 5-Day Yoga Body Challenge is an intermediate-level yoga series that can help improve flexibility, balance, and strength, as well as get your heart pumping to torch calories.

While there are some styles of yoga that can help one burn more than 500 calories per hour — such as Vinyasa (see below) — overall, yoga doesn’t top the list of calorie-torching weight-loss workouts one can do to see relatively quick results. But research shows that practicing yoga may work for weight loss when combined with a healthy diet. And the more often you practice yoga, the greater the results you’re likely to see on the scale.

In a massive study of more than 15,000 adults, those who had been practicing yoga for at least four years clocked in at a lower weight than those who went without a regular session. But you don’t have to have do yoga for years to see results. A small study from South Korean researchers found obese women who practiced yoga for 16 weeks saw significant improvements in body weight, body fat percentage, BMI, waist circumference, and visceral fat compared to those who didn’t exercise. In addition, one study published in the Journal of Alternative and Complementary Medicine showed that a short-term yoga program could reduce weight in overweight and obese men.

So how can yoga help you lose weight? Read on.

What Type of Yoga is Best for Weight Loss? 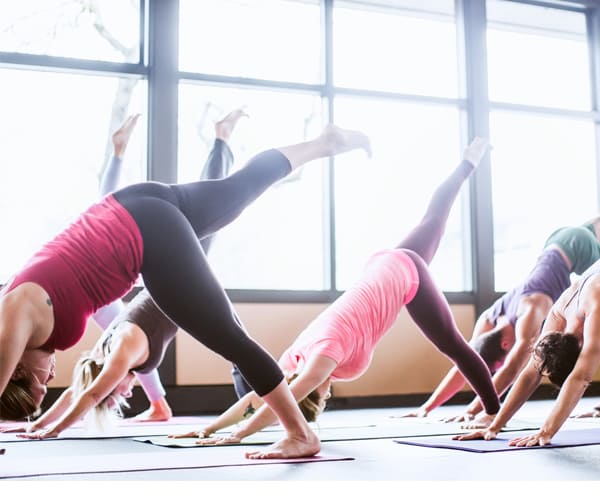 “If you’re looking to burn the most calories, you want to find a class that incorporates a lot of strength positions and sun salutations, particularly chaturanga dandasanas [essentially, yoga push-ups],” says yoga instructor Seth Kaufmann, C.S.C.S., co-owner of Iron Lion Fitness Studio in Florida. “In order to burn calories efficiently, you need to be moving and using the most amount of mass and muscles.”

You’ve probably heard about people sweating like crazy in heated yoga classes like Bikram, which has to translate to a ton of weight lost — right? Kaufmann says, “In theory a hot yoga class would burn more calories than a non-heated room because anytime the external temperature is extreme (hot or cold), your body has to work harder to maintain your core temperature homeostasis, thus burning calories.”

However, a small study from the University of Wisconsin-La Crosse found that yoga students in a non-heated yoga class showed the same increase in core temperature and heart rate than in a hot yoga class. Researchers found that the students’ perceived effort was higher than what their vital signs revealed, leading scientists to wonder whether students didn’t end up pushing themselves as hard during some poses to compensate for the added heat and humidity in the room.

Another study from the Journal of Bodywork and Movement Therapies found 30 minutes of just sun salutations is invigorating enough to qualify as cardiorespiratory training, and helps a 130-pound person burn an average of 230 calories. These studies point to the idea that your final caloric burn is tied more closely to how hard you’re working than how hot the room is.

As mentioned previously, the style of yoga you perform can play a significant role in the amount of calories you burn. But other factors such as your weight, gender, body composition, and effort level are also important. What follows are averages based on the Health Status calories burned calculator.

A 165-pound woman will burn the resulting number of calories during an hour of yoga:

A 190-pound man will burn the resulting number of calories during an hour of yoga:

OK, so should you do the most intense yoga possible if you want to lose weight? Not so fast. Even super mellow methods have their weight-loss perks. A small study at the University of California, San Diego, found that overweight women who practiced restorative yoga, which focuses less on increased heart rate and more on relaxation and stress reduction, lost around three pounds and about five inches of subcutaneous fat after six months.

This may surprise you, but it makes sense to the experts. “If you’re super stressed, your body may actually respond better to yoga than [high intensity] cardio,” says Pete McCall, C.S.C.S., personal trainer and adjunct faculty of exercise science at San Diego Mesa College.

Physical stress (as triggered by high intensity exercise) and psychological stress (caused by work, family, etc.) both activate the sympathetic nervous system, which controls the “fight or flight” response. When you go into “fight or flight” mode, your body increases its production of the hormone cortisol. In the short term, that’s a good thing; cortisol is a performance enhancer, increasing the concentration of glucose (your body’s primary fuel source) in the blood. But if levels never return to normal (e.g., because of chronic stress), cortisol can also promote weight gain. That’s why doing high intensity workouts might hamper weight-loss efforts if you’re already (and chronically) “super stressed” — you’re layering stress on top of stress, and cortisol on top of cortisol.

To counteract that, you need to activate your parasympathetic (“rest and digest”) nervous system. “By going to a gentle yoga class during a stressful time, you’ll be surprised that you’ll come out of it calmer — and actually lose weight,” says

Kaufmann agrees, “There are many physiological benefits to yoga, including stabilizing our nervous systems, improving respiratory efficiency, stomach function, hormone production, and, of course, increased strength and energy levels. These benefits in turn lower stress, improve sleep, and help the body recover and run more efficiently.”

Plus, more than half of people who do yoga report that it helps them sleep better, according to a survey from the National Center for Complementary and Integrative Health. Scoring less than five hours a night is directly related to more abdominal fat and an increase in body mass index, according to a study performed over five years on adults younger than 40 and published in the journal SLEEP. It’s hard to deny the importance of sleep — not just for your quality of life but also for weight loss.

How the Psychological Benefits of Yoga Can Aid Weight Loss

“The greatest benefit of yoga for weight loss is learning how to love and care for yourself more, which helps you make better lifestyle decisions when it comes to caring for your body,” says Kaufmann.

And the research agrees: A study in Qualitative Health Research found that practicing yoga helped people develop physical self-empowerment, and better awareness of the self and the present moment. The women who participated in the 12-week yoga treatment program for binge eating (in the study mentioned above) reported an overall reduction in the quantity of food consumed, decreased eating speed, and an improvement in food choices.

“The core essence of yoga is to teach us to live fully present in the moment, accepting what is, and letting go of anything that doesn’t serve us,” says Kaufmann. “When we can live our lives with more mindfulness we will make better decisions when it comes to what we do for our health.”

To most Westerners, yoga is more often associated with trendy fitness studios. But the practice originally began as a philosophy in India roughly 5,000 years ago, and incorporates so much more than merely the postures and poses it’s famous for today.

The true practice of yoga encompasses eight limbs: the yamas (restraints), niyamas (observances), asanas (postures), pranayama (breathing), pratyahara (withdrawal of senses), dharana (concentration), dhyani (meditation), and samadhi (absorption). It’s the combination of all eight of those limbs (not just the one that stretches the limbs) that can lead to weight loss for men and women.

“There are many studies that suggest that stress and the hyper-palatable food supply filled with refined carbohydrates create an internal biochemistry that activates the amygdala of the brain and make us less thoughtful choice-makers,” explains Annie B. Kay, RDN, E-RYT 500 registered yoga instructor, and lead nutritionist at Kripalu Center for Yoga & Health. “Yoga helps reduce stress as well as provides movement, which helps change that internal biochemistry to one that supports a more balanced brain activation (the cerebral cortex or executive function), which makes us better choice makers.

“From my experience, the primary way yoga helps with weight management is through stress management, and with its philosophy of compassion and cultivation of contentment,” continues Kay. “With yoga, there is an entire philosophical guide for living in balance with yourself and with others that can be helpful from an emotional standpoint. It provides a framework through which to look at life issues.”

Yoga is a path toward a deep self-discovery, and the practice not only helps unearth the difference between physical and emotional hunger for those who practice, but it also stretches the mind and body in new ways to open students up for more active lifestyles. Because yoga operates on so many levels (physical, mental, emotional), it has a way of making following an overall healthful lifestyle more easily attainable.

If you’d like to give yoga a try, check out the 5-Day Yoga Body Challenge to burn calories while you stretch, or try 3 Week Yoga Retreat to learn the fundamentals of yoga.