There are some people who believe running for weight loss is an ineffective way to shed pounds; Sue Reynolds isn’t one of them.

Granted, taking up running was not the only lifestyle change she made. It’s unlikely that anyone can just run to lose weight. Reynolds also cleaned up her diet and mixed in other types of exercise, eventually becoming a world championships-qualifying triathlete.

But it was likely more intense running, such as interval training (rather than simply jogging), that played a larger role in her transformation.

“I have no way of determining a number with regard to the degree to which running impacted my weight loss,” she confesses. “However, I can say that I believe running was a significant factor.”

(Pro tip: Need more ideas on how to lose weight and get fit? Download our free “100 Ways to Lose Weight” guide here!) 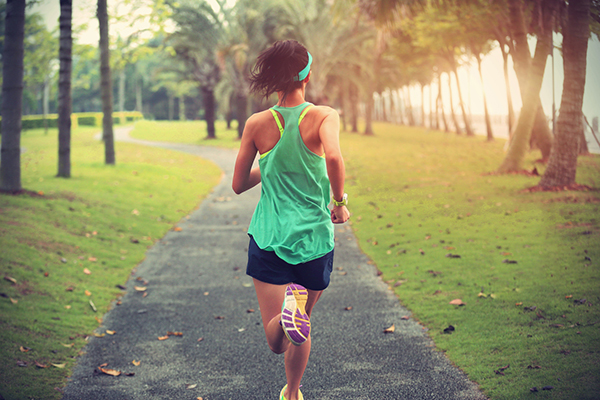 Running for Weight Loss: How It Works

Reynolds’s experience is hardly unique. Indeed, research suggests that running can have a decidedly positive impact on weight control — if you take the right approach to it.

In a 2012 study, for example, Paul Williams of Lawrence Berkeley National Laboratory analyzed data from a population of more than 33,000 male and female runners to compare the effects of running and non-running exercise (such as walking, cycling, and swimming) on body mass index (BMI) and waist circumference.

Williams speculated these findings might have to do with the fact that runners tend to measure workouts in terms of distance, rather than time. A person burns more or less the same number of calories per mile that he or she runs, but energy expenditure per unit of time is highly dependent on intensity, which is often overestimated.

Another possibility, also supported by research published in the Journal of Obesity, is that running has favorable effects on appetite, helping to reduce how much you eat after exercising.

How Much Weight Can You Lose by Running?

This question is surprisingly difficult to answer. Calculating calories burned through running is the “easy” part. The following recommendations from the American Council on Exercise give you the approximate caloric cost of running per minute:

To calculate approximately how many calories you may burn by running, simply multiply the value listed above by your body weight in kg (1kg = 2.2 pounds), then multiply that answer by the duration you spent running for your total score.

The trouble comes when you try to convert calories burned into pounds lost. You have probably read or heard that for every 3,500 calories you burn in excess of what you eat, you’ll lose one pound — but study after study show that this theory may be inaccurate.

The more weight you lose, the fewer calories your body burns at rest, so you have to cut your food intake or increase your activity level even more in order to maintain the same rate of weight loss.

Research acknowledges that the body reacts to forced weight change due to caloric restriction by adapting total energy expenditure.

It’s difficult to predict how each person may be affected by this process since it’s highly individual. It’s virtually impossible, therefore, to predict how much weight you will lose by running.

What you can do instead is set a weight-loss goal, start a combined running and strength-training program complemented by diet changes, ideally, and see where it takes you.

The Portion Fix Eating Plan can provide the framework for a nutrient-rich diet constructed around roughly 40 percent carbs, 30 percent protein, and 30 percent fat — a balance that’s great for weight loss.

Our running for weight loss plan varies intensity by challenging you to run at different paces and on various terrain (hills). Combine it with our suggested strength-training workouts offered on Beachbody On Demand, and you’ll build lean muscle mass while burning excess body fat.

How to Start a Weight-Loss Running Plan

In addition to being an effective way to lose weight (when you use the right approach), running is simple and convenient — something you can do almost anywhere with minimal gear.

The one big drawback of running for weight loss, or just running in general: It’s a high-impact activity that’s hard on the joints of the lower extremities.

While running can increase bone density in the legs — it increases the load on them, and forces your legs to adapt quickly to the new stress — it can also carry a high risk of injury, particularly to the lower extremities, especially for beginners who are unaccustomed to the high-impact, repetitive nature of the movement.

Fortunately, by taking certain precautions, you can greatly increase your chances of staying healthy. One helpful measure is to start with small amounts of running, and separate runs by 48 hours to give the tissues of your lower extremities an opportunity to adapt to the repetitive impact before you run more.

Don’t worry: A little running can produce a lot of fat loss if you keep the intensity high and combine it with strength training and a healthy, portion-controlled diet. 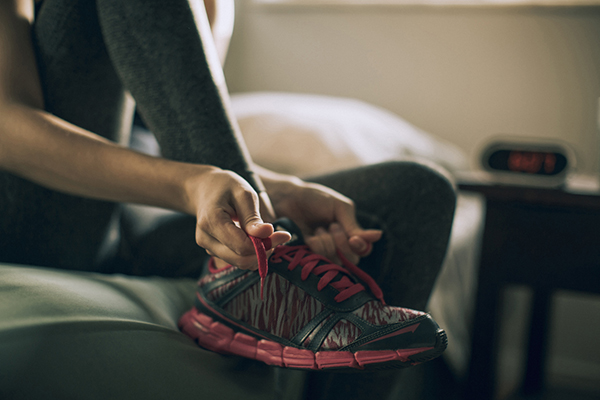 Find the Right Running Shoe for You

Choosing the right shoes will further reduce the likelihood of getting hurt. Always run in shoes designed specifically for the activity, rather than general cross-trainers or all-purpose sneakers. But not all running shoes are good for every runner; some runners need more cushioning, others less. Some do better with shoes that have special stability features, others not so much.

To find the best shoe for you, do your shopping at a running specialty store with staff trained in matching runners with the most appropriate footwear. But don’t put yourself entirely in the experts’ hands. Research suggests that runners are less likely to get injured when they choose the most comfortable shoes from a range of options — so listen to your feet as well as to the salesperson assisting you.

Besides trying to stay injury-free, new runners should focus on staying motivated. Consider signing up for an event, such as a 5K fun run. Many beginners find the goal of crossing a finish line drives them to keep running in a way that a weight-loss target does not because it gives them a specific goal to work toward, and a deadline to reach that goal.

Also, the experience of crossing a finish line can get one hooked on running more powerfully than hitting a weight-loss target. Just ask Sue Reynolds: “I never intended to become an athlete,” she says. But her first 5K led to another, which led to her first short triathlon, and so on.

Ironically, the majority of Reynolds’s weight loss came after she shifted her focus from weight loss to event goals, a common phenomenon.

So, be forewarned: Although you may initially look at running as nothing more than a way to shed a few pounds, you just might fall in love with it.

Ready to get started running to lose weight? Check out our 8-Week Running for Weight Loss Program.

What Is the CICO Diet and Can It Help You Lose Weight?

Why You Should Practice Pilates for Weight Loss