“Hey, don’t cry,” said the ER nurse, approaching my hospital bed. “We got that arm back in.”

Yes we did. It took two doctors, the nurse, me, the threat of being put under general anesthetic, and two giant IV bags of pain meds to do it. And it still hurt like hell. But that’s not why I was crying.

My injury was a season ender.

I had been doing a simple shoulder stretch at home — something I had done countless times before — when my shoulder dislocated suddenly. The sound was sickening. The pain was immediate. And after trying (and failing) to get my shoulder back into its socket on my own, I headed to the ER. Again.

It was the first time I had dislocated my shoulder while stretching, but it was the third time in as many years that it had popped out of its socket and refused to go back in, landing me in the ER. And as the doctor explained, strike three meant surgery.

That was in August 2016. I had surgery less than 2 months later, becoming yet another pro athlete with a career-pausing injury.

It is a universally acknowledged truth that injuries suck, and for an athlete, the pain isn’t even the worst part. If you live to compete, the most excruciating aspect of becoming injured is being unable to do what you love (training and racing). Most of us experience that disappointment at some point. Injuries are frustratingly common in endurance sports. We push our bodies to their limits, asking them to cover hundreds of miles each week across multiple athletic disciplines. It’s hardly surprising that they sometimes break and fail.

Until it happens to you. Then it’s definitely surprising and more than a little heartbreaking. If you’re lucky, and your injury is relatively minor, you can heal it yourself in a few days or weeks with a bit of smart self-care and rehab. But if your injury is serious enough to require prolonged medical attention — as mine was — you’ll need to play the long game, and how well you play it will determine how long you have to. Here’s what I learned from nearly a year on the sidelines, and how you can recover faster after an injury.

Finding a healthcare professional who knows your sport and has both an excellent reputation and extensive experience treating athletes is key for expediting your diagnosis and recovery. That’s because they’ll understand how your injury will affect your ability to move in the context of your sport, thus allowing them to customize your treatment plan and develop a realistic prognosis for how long it will take you to return to training and racing. Believe me when I say that such “insider” care can make a world of difference, especially when it comes to minimizing your recovery time.

How do you find such a physician? Ask friends and training buddies for recommendations, consult with your coach, and (most important) do your own research. Before finally settling on a doctor to perform for my surgery, there wasn’t a shoulder surgeon west of the Rockies I didn’t Google-stalk. I ultimately chose the one that I did because he had been a competitive cyclist, had a successful track record treating athletes, and came highly recommended by a friend who’s a physical therapist, and whom I trust implicitly. When my friend said, “EK, I would trust him with my shoulder, and I’ve seen hundreds of his patients,” I knew that I had found the right doc. It’s your body, and you want to make sure you have 100 percent faith in whomever you choose to repair it.

As the saying goes, “Hope for the best, but prepare for the worst.” When you receive your post-injury diagnosis and prognosis, be ready to accept them regardless of whether or not they’re what you hoped to hear.

I came by that advice the hard way. When I went to see my shoulder specialist to learn the results of my MRI, I expected him to tell me that I could fix my injury with intensive physical therapy. Instead he told me that without surgery there was a 100 percent chance my shoulder would dislocate again. “Surgery is a when,” he said, “not an if.”

His diagnosis hit me like a freight train. I wanted to cry. I struggled not to scream. I bit my tongue, fighting back the urge to tell him that his years of medical experience must have been ill-spent if he couldn’t see that my injury wasn’t serious.

I was wrong and he was right, of course, but it took me a while to accept that. Some people liken the psychological process of dealing with a serious injury to that of grieving, suggesting that both follow the same progression — denial, anger, bargaining, depression, and acceptance. I’m still not sure which phase I was in when I went under the knife a couple of weeks later. I knew it’s what I had to do to have any hope of remaining a professional athlete, but I definitely had not accepted my situation yet. I just didn’t see any other option that had any chance of helping me return to racing.

Learn from my mistake. If you are recovering from an injury — especially one that required surgery — I urge you to do all you can to move through the grieving process as quickly as possible. That’s easier said than done, but if you surround yourself with strong people you trust and love — and who feel the same way about you — it expedites the process tremendously. They can help you see that your injury is just a blip on your athletic journey. It doesn’t define you, and it won’t last forever. It’s almost a rite of passage. When you realize all of that, you can finally start healing.

I speak from experience. After I reached the acceptance stage, everything — and I mean everything — became a whole lot easier. It took me almost 2 months to get there, but once I did, I stopped trying to rush my rehab, and I committed to following my treatment plan to the letter. Almost immediately, my progress began to pick up speed. 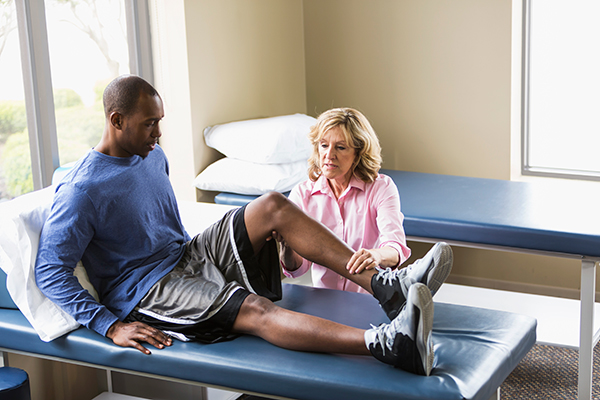 Endurance athletes are incredible creatures. To succeed at what we do, we need intense focus, a strong work ethic, and an unwavering dedication to our sport. All of these things help us through the highs and lows of training and racing, including getting injured.

Although it took me a while to accept my post-injury situation, I eventually threw myself into my rehabilitation with the same guts and gusto with which I train. I went to three 1-hour physical therapy sessions a week, and did two sessions of mind-numbingly tedious rehabilitation exercises a day. Don’t get me wrong — my path to recovery wasn’t smooth. Far from it — my arm/shoulder complex had been unstable for years, and I had learned a lot of dysfunctional patterns to compensate for that. Unlearning those patterns took longer than anticipated, but I stayed focused, tried to remain positive, and kept telling myself that it would all work out in the end (which, of course, it did).

Through it all, I refused to allow myself to be just an “injured athlete,” waiting idly for my shoulder to heal. I used all of the free time that would otherwise have gone to training to pursue other passions and pastimes. That helped me keep my head in a good place. I also learned how important it is to maintain a sense of humor. The road to rehabilitation is not always an easy one, so staying upbeat is a key part of remaining motivated. Indeed, maintaining the ability to laugh at oneself during bleak times can be powerful medicine.

It’s easy to get hung up on everything that you’re missing after an injury. Your training buddies might be posting all sorts of PRs on Strava and talking about upcoming events with the same excitement and fervor that you typically do. Competitors might be winning races that you feel you could have won. And you might find yourself filling out race refund requests instead of registration forms. But you need to learn to shut all of that out and train your brain to focus what you can do, because, trust me, there is still a great deal that you can do to stay in shape and work toward your goals.

Even though my right arm was completely out of action, I managed to swim using only my left arm three or four times a week from mid-November through March. That’s nearly 5 months of one-armed swimming, but it meant that I could get in the pool, see my teammates, and maintain my feel for the water, which is important for swim-stroke mechanics. I also spent a lot of time in the pool doing vertical kicking and kicking with fins or a kickboard, all of which turned me into a total demon kicker; there’s no one on my team who can touch me at kicking now!

Outside of the pool, I began going on long walks, running on an AlterG (anti-gravity) treadmill, riding gently on the trainer, and working with my strength coach in the gym (mostly on core and lower-body conditioning). Progress was slow, but my coach and I were able to gradually increase my training volume so that by April/May I was putting together a 13 to 15-hour training week. Granted, that’s less than half of the time I usually spend training each week, but it was progress, and it felt good.

Once you experience the sidelines, you never want to return to them. The best way to do that is with “prehab,” which means incorporating exercises that can help prevent future injuries into your training program. Even though my shoulder is healed, I continue to do a lot of joint-specific strength and mobility work to keep it healthy, for example.

I also can’t advocate enough the importance of following a total-body strength and conditioning program. You don’t need to hit the gym nearly as often as you run, swim, or bike, but logging a couple of hours there each week can increase your speed and power, and greatly reduce your risk of injury.

The winter months are the perfect time to build a strength base, which will help ensure that your body is robust enough to handle all of the miles you plan to put it through come spring. So will eating healthfully, sleeping adequately, and engaging in regular self-care (foam rolling, stretching, mobility training, etc.). If you look after your body, it will reward you.

15 Exercises to Add to Your Lower-Body Workout

Is It OK to Do Push-Ups Every Day?