My Instagram feed is filled with images from #womenwholift  and #fitnessaddicts who are living the meal prep lifestyle. The best of the bunch are the epic weekly meal prep photos from our very own Social Media Manager, Amanda Meixner, which we often feature on the Beachbody Blog. Amanda’s been meal prepping for a long time, and has all the details worked out. She knows how to keep her shopping list simple and has a repertoire of easy, go-to recipes that she can prepare in an afternoon. She also understands nutrition and knows how her meals combine to meet her macronutrients.

Last Sunday, I decided to follow Amanda’s lead and make ALL of my meals for the week at once. Even though I’m an experienced cook, I wasn’t really sure where to begin, how long it would take, or how many calories I was getting myself into. With the intention to be as fast as possible, I checked what I already had in the fridge (some fennel, a tub of nonfat Greek yogurt), outlined a menu, and wrote my shopping list. Since this was my first real attempt at meal prep, I decided to keep it pretty simple and eat the same meals every day. I looked at the different sizes of food storage containers I had and tried to think of meals and snacks that would fit. Faced with a weekend trip to the Whole Foods parking lot or the Hollywood Farmers Market, I chose the latter.

The Hollywood Farmer’s Market is not easily rushed through. There are families meandering three-wide, pushing strollers and walking dogs. Tourists wander from booth to booth, and who can blame them, all of the fresh produce looks beautiful. I realized quickly that I was going to break the first rule of meal prep, “Make your shopping list and stick to it.” I adapted my menu on the fly, based on which veggies were available and for the best price. A head of red cabbage was only $2 and goes a long way, I decided to make a slaw. Beets were $1 a bunch, so I bought three (that is a LOT of beets). 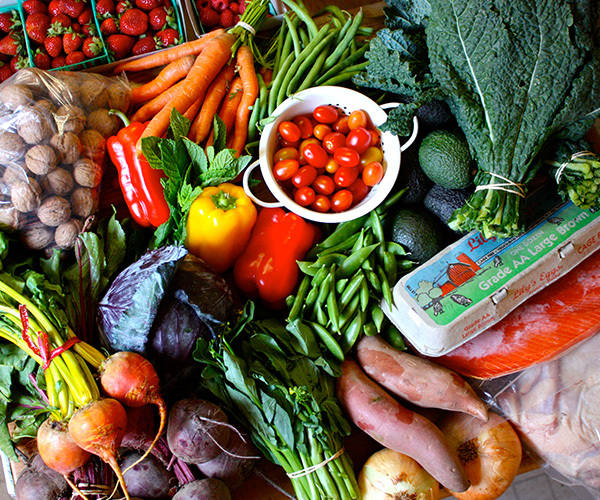 As soon as I got home, I washed strawberries and laid them out on cookie sheets to freeze for my breakfast smoothies. I didn’t bother to remove the hulls, they disappear when blended and add a little extra green to my diet.

The green beans and snap peas had their ends trimmed and then were plunged into boiling salted water for a couple of minutes until bright green and still crisp. They finished in a bowl of ice water to stop the cooking process. As a dressing, I made a quick pesto in the blender with arugula, cashews, mint, lemon juice and a little olive oil. I thought that combination would be a nice morning snack with a hard boiled egg.

I scrubbed the beets and carrots and roasted them with the skins on, along side sweet potatoes and sliced fennel. I washed the kale and stripped its leaves from its ribs, chopped it, and began building my salads. Red cabbage and another fennel bulb got finely chopped for cole slaw, with a handful of sunflower seeds, and dressed in olive oil and apple cider vinegar. Last, I cooked a large filet of salmon and then separated it into 5 pieces. Unfortunately, the chicken I bought was frozen, so I would have to wait a couple of days for it to thaw before cooking.

Here are my meals for the week, minus the chicken: 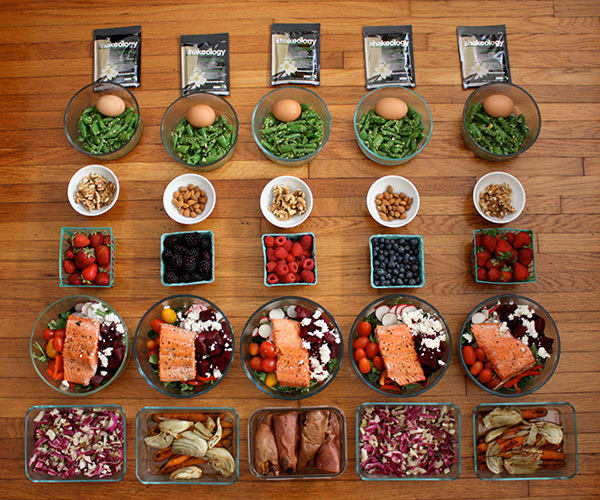 2. My kitchen stayed clean all week, and the only dishes to wash were my blender, Pyrex containers, and the occasional pan.

3. My fridge is never filled with “food”… it’s filled with ingredients. In order to eat, I have to cook something. I liked being able to open the fridge door and see stacks of prepared meals.

4. I was never tempted to snack on chips or order take out. With healthy meals on hand, my nutrition was on-point all week.

What I Did Wrong:

1. I didn’t stick to the grocery list. I got excited at the farmers market and bought extra items that caught my eye or were a good deal. I ended up with extra food that I didn’t eat. Luckily most of it will stay fresh enough to use next week.

2. I thought I wouldn’t mind eating the same foods every day, but by Thursday, my gorgeous salad was not nearly as tempting as it had been on Monday. By Friday, I’d had enough, and my fish did not smell as fresh as it should. I skipped it.

3. Shopping and cooking took 4 hours. I don’t have a lot of free Sunday afternoons to spend at the market and in the kitchen. I’ll need to find a way to speed up my meal-prep game if I’m going to continue.

4. The pasture-raised chicken I bought at the farmers market was sold frozen. It would take two days to thaw, so I couldn’t eat it until Tuesday night. In the future, I’ll buy individual chicken breasts.

1. I like more variety in my meals. Next time I meal prep, I’ll make two choices for lunch, and two for dinner.

2. Fish is less appealing 5 days after it’s cooked. My end of week meals will be vegetarian or use canned tuna.

3. Kale and cabbage were great choices because they kept their crunchiness all week.

4. Scrambled eggs and sweet potatoes are a match made in heaven, and make a great dinner!

Do you meal prep? What are some of the mistakes you’ve made or tricks you’ve learned to make it easier or faster? Let us know in the comments. We may feature your tips in a future Meal Prep Mondays post.  Want to see your meal prep ideas on The Beachbody Blog? Email your healthy meal prep photos to Editors@Beachbody.com and you could be next! Be sure to tell us what it is and include your Instagram or Twitter handle for linked photo credit!

All photos by Kirsten Morningstar