Cycling – whether indoor or outdoor – gets a reputation as a pretty “easy on the body” venture.

After all, while cycling is a great way to strengthen your heart and lungs, it’s inherently low-impact on your joints.

That said, just like with any exercise, if your technique isn’t on point, cycling injuries are more likely to hit your body.

We’re not just talking about traumatic injuries like a pulled muscle or broken bone from falling off of your bike.

Incorrect set-up and riding mechanics can lead to overuse (aka wear-and-tear) injuries that can very quickly drain the fun from your workouts — or halt them altogether.

Here, experts share the four most common cycling injuries, along with the best ways to prevent aches and pains while cycling.

Every cyclist knows the literal pain in the butt that starting a biking routine can be.

Many riders can develop straight-up saddle sores when cycling.

What are saddle sores?

They are patches of skin on the buttocks or groin that, due to friction against the bike seat, get irritated, inflamed, and if they open, can even get infected, explains professional cycling coach Garret Seacat, CSCS.

How to Avoid Them

As common as saddle sores are, they are not OK, or something to just accept will happen.

When getting started with a new bike – or if you have any discomfort – Seacat recommends going to a specialty bike shop to get fitted for a bike seat.

“There is often a device you can sit on that will measure where your sitz bones are,” he says.

When riding, you should be perched on top of these sitz bones (aka the ischial tuberosities) and not scoot back and forth.

Seacat says that when people have rear-end pain, they often look for a wider seat, but a narrower one may actually be what enables you to get into a correct, more comfortable position.

And while you’re at it, buy special cycling shorts.

“When you’re cycling, without a doubt, the best investment you can make is the bike itself, but close behind are cycling shorts,” Seacat says.

Look for a pair ergonomically cut for your biological sex, he says.

Resist the urge to wear underwear with them; doing so increases your risk of chafing.

There’s a reason that patellofemoral syndrome – pain at the front of the knee, around the kneecap – is sometimes called “cyclist’s knee.”

“People who cycle tend to get a lot of knee injuries due to muscular imbalances,” says kinesiologist Jake Harcoff, C.S.C.S.

One primary reason: Cycling develops the quads and hip flexors while keeping them in a shortened, flexed position.

“The quads can get so tight they pull on the tendon that goes over the top of the kneecap,” he explains.

It’s also common for cyclists to have their seats incorrectly positioned, which can dump more stress into overly tight, overworked tendons and ligaments, he says.

For immediate relief, check your bike seat’s height. When you stand next to the bike, it should be at hip height.

And when you’re cycling, your knee should never completely straighten, Seacat explains.

(Remember, you should pedal through the balls of your feet, not your heels.)

Over the long-term, focus on integrating posterior-chain-strengthening exercises like deadlifts, hip thrusts, and reverse lunges into your workout routine.

Doing this will strengthen the muscles that connect to the back of your knee, helping to balance out your leg musculature and reduce your risk of cycling injuries, according to Harcoff. 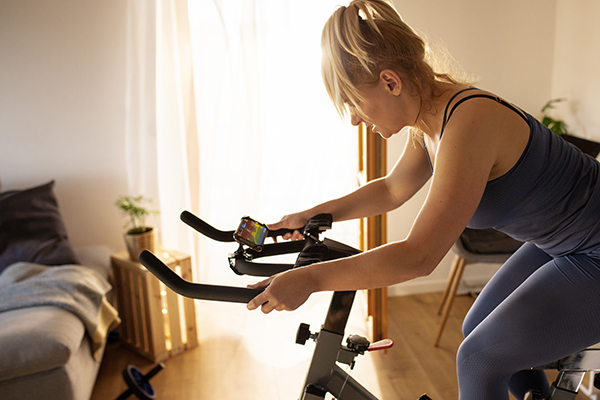 Tight hip flexors can make more than your knees ache. They can also throw your lower back out of whack, Harcoff says.

He explains that it’s common to see cyclists have what’s called an anterior pelvic tilt.

With such a tilt, the hip flexors pull the front of the pelvis toward the floor, angling the buttocks upward and making the lower back arch excessively.

That can stress both the spine and the muscles and tissues that help support it.

Cycling tightens the hip flexors, so you need to perform stretches dedicated to relaxing them.

Harcoff says one of the best stretches you can do to relieve tension in the front of your hips is the couch stretch.

To perform the couch stretch:

While anyone who keeps their arms locked out or leans forward when cycling is likely to experience some upper-body joint pain, these cycling injuries are most common among people who take indoor cycling classes, Harcoff says.

Because indoor cycling classes typically involve a lot of upper-body movements that use the handlebars, many class-goers (and instructors) lean forward excessively when riding.

As a result, they can stress out their elbows and wrists.

You shouldn’t need to put a ton of pressure on your arms to keep from falling forward on your bike whether you’re sitting or standing.

If you’re unable to perform upper-body moves or hold onto the handles without dumping your weight into your hands or locking out your elbows, you likely need to spend the bulk of your time riding upright.

Then, between classes, you can work on developing the core strength necessary to take a more forward posture without potentially irritating your arms.

Focus on stability and anti-rotation exercises like the planks, dead bug, and Pallof press.

The MYX Home Studio by Beachbody is now available in the U.S. With a MYX bike and Beachbody On Demand Interactive (BODi), you’ll get personalized training, endless workout options, and more.

The Benefits of Active Recovery

Can a Low-Impact Workout Help You Hit Your Goals?