Move over, food trackers. There’s a new bite counter in town. Wait, what?

You heard right: Instead of tracking your calories (boring and tedious), a newfangled prototype wearable tracks how many bites of food you take instead, reducing the mathematical gymnastics of food tracking to a single number.

Right about now you’re probably asking, “Why in the world would I want to count every single bite I take?” But you really should be asking, “When was the last time I mindlessly ate an entire bag of [insert food here] sitting on the couch watching Game of Thrones?” (We’ve all done it; no judgment.)

In a study published in the Journal of the Academy of Nutrition and Dietetics, researchers at Clemson University analyzed how seeing the number of bites people took during a meal influenced how much they ate. The result: People ate less.

How Does a Bite Counter Work?

The subjects wore bite-counting devices (similar to fitness trackers) on their wrists. The devices counted bites by tracking their wrist motions while they ate. The study found that getting real-time feedback from the bite counter “significantly reduced intake” and the total number of bites they took.

The researchers propose that bite counting could eventually be an alternative to calorie counting. And like calorie counting, a person’s “bite goal” would be based on his or her current weight, gender, age, activity level, typical diet, and other factors.

It’s worth noting that when subjects were given a “low-bite goal” of 12 bites per meal, they hit that number — but took bigger bites. Clearly there are downsides: The “big biters” prove that there are vast and myriad ways to cheat, as with any kind of tracker. And since it’s only tracking wrist movements, the bite counter obviously can’t track the calories or nutrition in each bite. So, if you’re using a straw or a gigantic serving spoon, then it’s possible this isn’t the tracker for you. 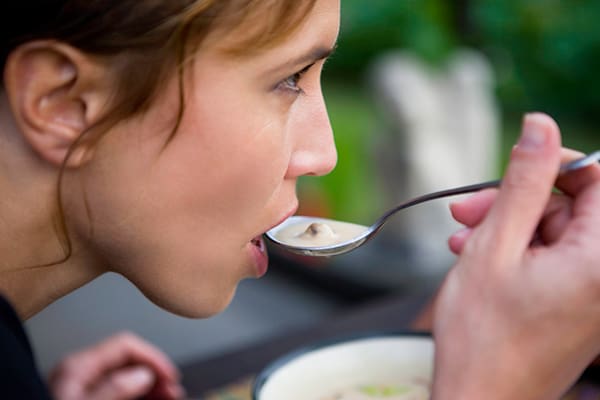 That said, when used with a healthy serving of common sense — and regular-sized bites — the results suggest that a bite counter may help turn mindless couch snacking into mindful eating. Research shows that mindful eating — eating slowly, taking small bites, and avoiding distractions, among other things — can help people recognize bad eating habits so they can course correct.

The basics of a nutritionally balanced meal plan still reigns: Take few, if any, bites of things like chips, ice cream, and white bread, and more bites of foods like vegetables, fruits, whole grains, and lean proteins. If counting calories make your head hurt, simply your meal planning by using Portion Fix containers to take the guesswork out of how much food you should be eating throughout the day.

At the end of the day, a bite tracker isn’t going help anyone get abs like The Rock or gams like Giselle, but it may be the nudge that some people need to stop the mindless munching.