So while not exercising poses a ton of health risks, it’s also true that no type of exercise is risk-free.

Therefore, if you want to know if an exercise is worth your time, you need to think not about whether someone you know once strained a knee while doing it, but whether the potential payoff you get from that move outweighs the pain that might result if you flub up your form—and by a margin of benefit that exceeds the probability of injury.

It’s also a bit of a judgment call, because big guns or a bubbly butt might be really important to you or your boyfriend, who just want to look great at the beach, and less so to your Aunt Joan and Uncle Charlie, who just want to wake up with less pain. Different strokes.

Nevertheless, there are a handful of controversial exercises out there that have been getting a lot of negative press lately, and we thought we should weigh in and let you know if they’re worth the trouble. If they’re not, we’ll let you know what to do instead.

5 Controversial Exercises and Whether You Should Do Them

The beef: They hurt your shoulders!

The truth: They likely won’t—as long as you use proper form. 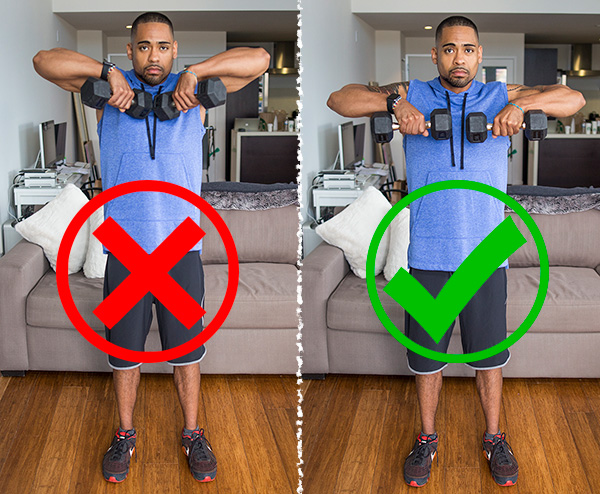 Among trainers, the phrase “use a full range of motion” is one of the oftenest-repeated phrases. And in general, it’s a great idea.

Not so with the upright row. The exercise has you “abduct” (or lift) your elbows with your arms in the “internally rotated” position (think of bringing the backs of your hands together in front of you). A 2011 study found that raising your elbows above shoulder level in that position can cause a painful and potentially harmful rubbing together of the bones and connective tissue in your shoulder joints, known to therapists as impingement. The higher the elbows go, the greater the impingement.

But as long as you don’t raise your elbows above shoulder level, don’t experience any pain in your joints (a good pass-fail test for any exercise), and your shoulders are generally healthy, you should be just fine doing upright rows.

The beef: Pressing or pulling anything “behind the neck” puts the shoulder in a potentially harmful position.

The truth: True that. 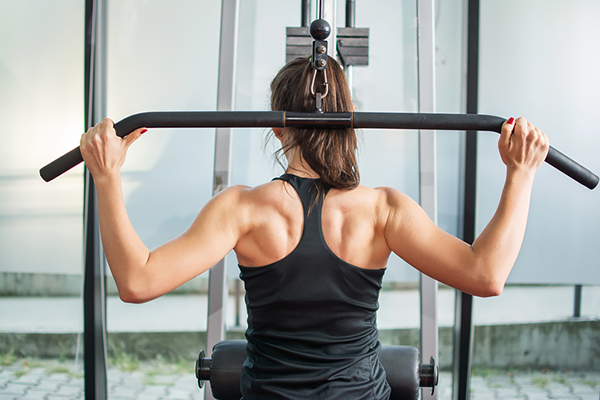 Back in the ’70s and ’80s, the “behind the neck” lat pulldown was big among hardcore lifters. If you didn’t turtle your neck forward and pound your shoulders and upper back with the bar during each rep, you might as well have stayed home.

These days, many of those folks have bum shoulders.

When you perform the behind-the-neck lat pulldown, your arms are externally rotated (picture hitchhiking while facing traffic, right elbow tucked into your side, lower arm rotated outward so you can poke that thumb skyward: that’s external rotation in your right shoulder).

Nothing wrong with external rotation per se—most of us inveterate slouchers need more of it. But when you combine external rotation with the action of abducting—or raising—the arms, as you do in the behind-the-neck lat pulldown, it’s a recipe for our old pal impingement. Over months and years of performing the controversial exercise regularly, behind-the-head pulldowns can overstretch ligaments in your shoulders, which can eventually require surgery to correct.

Unlike the upright row—in which you can cut out the offending part of the movement—there’s almost no part of this controversial exercise that isn’t hard on your shoulder joints.

Lucky for you, all you have to do instead is perform your pulldowns (and your chin-ups and pull-ups, for that matter) to the front—a movement that prompts better activation of your back muscles anyway.

The beef: Some say this move isn’t “functional” and puts too much pressure on your knee joints.

The truth: …and we agree.

There’s some debate over how to define “functional training” (Wikipedia calls it “training for activities performed in daily life”). But for the sake of simplicity, it can be described as training that builds strength and power that translate beyond the gym. It usually focuses on compound (i.e., multi-joint) exercises, training in multiple planes of motion, not lifting in a seated position, and using dumbbells, resistance bands, medicine balls, and other “free weights” that don’t lock you into a set range of motion.

By that definition, it’s easy to see why leg extensions don’t fit the bill: You’re seated, movement is limited primarily to one joint (the knee) and one muscle group (the quadriceps), and your legs are forced to follow a range of motion determined by the machine. It’s hard to think of a day-to-day movement that looks like the leg extension.

Another knock against this controversial exercise is that it puts excessive stress on the knees. The reason: The resistance is placed near your ankles. That creates high amounts of torque in your knee joints every time you lower the weight.

But the most compelling reason to avoid the leg extension is that it’s simply not the best use of your limited workout time. In roughly the same time it takes you to perform three sets of this controversial exercise—which works the quadriceps almost exclusively—you could do three sets of very-functional walking lunges, which also work the glutes, calves, hamstrings, core, and cardiovascular system in a manner very similar to walking, running, and climbing—no $2,000 machine required.

The beef: This controversial exercise develops the legs without developing the core; it’s potentially dangerous for the lower back; it’s inconvenient.

The truth: The leg press is one of the most hotly-debated exercises in the gym. Some people say it’s a great leg builder; others contend it’s dangerous and pointless.

We’re in the second camp. 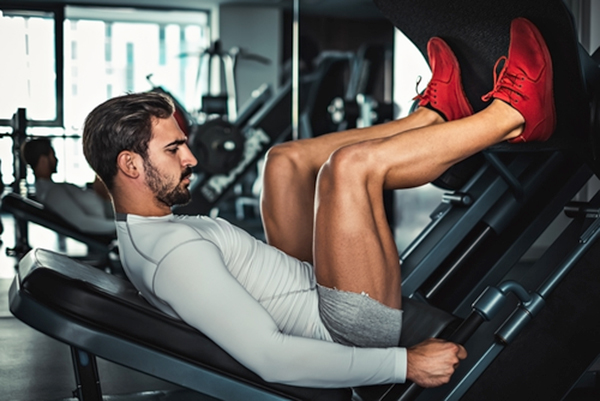 Picture yourself sitting in the leg press machine. You put your legs on the platform, push upward and flip the safety levers. As you lower the weight, what happens to your lower back?

If you’re like most people, it rounds. Just like you know it’s not supposed to do, ever, when you’re lifting weights. That rounded position produces what spine specialist Dr. Stuart McGill calls, in his book Low Back Disorders, “herniating conditions” for your spinal discs. Herniations, in case you aren’t aware, are bad.

Secondarily: the leg press doesn’t look or feel like any movement we encounter outside the gym. One, single time when I was in high school, I remember sitting on a steep embankment in snowy Vermont, my back braced against a tree and my feet pressing like mad against the back end of a stalled snowmobile. As I cursed and strained to push that ’80s-era monster up the hill, I clearly remember thinking to myself, “Hey! This is a lot like a leg press!”

Otherwise, I can’t think of one time in 30-odd years I’ve performed anything like a leg press outside a gym.

Bottom line: the leg press has a poor risk-to-reward ratio. The potential for herniating a disc is relatively high, while the possible reward—bigger thighs and not much else—is relatively low.

You also need a big, heavy, expensive machine that’s really hard to match to your drapes.

Your workout time is better spent on squats, lunges, rear-foot elevated split squats, and walking lunges—movements that work the same muscles, build practical strength, and come accompanied by a lower risk of injury when you perform them with good form.

The beef: Some say squats are hard on your knees and back.

The truth: The squat deserves its reputation as the king of lower body exercises. If you perform it with good form, few other movements can match its potential for building strength and muscle. 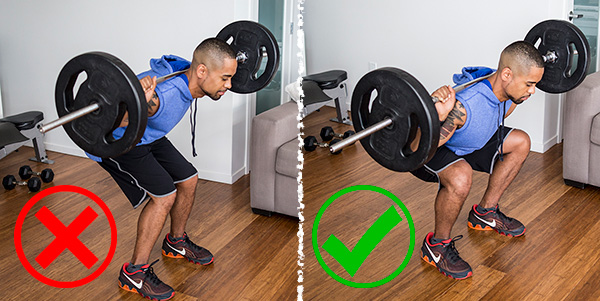 Admittedly, there are a few common problems with this tough-guy maneuver—especially the back squat variety, wherein you drop into a full squat position with a heavy barbell across the backs of your shoulders. Some people lean too far forward on the move and tweak their backs. Others allow their legs to cave inward in the bottom position, straining their knees.

Most of these issues arise, though, from using too much weight. If you can keep your ego in check and your form tight (e.g., back flat, hips back, chest high, and knees tracking over your feet rather than collapsing inward) squats are among the best moves you can do in a gym—they keep your hips healthy, teach you to stabilize your core properly, build your quads and glutes, and help athletic types jump high and run fast (for more on proper squatting, read this article.)

So keep the squat in your rotation, just don’t use so much weight that you can’t maintain picture-perfect form. And stop all sets before your form gets sloppy.

Most people can make great progress by simply by swapping the barbell for dumbbells, or ditching weights altogether and doing high-rep bodyweight squats. Work up to high reps (100, squatting low, is tough for just about anyone); speed reps (60 in one minute is another benchmark); one-and-a-half reps (squat down, come up halfway, squat down again, then come up all the way); or explosive reps (jump at the top of every rep). That’s all the squatting most of us need.

And if you really want a safe workout that delivers results, stream any of hundreds of scientifically-derived programs at Beachbody On Demand. Press play now on 21 Day Fix, Insanity, CORE DE FORCE and more on your smart TV or mobile device.