Biceps exercises are a real bone of contention for some folks.

Functional gurus will tell you that bulging biceps won’t help you escape a burning building. Powerlifters will say they don’t do much for your deadlift. Some fitness curmudgeons even argue that isolated biceps work is a waste of time altogether; if your workouts include chin-ups and rows, they reckon, you’re getting all the biceps action you need.

But biceps exercises may be more functional than the workout pundits claim. “Yes, you engage your biceps when you perform a row or a pull-up, but they aren’t the primary target,” says Beachbody’s Senior Manager of Fitness and Nutrition Content Trevor Thieme, C.S.C.S. “They assist your back muscles in those exercises, so they’ll never become as strong as they could if you were to also do biceps-focused exercises such as the curl.” The stronger your biceps are, he says, the more assistance they can provide during the compound moves in your workouts — and the more total-body strength you can build as a result.

Below are 11 of our favorite biceps-building moves, all pulled from Beachbody On Demand’s massive workout library. Incorporate a few sets of one or two of them into your own workouts a couple of times a week to build stronger, more defined arms. For complete arm workouts — and to strengthen every other part of your body — click here.

10 Biceps Exercises for Your Best Workout

Benefits: This move is a strength-training staple for a reason. It’s a simple movement with powerful results. And, unlike barbells, dumbbells allow you to work each arm independently, which can help correct and/or prevent muscle imbalances.

In and out biceps curl

Benefits: By alternately curling the dumbbells straight up and out to your sides, you’ll target both the long and short heads of your biceps, increasing both the size and girth of your arm.

Benefits: Stresses both heads of the biceps, as well as the brachialis and the forearm extensors.

Benefits: You’ll be able to lift more weight, thanks to the elbow of your working arm being supported.

Benefits: In addition to your biceps, this exercise targets two other key elbow flexors that also add size and definition to your upper arms: the brachialis and the brachioradialis.

Benefits: Significantly increases your biceps’ time under tension — a key growth stimulus — while giving your nonworking arm an additional isometric challenge at the toughest point in the movement.

Benefits: Emphasizes the brachialis on the outside of the upper arm, with additional help from the brachioradialis, the thick muscle on the thumb-side of your forearm.

Benefits: Alternately lifting one weight at a time adds an element of instability that can increase muscle recruitment — and your growth potential.

Benefits: Places the wrists and arms in a mechanically advantageous position, which typically allows for more weight.

Benefits: Traditionally considered a back exercise, the chin-up is also one of the most effective exercise you can do to strengthen and sculpt your biceps.

How to Eat for Bigger Biceps

Like any muscle, biceps won’t grow or get stronger unless you support them with smart nutrition before and after your workouts. Exercise stresses your muscles — recovery and growth take place in the interim. The best way to maximize recovery for building strength and mass is to eat sufficient protein, the building block of muscular development. (More on that below.)

Of course, other nutrients are helpful as well. Creatine is one of a few proven performance-enhancing supplements, shown to help boost power and give you added strength to gut out a few extra reps in your quest for muscle growth. The safest, least expensive, and most effective version of the supplement is creatine monohydrate, which is the variety used in Beachbody Performance Creatine.

How much protein should I have per day?

Those looking to gain muscle should average .5 to .9 grams per pound of bodyweight a day. That works out to 90 to 162 grams of protein for a 180-pound man. The key is to spread that consumption throughout a day (to provide a constant stream of aminos to your muscles) since protein isn’t stored.

An easy hack for ensuring that you get enough protein is a post-workout shake. Look for formulations that contain 20 grams per serving, such as Beachbody Performance Recover, as that’s the per-serving dose research shows to be most effective.

You can also maximize muscle growth between workouts by consuming a protein supplement such Beachbody Performance Recharge right before bed. It contains slow-release casein protein to enhance muscle recovery and growth while you sleep. And the added tart cherry powder can help reduce exercise-induced muscle soreness. 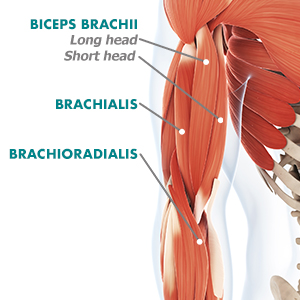 As its name suggests, the biceps muscle has two parts, or heads (long and short). Both originate at the top edge of your shoulder blade and converge about midway down your humerus (upper arm), eventually attaching to your forearm. Stand with your palms facing forward and the long head can be found outside the short one (nerdy fact: Biceps — translated literally as “two heads” — is the word for the single muscle. There’s no such thing as a “bicep.”)

Most exercisers forget that the biceps cross not just the elbow but the shoulder joint as well; that’s why you feel a stretch in your biceps when you reach your arm behind your torso. When a biceps is injured, it typically happens at or near the shoulder attachment, and that’s another non-vanity-related reason to target the biceps during your workouts: You’ll toughen up that connective tissue and reduce your chances of tears and strains.

To the outside of the biceps is the brachialis, which originates midway down your upper arm and attaches to your elbow. Together, the biceps and the brachialis flex — or close — your elbow joint, pulling your hand closer to the front of your shoulder. Your biceps also aid in supinating your hand, or turning it palm-up.