You already know cycling can chisel your legs and firm your glutes while zapping hundreds of calories per hour. But there are a ton of other ways cycling can benefit your body and brain, many of which require pedaling from point A to B.

That’s right — some of the best benefits of cycling can only be gained by riding on a road or trail.

Here are more reasons to strap on your helmet and pull on your padded bike shorts!

You Bike Farther, Faster, and Harder!

You know that high you get in bike class, when the music is cranking and you’re pedaling at full speed? If you hit the same RPE (rate of perceived exertion) in the great outdoors, you’ll likely burn more calories without feeling like you’re performing any extra effort.

Researchers don’t know why cycling outdoors feels easier — if it’s the cooling effect of wind, the way you can coast back down a hill you’ve climbed, or simply being distracted by the sights — but it does.“There may be many factors that contribute to this [cooling effect], including enhanced cooling in the outdoors as the air moves across the body,” says Dustin R. Slivka, PhD, an associate professor of Physical Education and Recreation at the University of Nebraska at Omaha. He says no fans were used in his indoor tests rating the differences in the cycling mechanics when riding outdoor versus riding on a stationary trainer.

Or it might just be a difference in perception or psychology, says Slivka who has studied both indoor and outdoor cycling benefits for years. 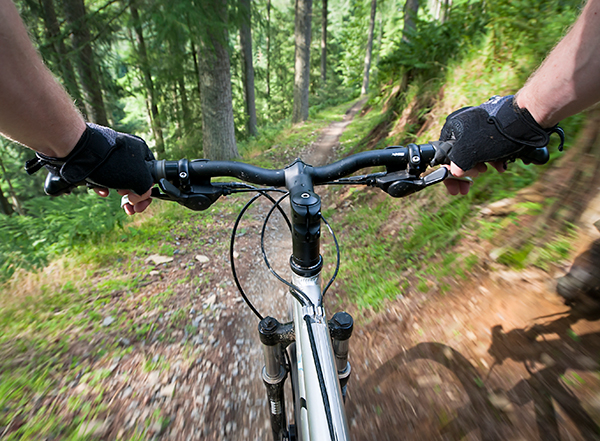 Your Bones Get a Boost (Sometimes)

Running is often touted as a bone-building workout, thanks to the strain placed on the body from pounding the pavement. (The theory, according to Slivka, is that this type of impact causes the body to build more bone.) But now it looks like mountain biking (as opposed to road cycling) can also give you a stronger skeleton.

A new study in the European Journal of Sport Science found that mountain bikers had stronger, larger, and denser radial bones than both road bikers and a non-cycling control group. Scientists think that the differences in terrain and having to continually stabilize yourself so you don’t fall or crash may be what leads to improved bone density.

You May Become More Flexible

Flexibility isn’t a commonly cited benefit of cycling, but riding on two wheels may help to lengthen your hamstrings, the muscles in the back of your thighs. Just picture a pro cyclist — often leaning way forward, with his or her chest almost on the knees in order to become as aerodynamic as possible. This forward position stretches the backs of the legs, sort of like a sit and reach test, in which you reach for your toes. In fact, a recent study in the International Journal of Sports Medicine found that road cyclists did better in the sit and reach test than mountain bikers or non-cyclists.

Cycling Could Make You Smarter

Cycling may help you unlock your mental superpowers, according to a number of scientific studies. One, from Scandinavia, found that kids who biked to school had an easier time doing math. Another, from the UK provided an explanation: 30 minutes of cycling saturated the pre-frontal cortex — the part of the brain associated with executive function — with oxygen, improving cognitive performance. Although the second study was done in a lab, cycling to an important event could be an easy way to make sure your mind is firing on all cylinders.

Cycling Can Lower Your BMI

Most types of exercise can be effective for weight loss, but active commuting — in particular, cycling to work — builds exercise into your day. Oliver Mytton, M.D., M.P.H, of the Centre for Diet and Activity Research at the University of Cambridge, who studies active commuting, sums it up this way: “One advantage of cycling to work is that it is done regularly — perhaps 10 rides a week — and that it may be sustained over many years.

One of the most important things for weight loss and maintenance is sustaining any behavior change. Once you revert back to old behaviors the weight comes back on. “If you commit to cycling to work it may be something you do for many years, until retirement,” he says. In one of Mytton’s most recent studies, he found that people who biked to work for a year had a lower BMI on average than those who never cycled to work.

You don’t even have to cycle all the way to the office. “Some of the people in our study drove to a car park on the outskirts of Cambridge and then hopped on their bike to get to their work. Similarly some people combined it with train commuting — and others might alternate between bike and drive commuting, although that is much more susceptible to stopping.”

Best of all, as one recent study from Spain found, cycling to work might inspire you to spend more time exercising overall! When is the last time you hopped in the saddle to take your bike for a spin?