Did you know you know there’s a simple way to help lower your blood pressure, improve your cholesterol, and reduce your risk of dying from all sorts of scary-sounding things—and you don’t even have to leave the dinner table to do it?

Intrigued? Then consider replacing the refined grains in your diet with whole grains. What are whole grains? They are cereals and seeds that have not been milled or processed to remove their hard exterior. This outer layer, called the bran, contains healthy oils, fiber, and protein. This is stripped away when the grain is refined. Whole grains are complex carbohydrates that take the body longer to digest, so their nutrition is released slowly and continuously, leaving you feeling energized and full for much longer, partly because they don’t spike your blood sugar. They are an excellent source of dietary fiber, protein, iron, potassium, and manganese.

Misleading food labels have sparked plenty of confusion about what is and isn’t made from whole grain. The best way to verify if your packaged baked goods are whole grain is to read the ingredient list on the back or side. If the grains listed are “whole,” then you’re in good shape. An even better way to know you are eating whole grains is to buy them whole and cook them yourself.

Some of the whole grains you might be familiar with include brown rice, quinoa, and oats, and these are fantastic. But, did you know there are a lot of other whole grains—many of which have been enjoyed around the world for thousands of years—that you can add to your meals for variety? Look for them in the bulk bins or dry goods section of your local market, where many will cost just pennies per serving. Stretch your dollar farther by blending the more exotic varieties with brown rice, buckwheat, and quinoa. Experiment to find your favorite flavor combination!

If you can cook rice or oatmeal, you can easily cook other grains. We’ve provided measurements and cooking times for you below. Use a heavy pot with a lid (or a rice cooker!) and set the burner of your stove to a medium temperature. All grains should be rinsed well before cooking and inspected for stray twigs or stones that remain from the harvesting process.

Substitute whole grains in place of white rice or pasta, add them to soup and casseroles, toss cooked grains into salads, or serve them for breakfast and enjoy like oatmeal. Cooked grains keep well in the fridge, so we recommend making a large batch and storing the leftovers for quick meals during the week. Store uncooked grains in an airtight container in a cool, dark cabinet for up to 6 months, or in your refrigerator as long as a year. 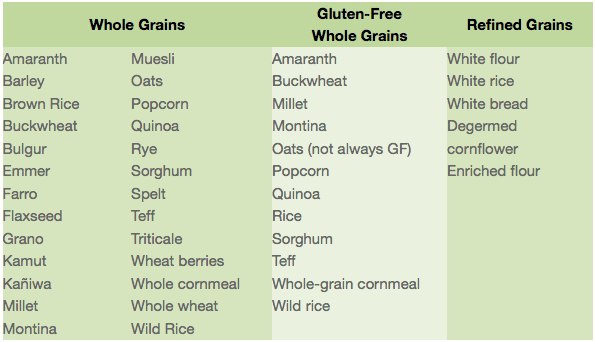 AMARANTH
While not technically a grain (it’s a seed), gluten-free amaranth has a nutritional profile similar to grain. Originally from Peru, its cultivation spread through Central and South America and played a crucial role in Aztec rituals and their diet. Amaranth contains more protein than most grains, is considered a complete protein, has three times as much calcium as other grains, is rich in iron and magnesium, and is the only grain that contains vitamin C. It has been shown to lower blood cholesterol in patients with coronary disease and hypertension.

To Cook: Add 1 cup amaranth to 3 cups water, and simmer gently for 20 to 25 minutes, stirring occasionally. Cooked amaranth has a consistency similar to Cream of Wheat (it can become sticky if overcooked). For a dish that is more like rice, combine amaranth with other cooked grains. You could also add a few tablespoons while cooking homemade soup to add thickness and protein.

BUCKWHEAT
You may already be familiar with buckwheat—no, not the character from The Little Rascals—the grain. Only, once again, it’s not a grain at all or even related to wheat. This heart-shaped seed is a relative of rhubarb, making it gluten-free. Buckwheat has a satisfying, nutty flavor and numerous health benefits. The phytonutrients in buckwheat are powerful antioxidants that protect cells from cancer-causing free radicals. Buckwheat is also a star when it comes to keeping the heart pumping—its fiber has been shown to reduce high blood pressure and cholesterol levels and its manganese promotes healthy circulation.

Make it a staple in your pantry, and you’ll be glad you did. It cooks quickly for a weeknight dinner, and can be made ahead in bulk and stored in the fridge for easy lunches throughout the week. Buckwheat flour makes delicious pancakes and crepes. Soba noodles made from buckwheat are a great gluten-free alternative to pasta.

To cook: Prepare it like rice on a stovetop or in a rice cooker. Pre-toasting in a dry pan before adding liquid intensifies the nutty flavor and is worth the effort. Bring 1 cup buckwheat and 2 cups water to a boil, reduce heat to low, put a lid on it, and simmer 10 to 15 minutes, or until all the water is absorbed and the kernels are tender.

FARRO
Farro is an ancient relative of wheat that has been eaten for centuries. Want to look like a gladiator (or a goddess)? Then eat farro, the grain that fortified the armies of the Roman Empire. Farro is sometimes called spelt or emmer, but they’re not the same. Farro has a firm and chewy texture, and a nutty flavor that is great in grain salad, stuffing, and soup. It is surprisingly filling because it has 11 grams of protein and 8 grams of fiber per cup. It is so nutritiously dense, in fact, that you might find a smaller serving than other grains will make you feel full. The fiber supports healthy digestion and satisfies for hours, making it a healthy choice for people trying to lose weight.

To cook: Farro also benefits from toasting. Add 1 cup farro to 2-1/2 cups boiling water. Cover and simmer without stirring for 20 minutes, or until tender. Farro can be cooked in a rice cooker and makes great leftovers because it keeps its firm texture for several days and never gets mushy or sticky.

KAMUT
Legend has it that a Montana man discovered several kamut seeds in a tomb near the Nile River. Later, an enterprising farmer trademarked the seeds and gave it the ancient Egyptian name for wheat.

One thing is certain, kamut is an ancient grain. It is an heirloom variety of Khorasan wheat from Iran. Research suggests that ancient grains may have more health benefits than modern strains of wheat, and recently, Canadian scientists compared several ancient grains, including kamut, to modern wheat, and found higher levels of lutein (important for eye health) and beta-carotene in the heirloom grains.

Kamut is a smart choice for a healthy diet and, as an added bonus, the branded product is always grown organically. It is high in selenium (which supports the immune system), zinc, and manganese. It also has 20 to 40% more protein per serving than regular wheat. A half-cup serving provides 6 grams of protein and only 140 calories.

To cook: Kamut is a Goliath of grains, and takes a long time to cook. Bring 1 cup kamut and 3 cups water to a boil, reduce heat, and simmer until the grains are plump and chewy. This can take 1-1/2 to 2 hours. Soaking the grains overnight will reduce cooking time.

KAÑIWA
Though the name sounds similar, don’t confuse kañiwa (pronounced “ka-nyi-wa”) with its popular cousin, quinoa. (If you’re following the Beachbody nutrition guide that came with your fitness program, you should be well acquainted with quinoa.) Kañiwa, from the Andes Mountains, is being touted as the next superfood. These tiny ruby red seeds are about half the size of quinoa and have a mild, sweet flavor. Because they are made up mostly of outer shell, they stay pleasantly crunchy when cooked.

To cook: Add 1 cup kañiwa and 2 cups water to a small pot and bring to a boil. Reduce heat and simmer uncovered for 10 to 15 minutes, until the seeds look they have sprouted little halos (like quinoa). Fluff with a fork and serve. Try it as a “breading” for meats.

MILLET
Some people think millet is for the birds, literally. It is a main ingredient in birdseed mixes, but this gluten-free seed (again, not a grain) is delicious and fluffy when cooked. It is not commonly eaten in the U.S., but it is the sixth most popular grain in the world. Millet may have been the staple grain of Asia before rice, and it’s rich in phosphorous, which is important for strong bones, and is also a source of tryptophan, an amino acid that helps reduce stress.

To cook: Toast 1 cup millet in a dry pan then add 3 cups water. Simmer covered for 15 minutes, then set it aside and leave the lid on for 15 minutes more. Fluff with a fork before serving.

For hot cereal or polenta, grind millet in a spice grinder. Bring 5 cups water to a boil, then gradually whisk in 1 cup millet. Cover, lower heat, and simmer, stirring occasionally for 15 to 30 minutes until grits are tender. The tiny seeds can even be popped like corn!

WILD RICE
Just like how many of these “grains” aren’t really grains, wild rice is not really rice. It’s the seed of an aquatic grass that was originally cultivated in shallow waters across North America. It has double the protein and fiber of brown rice and 30 times greater cancer-fighting antioxidant activity than white rice. Reddish brown to black in color, wild rice commands attention with its toothsome bite and bold nutty flavor. For this reason, and also because it’s pricey, it is often blended with other grains.

To cook: Wild rice requires more time to cook than most grains, but it’s worthy of the extra patience. Bring 3 cups water or stock to a boil, stir in 1 cup rice, reduce heat, and simmer covered for 50 minutes, until the kernels burst open, revealing a creamy interior. Uncover, fluff with a fork, and continue cooking over low heat for 5 minutes more if needed. Overcooking causes kernels to curl up and loose their distinct texture.