If you’re a basketball fan, the name Amoila Cesar might sound familiar.

That’s because in 2017, Amoila became an overnight sensation on Instagram after posting the incredible three-week transformation of  NBA superstar, Julius Randle.

Management had famously told reporters that only athletes in peak physical condition would play the following season. So after seeing Amoila’s work on social media, Julius enlisted his expertise.

In just three weeks, Amoila transformed Julius into a new player. Not only was he sporting a brand-new six-pack, but he was lighter on his feet and in the best condition of his career.

Since then, Amoila has become the go-to strength and transformation specialist among NBA athletes and celebrities alike. Jordan Clarkson, Elfrid Payton, Rodney Hood, Bobby Portos, and Jack Osbourne all count themselves as dedicated clients.

Now Amoila has set his sights on you.

With his new program, 6 Weeks of THE WORK, Amoila is bringing his gritty, tough-love training style and high-intensity workouts to Beachbody On Demand.

But before we get into the program, let’s learn a little more about the man himself.

Family Is His “Why”

As a high school and college basketball athlete, Amoila was committed to staying in shape. “I was always one of the best-conditioned guys and the hardest worker in the room,” he says. “That piqued my interest in fitness.”

However, it was suffering tremendous loss at a young age that compelled him to help people.

“My family is my ‘why.’ Eighty percent of my family is obese. Losing my mother and my grandmother to stroke, chronic disorders, and disease — things that could have been prevented — really drove me to be a trainer.”

Recently, he invited his brother out to Los Angeles for three months and helped him lose 50 pounds. That alone is an impressive feat, but Amoila is proud of the other positive changes it inspired.

“My brother became obese after my mom died. He was suffering from depression, had PTSD, and was on disability from the U.S. Army. Since he’s been getting in better shape, I’ve noticed his mental health improve. Now, he has a job and he’s more engaged with life.”

He’s Going to Show You What You’re Capable Of

In 6 Weeks of THE WORK, Amoila adapted the training regimen he created for his athlete and celebrity clients, so you can work out at home and still get awesome results.

Over six weeks, you’ll focus heavily on functional fitness, performing compound lifts, agility moves, and mobility exercises to help you build a stronger body and prepare you for real-life activities.

“Some people just have ‘show muscles,’” Amoila says. “They look good, but they can’t move well. With this program, you’re going to have both. You’ll be able to sprint down the yard to chase your dog or your daughter. You’ll be able to carry all the groceries inside without making multiple trips. 6 Weeks of THE WORK is going to help you with all aspects of your life.”

Developing mental toughness is also part of the program. Amoila is going to push you harder than you’ve ever been pushed before.

But the results will be worth it.

“You’re going to be the best version of yourself by the time you finish,” he promises. “Even your psyche will be contagious. You’re going to rub off on whoever you’re around.”

On top of that, he’s also a sports performance and fitness nutrition specialist (ACE) and a weight-management specialist (NCCPT).

While these credentials are impressive, he cites his psychology minor as the most important asset in his career. It’s how he’s been able to motivate his clients to work harder — without them even realizing it.

“I train people from all walks of life. My psychology minor has helped me understand how I can get that dog out of you and push you to the next level.” 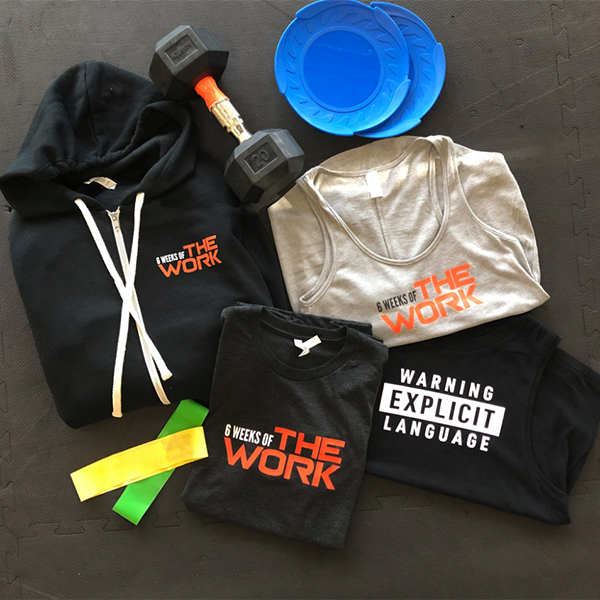 6 Weeks of THE WORK Isn’t for Everyone

6 Weeks of THE WORK is an advanced-level workout program. And yep, there will be a fitness test to help determine if it’s right for you.

Don’t meet the requirements? Don’t sweat it. Challenge yourself with another program, then come back and try the fitness test again.

Amoila will be waiting for you.

“You’re going to do exercises you never knew you were capable of doing. You might fall short the first time. But this program is for the ones who don’t accept failure.”