Even if you’re not strictly vegetarian, this meal plan is an excellent menu to try out for a week.

You’ll get your daily recommended servings of protein from familiar sources like eggs, yogurt, and Shakeology, so it’s a good choice for those who want to try a week of vegetarian eating without taking the plunge into other vegetarian sources of protein like tofu, tempeh, and seitan.

Stock up on Mason jars or your favorite air-tight storage containers and take the comprehensive grocery list below to the store.

Then, get busy in the kitchen on meal prep day with our easy to follow, step-by-step guide to prepare all of your meals for the week in a single afternoon.

Here’s what all of your delicious vegetarian meals will look like when you’re done: 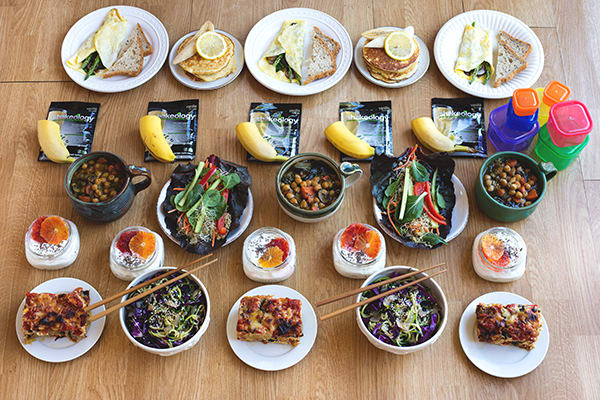 Even though this meal prep follows the 21 Day Fix meal plan for the 1,500–1,800 calorie level, anyone can use it to prepare a week’s worth of healthy vegetarian meals.

Or, you can adapt this plan to whatever Beachbody On Demand program you’re currently following.

This meal prep uses the color-coded portion-control containers to easily measure portions and eliminate the need for counting calories.

These are the Healthy Meals You’ll Eat this Week: 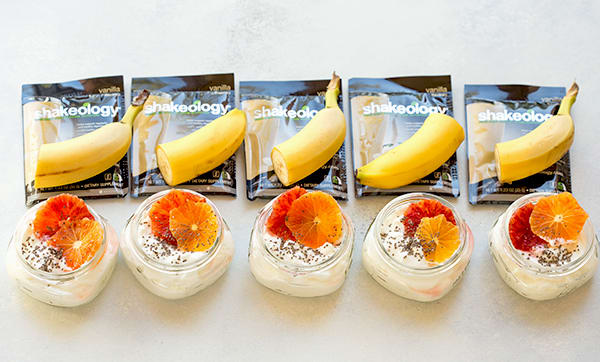 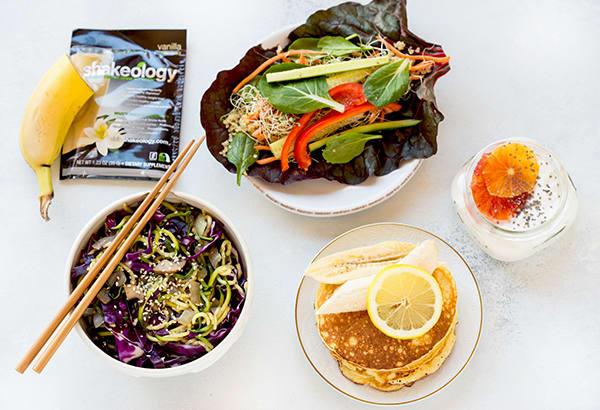 1. Preheat oven to 425°F. Line one large baking sheet with parchment paper. Prep the spaghetti squash by slicing it in half lengthwise and scraping out the seeds with a spoon.

Season the insides with salt and pepper, if desired, and arrange on baking sheet (cut side down). Place baking sheet in the preheated oven for 45 minutes or until spaghetti squash is tender and shreds easily with a fork. Remove from oven and set aside to cool. Leave oven on.

2. While the spaghetti squash is baking, prep vegetables for the week as follows: One at a time, wash, cut, and set each vegetable aside in separate bowls.

Remove the skin from the 3 onions and chop into small pieces. Remove the stems from the swiss chard leaves; reserve 4 large whole leaves for the Hummus Veggie Wraps and chop ¾ cup of chard for the Chickpea Vegetable Soup.

Rinse the asparagus, cut off the woody part of the stems (about the bottom two inches), then chop into 1-inch pieces until you have ¾ cup asparagus. Rinse, remove the seeds, and cut a red bell pepper into ½ cup of thin slices.

Rinse and cut cucumber into ½ cup of thin slices. Rinse and shred 1 cup cabbage. Peel and finely chop 7 cloves of garlic. Remove the ends, rinse, and spiralize 3 cups of zucchini (or, use a vegetable peeler to shave the zucchini into long, thin strips).

3. Pat yourself on the back. That was a lot of vegetables!

4. Once the vegetables are prepped, make the Spaghetti Squash Lasagna. Use a large spoon or fork to scrape the spaghetti squash from its skin. Transfer to a clean kitchen towel or colander and gently squeeze the squash to remove any excess moisture.

Heat 3 tsp. olive oil in a large skillet over medium-high heat. Add ¾ cup of the diced onions and ¾ cup of the sliced mushrooms to the skillet; cook until the onion is translucent and mushrooms have softened (about 5 minutes).

Add 1½ cup spinach to the skillet, cooking just until spinach has wilted (about 2 minutes). Remove the vegetables from heat and set aside. Add 1½ cup marinara sauce to the skillet and stir to combine.

Assemble lasagna in an 8”x8” baking dish by layering half of the spaghetti squash, followed by half of the ricotta cheese mixture, half of the vegetable mixture, and half of the mozzarella cheese; repeat layers with the remaining ingredients.

Place the baking dish in the 425°F preheated oven for 45 minutes or until the cheese is bubbling and begins to turn golden brown. Set aside to cool and turn oven off. Once cool, divide the lasagna into three large storage containers.

4. While the lasagna bakes, make the Chickpea Vegetable Soup. In a large saucepan, heat 3 tsp. olive oil over medium-high heat.

Add ¾ cup of the diced onions, 3 cloves of chopped garlic (approximately 3 tsp.), and ¾ cup of the sliced mushrooms to the saucepan; cook until the onion is translucent and mushrooms have softened (about 5 minutes).

Next, add ¾ cup of shredded carrots to the saucepan and cook for an additional 5 minutes. Open, drain, and rinse two 15 oz. cans of chickpeas.

Add 3 cups of chickpeas, 3 cups of vegetable broth, ¾ cup of chopped swiss chard, and 3 tsp. of Italian seasoning to the saucepan. Cover, reduce heat to low and simmer for an additional 20-30 minutes until chard is soft. Set aside to cool, then portion into three storage containers.

5. While the soup is simmering, prepare the Zucchini Noodle Stir Fry. Coat a large skillet with nonstick cooking spray and place over medium-high heat. Add ½ cup of the diced onions, 4 cloves of the minced garlic (approximately 4 tsp.), and ½ cup of the sliced mushrooms to the skillet; cook until the onion is translucent and the mushrooms have softened (about 5 minutes).

Next, add 3 cups of spiralized zucchini and 1 cup of shredded cabbage to the skillet; heat for an additional 5 minutes, making sure all ingredients are well combined.

Add 4 tsp. sesame oil and stir to combine. Remove from heat and set aside to cool. Once cool, divide the vegetable mixture between 2 large storage containers; top each with 1 or 2 tsp. reduced-sodium soy sauce and 1 Tbsp. sesame seeds, then cover and refrigerate.

6. Prep the Seasonal Omelettes. In a large skillet, heat 3 tsp. coconut oil over medium-high heat. Add ¾ cup of the diced onions, ¾ cup of the sliced mushrooms, and ¾ cup of the chopped asparagus to the skillet; cook until the onion is translucent, and mushrooms and asparagus have softened (about 5 minutes).

Next, add ¾ cup spinach to the skillet, cooking just until spinach has wilted (about 2 minutes). Prepare three individual omelets. For each, whisk 2 eggs, seasoning with salt and pepper, if desired, and cook in a small skillet with 1 tsp. coconut oil.

Cook eggs over medium-low heat until eggs are set, then place ⅓ of the vegetable mixture in center of eggs and fold ends over. Repeat all steps two more times.

Or, make a scramble: Heat 3 tsp. coconut oil over medium heat, add 6 scrambled eggs and all cooked veggies, stirring until eggs are set. Divide between three containers. Serve with a slice of whole-grain toast.

In a large skillet, heat 1 tsp. coconut oil over medium-high heat. Pour or scoop batter into skillet, using approximately ¼ cup of batter for each pancake, and making 3 pancakes per batch.

Repeat process of heating more coconut oil and making pancakes until all batter is used. Note: We made 12 pancakes in 4 batches; however, if using a smaller pan, reduce the amount of coconut oil you use per batch. Divide pancakes between 2 storage containers.

When ready to eat, top with ½ banana and drizzle with freshly squeezed lemon juice if desired.

8. Next, prep the Hummus Veggie Wraps. In a small saucepan, bring 1 cup water to a boil. Add ½ cup uncooked quinoa, reduce heat to low, and cover for 15 minutes or until quinoa is tender. Set aside to cool.

Tightly wrap swiss chard leaves around each stack of vegetables, rolling each into the shape of a burrito. Secure wraps with toothpicks if needed. Place into two food storage containers.

9. Prep the Greek yogurt snack by placing ¾ cup yogurt and 1 Tbsp. chia seeds into five storage containers. Top each with one peeled orange divided into segments. Place in fridge.

10. Make the Shakeology Smoothie each day when by blending 1 scoop Shakeology with ½ banana, water, and ice.