For many of us, nighttime workouts are nirvana — running through dark streets without having to deal with cars or commotion, picking a machine — any machine — at your leisure instead of waiting in line, or getting in an evening workout with your favorite Beachbody Super Trainer.

But is working out before bed a risky move?

In the past, we’ve been told working out before bed can really screw with your sleep.

Exercise jacks up your heart rate and raises your core body temperature.

It also sends stimulating hormones such as cortisol and adrenaline coursing through the body. All of this couldn’t be ideal for fluttering eyelids, right?

A study in the Journal of Sleep Research found that people who exercise vigorously for 35 minutes before bed slept as well as they did on nights when they didn’t.

And a poll by the National Sleep Foundation found 83 percent of people who exercised — regardless of the time of day — reported better and more restful sleep than those who didn’t work out.

So why doesn’t working out before bed sabotage our sleep goals? 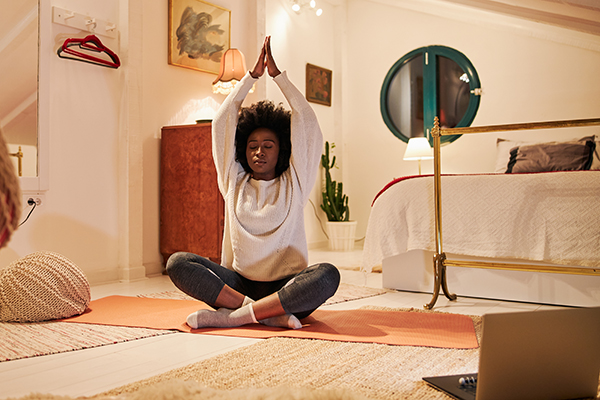 “Most people experience a drop in those stimulating hormones like cortisol and adrenaline within an hour or so after they work out, which puts your body in that relaxed, ready-to-sleep state,” says personal trainer Noam Tamir, founder and program director of TS Fitness studio in New York.

Loose muscles and a dropping body temp can relax you as well.

“So while you probably don’t want to hit the sheets 10 minutes, or even a half-hour, after exercising, most people can get solid shut-eye if they lay down an hour or two later,” he adds.

Have a Bedtime Snack

Exercise utilizes a lot of nutrients, which are further depleted at night as you sleep.

If you’re on a strict diet, you run a risk by working out before bed then not eating to recover from the workout prior to hitting the sack.

If you’re on a low-calorie diet and plan to train hard at night, you should follow your workout with a nutritional recovery strategy, like an overnight protein supplement.

Or have a small meal before going to sleep.

There’s nothing wrong with working out before bed.

Just follow nutritional protocols that don’t leave you depleted and starving when you wake up, or worse, lead to pain so severe that you wake up in the middle of the night.

This is a common issue with bodybuilders and fitness trainers getting ready for competition. This is not ideal because it means your body is essentially bonking during sleep.

And while that’s okay if your goal is to pose in front of a crowd with absurdly low body fat, like a bodybuilder, it’s also a sign of starvation.

If done too long, it’ll cause your body to begin to shut down its metabolic processes.

Every body reacts differently to working out. Some people simply have a hard time winding down after an evening workout.

That’s especially true if they just kicked butt or were doing something super social and stimulating.

If late-night sweats turn you into the Energizer Bunny, skip ’em.

If you don’t generally sleep well or struggle with insomnia, a morning or early evening workout might be your best shot at reclaiming some of those lost z’s.

“I typically tell my patients to minimize exercise within three hours of bedtime,” says Lisa Medalie, Psy.D., a behavioral sleep medicine specialist at the University of Chicago who treats patients with sleep disorders.

Insomniacs may want to experiment with workout timing depending on their sleep issues.

A study from Appalachian State University found that people who lifted at 7 AM fell asleep faster than those who either didn’t work out at all or pumped iron in the afternoons and evenings.

Those who did their workout at 7 PM, meanwhile, slept through the night better than sedentary peeps and morning exercisers.

Build More Strength By Working Out Before Bed

There are other perks to working out before bed. Hitting the gym can keep you from overeating or drinking after work.

And exercise is the best way to release tension that’s built up at your nine-to-five. Just make sure you’re eating enough and hydrating adequately.

That way you won’t wake up in the middle of the night with a rumbling stomach after incinerating all those calories. A small protein snack before bed can help.

Afternoon and evening workouts are also the best time to build strength.

Here’s why: Your body temperature climbs throughout the day, peaking between 4 PM and 6 PM.

As it rises, so does muscle strength and power, according to a study in the Scandinavian Journal of Medicine & Science in Sports.

Scottish researchers report that exercise-induced increases in testosterone production are greatest in the late afternoon and early evening.

If you’re looking to maximize strength gains, it’s best to schedule your workout for after work.

But there’s always a “but.”

In this case, it has to do with a principle known as “temporal specificity.”

This states that your body will adapt to be strongest at the time of day during which you normally train.

So while you might initially benefit from late afternoon or evening strength workouts, you’re better off scheduling those workouts for whenever they’re most convenient for you.

Best Time to Exercise: Whenever You’re Most Likely to Do It

Whatever workout slot you prefer — morning, afternoon, evening — the key to better sleep is consistency.

If the thought of waking up before the sun rises to exercise before work stresses you out, don’t force it. Working out before bed might be the thing for you.

Ultimately, do what works best for your schedule, personality, and mindset. The fewer potential excuses you can give yourself for skipping workouts, the better.

If you’re deciding between getting in a workout or spending another hour under the covers, consider how good you’ve been lately at scoring those recommended 7 to 9 hours of sleep.

“If you’re someone who normally gets enough sleep, it’s fine to put that hour toward sweat once in a while,” says Tamir. “But if you’re in a deficit, stay in bed. Sleep is important for a strong body.”

In the final analysis, the best time of day to exercise is when you have the most energy and motivation — in short, when you’re most likely to do it.

In fact, scheduling your workout for the time of day that works best for you will almost always produce the most dramatic ones.

This is because it increases your odds of maximizing the most important workout variable of all: exercise adherence.