Pre-COVID-19, working out at home was a convenient option.

Now it’s an essential part of our new normal — today and in the foreseeable future.

In fact, according to a survey of adults who exercise regularly, 87% of those who already or will feel comfortable returning to the gym will keep at-home workouts as a part of their fitness routine.* 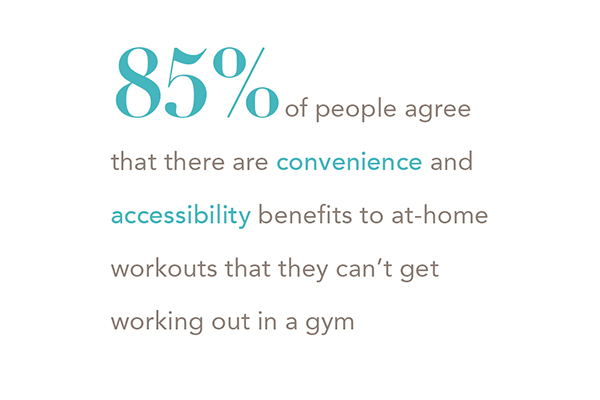 Read on for more results from the Future of Fitness Survey:

Americans have embraced working out at home to keep up with their exercise and fitness routines.

Concerns about getting out of shape during the lockdown faded as Americans realized how effective their at-home routine could be.

More than 4 in 5 (86%) say their at-home workouts have been as good or better than they expected — including 46% who say home workouts exceeded their expectations.

Americans are finding their time invested in workouts at home to be quite productive.

An overwhelming majority (90%) of adults who exercise describe their at-home workouts as effective, including a majority (54%) who say it’s been very or extremely effective.

Gyms are expected to continue to be a vital part of working out, but a vast majority (85%) of adults who exercise plan to do so at home over the next three months, either inside (67%) or outside (54%) or both.

Those who exercise at home are in sync as to what their approach to working out is going to look like in the new normal.

Once they return to the gym, around 9 in 10 (87%) adults say they’ll also keep working out at home, with most (53%) saying they’ll do so frequently or all the time.

Results of any sample are subject to sampling variation. The magnitude of the variation is measurable and is affected by the number of interviews and the level of the percentages expressing the results. For the interviews conducted in this particular study, the chances are 95 in 100 that a survey result does not vary, plus or minus, by more than 3.1 percentage points from the result that would be obtained if interviews had been conducted with all persons in the universe represented by the sample.