We’ve all been there — it’s almost bedtime but you’re feeling a little peckish, so you head for the kitchen for a quick snack. But then you think, “Oh wait; is it bad to eat before bed?”

There’s plenty of scientific data supporting the idea that eating before bed may cause you to gain weight, but there’s also a good amount of evidence that appears to refute that notion.

So where does the truth lie? In the details, that’s where!

So let’s drill down to get a handle on the pros and cons of grabbing something to eat before bed.

Will Eating Before Bed Make Me Gain Weight? 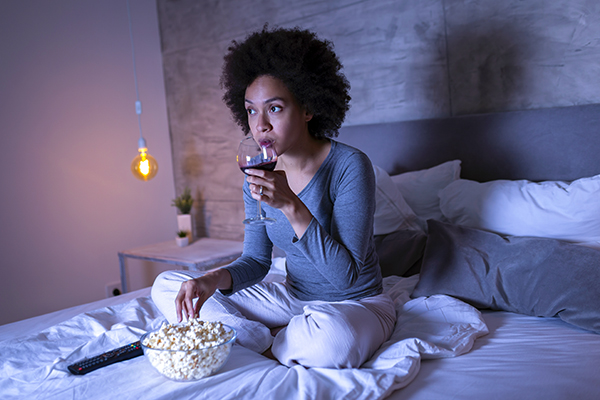 It’s fairly intuitive to think that eating before bed is going to lead to weight gain. Food, after all, is the fuel that we convert into energy — something that sweet slumber doesn’t require too much of, right?

Well, no, not exactly.

We may not move around much while we sleep, but beneath the surface, calories are being burned at quite a clip.

A surprising amount of energy is required to support vital functions like maintaining a stable internal temperature, repairing cells, making hair and nails grow, pumping blood around, and yes, digesting what we ate in the hours leading up to bedtime.

In fact, during a solid eight hours between the sheets, our snoozing bodies will burn through several hundred calories.

That said, you definitely burn more calories when you’re awake, so hitting the sheets on a full stomach is probably not a great strategy for achieving or maintaining a healthy weight.

Are There Benefits to Eating Before Bed?

But consider these two things before you commit to fasting between sunset and sunrise.

Firstly, going to bed with a rumbling tummy is not much fun and it can make it difficult to drift off to sleep.

Given the strong possible link between not getting enough sleep and higher weight — a study of 1,001 participants published in the Archives of Internal Medicine reported that, on average, overweight or obese participants got 16 minutes less of sleep per day (which adds up to nearly 2 hours a week) than those with a BMI of 22 (± 1.8) — compromising the duration and quality of your shut-eye makes it harder to reach your goals.

Secondly, if you’re working out on a regular basis, nighttime is one of the primary times when muscles recover and grow.

And, that’s a lot easier to do when your body has some fuel in the tank, especially protein.

A study in the August 2012 issue of the Journal of Medicine & Science in Sports & Exercise showed that participants who lifted weights for an hour, consumed 40 g of casein protein, and then went to bed experienced a 22 percent rise in amino acid circulation for a full 7.5 hours of sleep.

In other words, consuming casein before bed meant that their muscles had better access to the building blocks they need to recover and grow.

So, from all this, we can distill the following answer to the question above: Go to bed neither ravenous nor full.

Some resistance training, followed by a small, protein-rich shake, may be a good way to make food and sleep work together for your benefit.

What Is the Best Time to Eat Dinner? 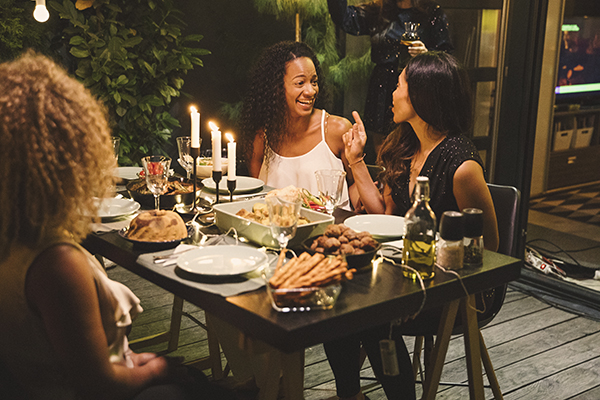 Do you tend to go to bed the same time each night? Let’s suppose your normal bedtime is around 11:30PM.

You’ll want to have finished eating your evening meal by 8:30PM at the latest.

Here’s why: A three-hour buffer means that by the time your head hits the pillow, your dinner will have left your stomach and be on its way through your small intestine.

But it won’t be so long that you’ll feel hungry, especially if you ate a balanced dinner comprised of satiating protein, complex carbs, and veggies.

Some Tips to Help You Stop Eating Before Bed 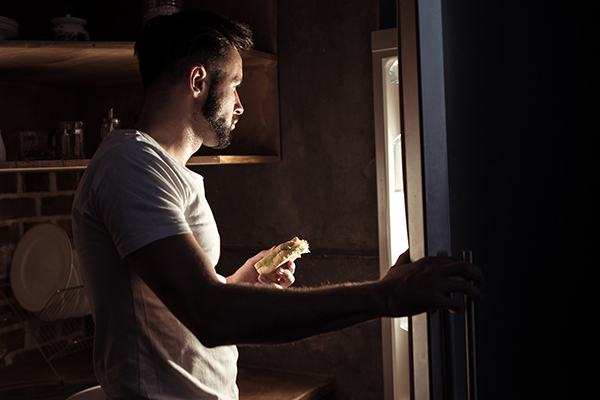 Even if you stick to the three-hour rule, getting through the evening without acting on the urge to start poking around in the fridge for a little something to nosh on can be tricky.

Nighttime can often be when our resolve tends to weaken.

One of the reasons for all that fridge rummaging may not just be related to how much TV we watch, but also to the kinds of shows we’re into.

Cornell University researchers found that people who watched action-packed programming (the sci-fi thriller The Island in this case) ate twice as many calories as participants who watched something calmer (researchers used The Charlie Rose Show.)

There’s also the reality that we have several hours to fill before bed and a cornucopia of goodies within fairly easy reach.

Checking out the fridge can become a habit. So start a couple of other counter-habits.

First, check in with yourself to ensure you’re actually feeling hungry as opposed to bored.

Then, if you are hungry, drink a large glass of water. There’s a very strong possibility, especially if you recently ate dinner, that you’re actually thirsty!

What Are Healthy Bedtime Snacks?

Sometimes no amount of water, mindfulness, or a plodding Netflix drama will change the fact that the gap between dinner and bedtime has grown too large and you’re now famished.

Not a problem. As mentioned above, an hour of resistance training followed by a small, protein-rich snack will allow you to cure your rumbles without going off the rails.

In fact, there’s a growing number of recent studies, including this one from the University of Western Australia, that suggest a strenuous workout alone can temporarily suppress appetite.