“Age is just a number.” This might be true, but according to the New York Times, you have a second number to think about: your fitness age.

The article was based on research published by the Norwegian University of Science and Technology in Trondheim, which examined the VO2 max of almost 5,000 research participants.

VO2 max is the maximum amount of oxygen lungs can store and hold during exercise and one indicator of fitness level.

Once you know your VO2 max, you can compare it to people your age. For instance, a fit 40-year-old could have a similar VO2 max as an average 20-year-old. On the other hand, if that 40-year-old barely exercises, they could share the same stats as a sedentary 70-year-old.

Measuring your VO2 max is no easy task, as it requires specialized equipment to analyze oxygen intake and carbon dioxide output during physical exertion. Generally, subjects wear a breathing mask attached to the equipment as they run on a treadmill (the test is done in a laboratory setting). However, researchers in Trondheim found an algorithm that can estimate your VO2 max and determine your approximate fitness age.

What Is My Fitness Age?

By filling out this questionnaire (which only takes a few minutes), you can determine how fit you really are and what age bracket you’d fall in. Here’s mine as an example: 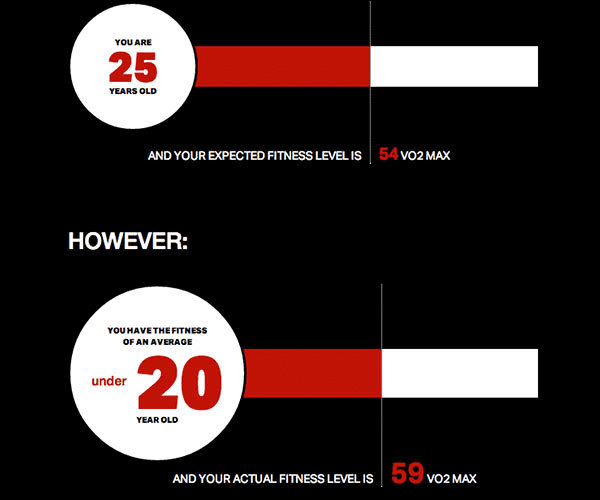 No, the survey won’t be as accurate as going to a laboratory, but it probably provides more useful information than reading your horoscope. Another study pulled data from over 55,000 people in Norway who filled out a non-exercise test (very similar to the questionnaire) from 1984–1986. The researchers then pulled death records 24 years later of those same people to see if there was a correlation. The study found those with a VO2 max 85 percent or below the rest of their age group had an 82 percent higher risk of dying early. This data supports previous research linking a high cardiorespiratory fitness level to a substantially lower coronary heart disease mortality rate.

Luckily, your fitness age is entirely up to you. To turn back the clock, just get up and start moving.

What was your fitness age? Were you surprised by your results?

How to Stop Procrastinating — Read This Now

Here’s What You Need to Know About Wrist Pain