If your goal is to get stronger or gain muscle, resistance training is key.

Why? Because resistance exercise challenges your muscles, and when muscles are repeatedly challenged, they adapt by increasing the size and amount of contractile proteins within each muscle fiber.

Nutrition also plays an important role. There are countless supplements on the market that claim to help you perform better, get stronger, gain muscle, lose fat, and more.

It can be a challenge to make sense of it all, and unfortunately, there’s a lot of misinformation out there.

With that in mind, here’s the real scoop on the science behind some of the key ingredients in Beachbody Performance that can help increase muscle strength, power, endurance, and size. 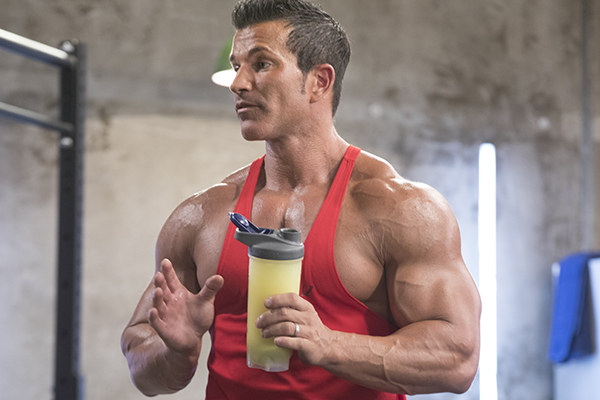 Beta-alanine: shown to increase muscle buffering capacity to help you work out harder and longer.

Beta-alanine is required for the body to make carnosine.

In muscle, carnosine acts as a buffer, neutralizing hydrogen ions (a byproduct of lactic acid metabolism) produced during exercise.

Too many hydrogen ions can decrease muscle pH, lead to muscle discomfort (i.e., ‘the burn’), and diminish muscle strength.

Regular consumption of beta-alanine has been shown to increase muscle carnosine, in turn increasing the buffering capacity of the muscle and allowing the muscle to work harder and longer.

By helping athletes train harder, beta-alanine may help support larger improvements in strength and performance than would be achieved through training alone.

Caffeine has been shown to be ergogenic, helping to reduce perception of effort, delay fatigue, and improve focus.

In one study, low-dose caffeine increased measures of muscular fatigue threshold by 45 percent and maximal power output during resistance exercise by 16 percent.

In another study, athletes reported that vigorous exercise felt easier, and average power output during all-out exercise was greater when they consumed Energize compared to placebo.

Research has shown that even mild dehydration (commonly referred to as hypohydration) may limit strength and power, thereby hampering resistance exercise performance.

Hydrate is formulated with a specific ratio of water to carbohydrates and electrolytes shown to help speed gut fluid absorption and restore hydration better than water alone.

Moreover, Hydrate combines two forms of carbohydrate, and consuming more than one form of carbohydrate has been shown to help reduce gut discomfort and further aid fluid absorption.

In one study, subjects produced more force during exercise and improved strength recovery 48 to 72 hours after a strenuous bout of exercise when using pomegranate extract compared to a placebo.

It’s also critical for the repair, growth, and adaptation of muscle in response to training.

In fact, post-exercise protein intake has been shown to help increase gains in muscle mass and strength during prolonged resistance training.

They’re All Effective, But How Fast Are They?

Whether you’re an elite athlete or you’re just starting a training program, there are several evidence-based nutritional approaches available to help support your training, performance, and recovery.

When using nutritional supplements, it is important to keep in mind that some have been shown to work right away, whereas others may need to be consumed regularly for days, or even weeks, before they have significant effects.

Some of the active ingredients in Beachbody Performance work acutely, meaning their effects occur within minutes or hours of ingestion:

For example, the low-dose caffeine (found in Energize) has been shown to improve energy, reduce perception of effort during exercise, and increase exercise performance within 30 to 60 minutes of ingestion.

Carbohydrates and electrolytes (found in Hydrate) have been shown to improve water absorption and hydration status within minutes to hours of ingestion.

Similarly, protein (found in Recover) has been shown to increase muscle protein synthesis in the hours following ingestion. However, it may take weeks or months before you see measurable changes in muscle mass.

Other active ingredients must be consumed regularly for days or weeks before they have significant effects:

In most research studies to date, pomegranate and tart cherry (found in Recover) were given to study participants for several days before researchers evaluated their effects.

Beta-alanine (found in Energize) must be used for several days to weeks before muscle stores of these compounds are high enough to have a significant effect on exercise performance.

Nutritional supplements with the right ingredients can help you reach your peak potential.

The Peak Performance Project (P3) is a training facility in Santa Barbara, California, where many of the country’s top athletes go to become even stronger, faster, and fitter.

The Beachbody Performance line of supplements is designed to help people achieve those same goals, so it seemed only natural to partner up.

P3 Founder Dr. Marcus Elliot and Beachbody co-founder Jon Congdon discuss how Beachbody Performance supplements can help you supercharge your training—regardless of whether you’re an elite athlete or a nine-to-fiver.