Summer is in full swing with BBQs, beach days, and…well, pretty much any excuse to soak up the sun. The prediction for this holiday weekend? All of that, plus fireworks!

Whether you’re kicking off celebrations today or waiting until Saturday, there might be one more thing you should consider this weekend: air pollution. We’re talking about sneeze-inducing, asthma-provoking, sun-shading air pollution. If you live in a city like Los Angeles, this is probably nothing new to you. But the special thing about July 4th (other than giving you a reason to break out the American flag-themed apparel) is that air pollution gets particularly worse thanks to those magnificent fireworks.

A recent study found that there’s a sharp increase in particulate matter on July 4th because of increased firework usage. Particulate matter is pretty much what it sounds like: a bunch of tiny particles. Even though they’re small, they can do some major damage because they can get deep into your lungs and even impact your heart. So, sadly, damaging your hearing isn’t the only lasting impact fireworks can have on your body. 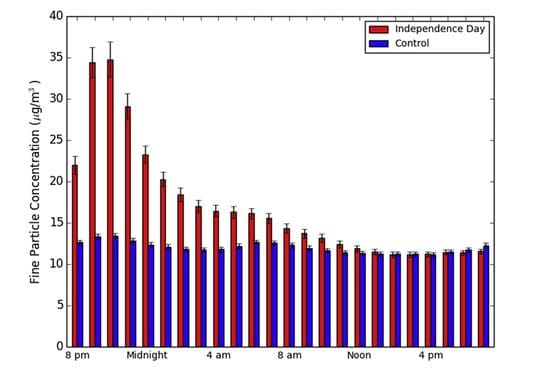 Thankfully, there are a couple of steps you can take to protect yourself from the particulate matter. You could stay inside all day. But, we are going to guess you don’t want to do that. Yeah…we didn’t think so.

Choose your time wisely
The study found that the highest concentration of particulate matter appeared between 9 and 10 PM on July 4th. Average concentrations at that time are 42 percent higher than on July 3rd and July 5th, but should be back to a normal level by noon on the 5th. This means that if you’re going to be outdoors on Independence Day, morning and early afternoon are the best times to get in the bulk of your outdoor activity. Just make sure to wear sunscreen.

Keep your friends close and your medicine closer
Since you’ll probably want to be outside even during the hours of higher air pollution (i.e., when the fireworks go off), we recommend having quick relief medicine in a handy location if you suffer from asthma. Also, the effects of particular matter are stronger – both in the long and short term – on children, older adults, and those with pre-existing heart or lung conditions, so be ready to act if something goes awry. Which brings us to our next point.

Location, Location, Location
At firework shows, location is key. You want to be close enough to see them, but far enough away to avoid the falling sparks. You also might want think about sitting up wind to avoid as much of the firework’s air pollution as possible, especially if you’re sensitive to it.

Autumn Calabrese Pays It Forward at Hope of the Valley