Big Orange Cycling prides itself on welcoming new riders and providing existing members with the resources they need to achieve racing success, explains Greg Leibert, Big Orange president and one of the six original members. As the team has gained popularity within the local community and beyond, a variety of sponsors have stepped up to help the team take their racing to the next level and crush the competition, season after season. And we’re proud to announce that Beachbody has stepped up as Big Orange’s title sponsor. As part of the deal, we’re supplying members of the team with Beachbody Performance, our brand new top-of-the-line performance supplements.

Now, Big Orange racers have a stack of supplies to help them accelerate through their training and fly through the finish line. The Beachbody Performance line was designed to be a series of functional supplements for any athlete, but they are especially useful for endurance athletes.

“Our university-based clinical trials are testing our products on cycling time trial performance, high-intensity cycling performance, power output, and hydration status, and performance responses in trained endurance athletes,” explains Dr. Nima Alamdari, Beachbody’s Director of Scientific Affairs, explaining how we’re in the process of doing research specifically on cyclists. “We’re also testing the effect of our recovery aids on functional muscle recovery and adaptations. All of this is really compelling to the needs and wants of endurance athletes, whether in training or competition.” 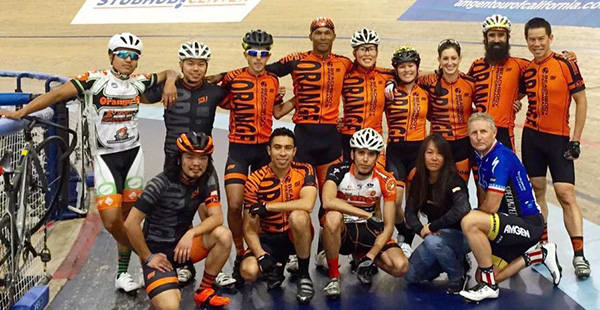 Currently, the elite Big Orange athletes are using four of the Beachbody Performance supplements: Energize, Hydrate, Recover, and Recharge. Energize functions as a pre-workout or pre-race drink that fuels riders with caffeine, quercetin, and beta-alanine. Hydrate helps them stay in it to win it with a hypotonic electrolyte mix that’s specifically target for endurance athletes. Both Recover and Recharge are made with targeted proteins that help repair muscles and lessen exercise-induced soreness, both of which are important for anyone who is exercising for multiple hours within a day.

“We first started talking about the Beachbody Performance line because it has a lot of products that can help many different people in whatever capacity they want to use it,” says Leibert. As a cyclist who has 20 years of experience under his tires, he is no stranger to performance supplements. He likes what he has been seeing in his training since starting to use Beachbody Performance and feels like the ingredients have beneficial effects on his body. “I’ll use Recover immediately after my workouts, and at the end of the evening I’ll use Recharge,” says Leibert.

Leibert has hopes that this sponsorship will continue, with the possibility of it reaching down toward all of the athletes, and not just the elite group. “I absolutely recommend it to help people get to the next level,” he says. “I wouldn’t have considered the sponsorship if I didn’t think it could.”